While many travelers have returned home with snow globes, Debra Otto has unpacked knobs. “They have a useful aspect to them,” she explains. “I always planned to use them some day.” The collection that includes finds from flea markets in Europe and the Sawdust Festival in Laguna Beach adorns cabinetry throughout the 825-square-foot cottage she and her husband, Phillip Bell, bought in Oceanside. “I thought having all matching knobs would be boring for this little beach house,” Debra says. “We did design which knobs went in each area, so it wasn’t quite arbitrary,” adds interior designer Heather Moe. “For example, in the kitchen, we used sea-life-themed knobs.” Living in McAllen, Texas, Debra and Phillip had ties to San Diego’s North County. Debra’s mother lived in San Marcos and her brother in Escondido. “We were looking for a place to split our time,” Debra says of the McAllen/Oceanside residences. “We had been looking in the area and knew basically what was on each street — which streets were closer to the water. When this house appeared on the market, we were in Texas. Real estate was ‘flying off the shelf,’ so we sent my brother to scope it out.” 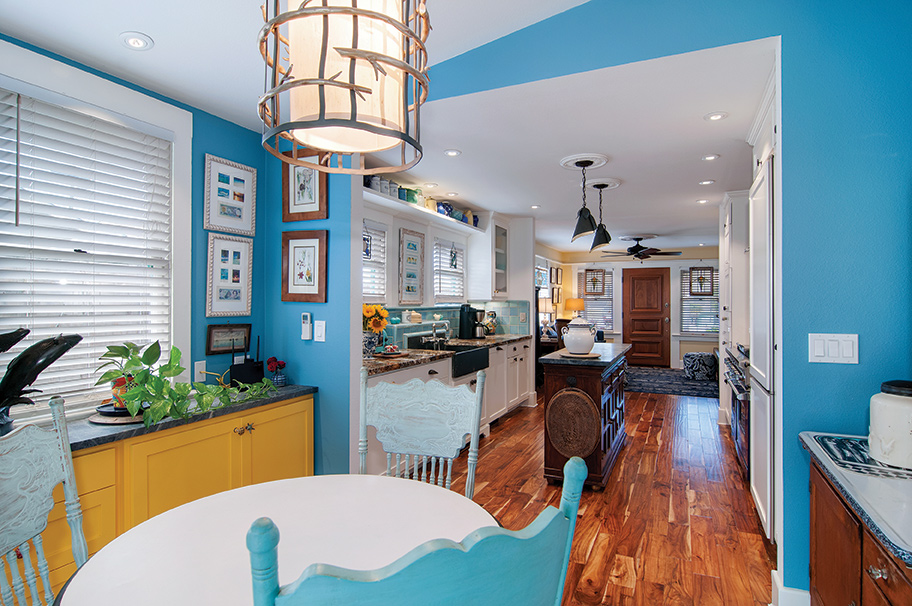 Built in 1923, the house was in such disrepair that some people might have considered tearing it down. “It was sad. It was a cute little house,” Heather says, noting that it had a picket fence. Keeping details such as a wainscot linen closet door and picture rails, Heather opened up the space between the kitchen and dining room and in the latter (a one-time porch cum add-on) vaulted the ceiling. The rest of the project involved working with the existing floor plan and selecting materials, which include teak flooring throughout. “We wanted something with character, not so machined, something that could get dinged up with dogs [the couple had three at the time] and sand and life,” Debra says. Communicating online, Heather sent her clients what she calls “a very tasteful, conservative, calm” color scheme. “They just sent it right back to me,” she says with a smile. “They wanted something a little more exciting.” 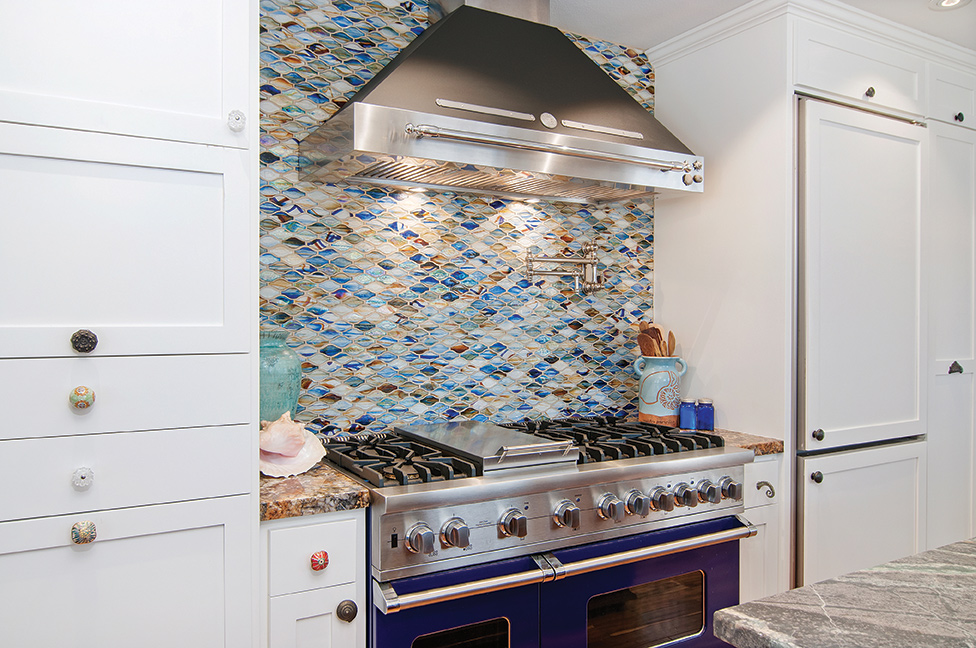 “My mother was the queen of beige,” Debra says. “I am the polar opposite.” Built-in cabinetry in sunflower yellow (a color Heather chose after seeing one of Debra’s purses on a table) plays happily with turquoise blue walls. Debra and Phillip had already purchased a richly colored and veined slab of granite for the kitchen countertops. Heather paired the mostly gold-brown stone with a patterned blue and brown Oceanside Glasstile backsplash behind a cobalt blue Viking range. Hand-painted, light turquoise tiles serve as the sink-side backsplash, while soapstone with hints of turquoise tops the island (a rosewood furniture piece Debra found in a local store) and dining room cabinetry. Bright white window and door frames, ceilings and Shaker-style cabinets add a clean aesthetic to balance the mix of objects and hues. In the master bedroom, Heather lined the interior wall with built-in white cabinetry and Debra mounted the closet door from the guest bedroom (removed to create a dresser niche) on the opposite wall. Painted aqua, fitted with a glass knob and hung horizontally, the Shaker-style door serves as the bed headboard. In keeping with the home’s 1920s aura, Heather used marble for floors and walls in both bathrooms. In the guest bathroom, a horizontal band of pearlescent blue glass tiles breaks up the white. In the master bathroom, a wider band of glass tiles in turquoise features random gold accents that were added after the installation. “Debra brought me a set of real gold tiles and said, ‘Let’s throw in some gold,’” Heather recalls. A basket-weave pattern with blue accents covers the floor. Blue vessel sinks sit atop the granite vanity on a wood table-style base. A sheet of freeform-edged, cast glass with a nautilus design separates the  walk-in shower from the vanity. Antique bronze light fixtures and polished nickel, wall-mounted fixtures continue the adventurous intermingling of colors finishes, styles and objects. 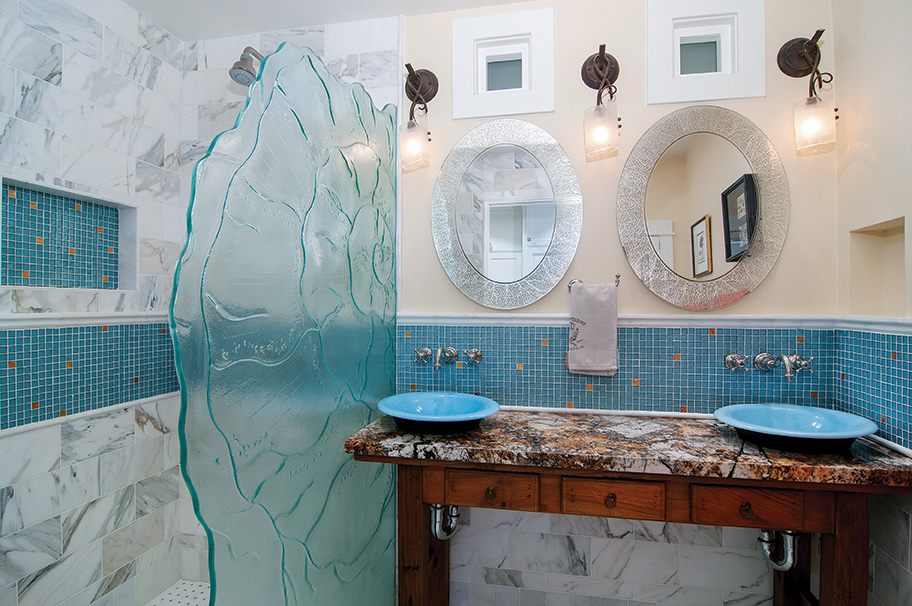 “Debra and Phillip sent me a file showing things that were coming here from Texas,” Heather says. “There was a certain mandate at that point that we had to keep mixing it up, and it started layering nicely.” Among the objects to be incorporated was a 10-foot-long antique bench that just fits along one wall of the entry living space. Another was an antique marble kitchen sink that Debra picked up on a trip to Colorado. Like the knobs, it was something she knew she would someday use. As for the pairing of Heather and her clients, it may have been fated. “We routinely go to the Cruisin’ Grand car show on Friday evenings in Escondido. Heather’s office is on Grand, and their signage caught our eye,” Debra says. “They had dog biscuits in a bowl out front. Phillip said, ‘They’re dog people. Let’s see what it would be like to have a designer.’” 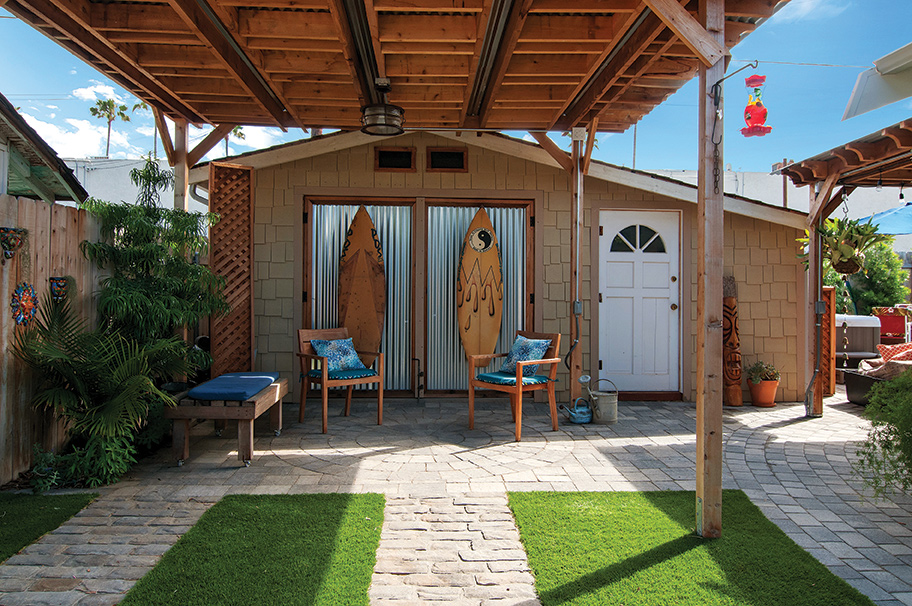