Over the next six months, the public has rare opportunities to study the lives and work of two modernist architects with strong ties to San Diego County. Through March 31, 2017, a collaborative program involving multiple organizations and venues show-cases the accomplishments of Irving Gill. Next month, San Diego Museum of Art shines its light on Louis Kahn.Irving J. Gill: New Architecture for a Great Country offers a broad, multifaceted view of an architect who was well known during his lifetime, but whose fame faded after his death. After training in the Chicago area with architect Louis Sullivan, the New York native came to sunny San Diego in 1892 to improve his health. Architecture that eschewed ornamentation largely inspired his design, and he pioneered building techniques that trimmed construction costs. Coordinated by Irving J. Gill Foundation, the program encompasses tours, lectures and exhibitions that include photographs, drawings and models. Each venue show-cases a different perspective on Gill’s work. His most well-known designs include the Marston House, La Jolla Woman’s Club and Bishop’s School. Dozens more of his projects were built around San Diego County and beyond. Many of them reflected the bur-geoning social justice movement of the early 1900s. Gill started working on experimental housing, including migrant agricultural worker residences, in the 1890s. Foundation President James Guthrie describes it as “real architecture for people who didn’t have a lot of money.” Whereas Gill’s wealthier clients had homes built with plaster on concrete bases, stucco siding on wood frames achieved the same visual and functional effects for less money. He asked himself, “How can I take what I know about architecture and make a decent home for a working man?” In 1932, Gill received a federal contract to design housing and a chapel for the Kumeyaay-Diegueño tribe on a reservation. “Imagine what it’s like, in the middle of the Depression, to go up above Lakeside and help them build,” James says. “He was literally digging foundations, making bricks.” The Barona Cultural Center and Museum, hosting a Stones in the Meadow exhibition, still has the forms that the architect and tribal members used to make adobe bricks. The San Diego History Center exhibit “will show things about Gill that people haven’t put together,” James says. One of the surprises: his long shadow in Europe. Rare photos of some of the earliest works by architects Mies van der Rohe and Le Corbusier show buildings that almost certainly were influenced by Gill. Other elements of the program delve into Gill as a “green” architect, calling out his use of natural shading, ventilation and insulated walls. 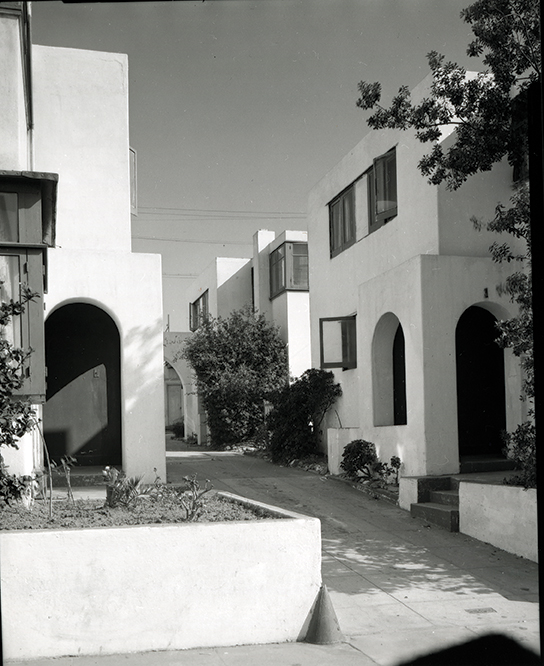 “He was so much on the cutting edge,” James says. The same could be said of Louis Kahn, who designed La Jolla’s Salk Institute for Biological Studies. His reach extends beyond the United States, as evidenced in Louis Kahn: The Power of Architecture. The touring exhibition — which originated at Vitra Design Museum in Germany and runs Nov. 5 through Jan. 31, 2017, in San Diego —  includes works from Kahn’s life inside the studio and out. It includes a large selection of his travel sketches and watercolors. “The intersection of architecture and sculpture excites me,” says Ariel Plotek, San Diego Museum of Art associate curator of modern art. “And there’s no architecture more monumental than Kahn’s. This show reveals many sides of the architect: life, scandal, ideas.”From the 1920s until his death in 1974, Kahn worked at the crossroads of different movements, incorporating ideas from antiquity, Craftsman style and the early 20th century into his modernist, even brutalist projects. Archival film that includes inter-views with contemporary architects sets his legacy in context, Ariel says.
The collection spans the breadth of Kahn’s studies and career, encompassing 10,000 square feet of museum galleries. At its center is a 12-foot-tall model of the never-built City Tower, proposed in the 1950s for Philadelphia, where he’d grown up and begun his career.
Studies, drawings and models from his studio provide a thematic line to his public work, including Bangladesh’s National Assembly and La Jolla’s Salk Institute. According to My Architect, the documentary made by his son, Nathaniel, Salk Institute was the first building with which the architect was really happy. A survey of the exhibition reveals some of Kahn’s patterns and priorities. Institutional works bear hallmarks of his residential projects, most of which were built earlier around Philadelphia. He approached designing homes the same way he designed institutions: by asking how people were going to use the space. “There’s a humility and modesty captured by the idea of asking questions, not merely imposing one’s personality and habits [on a project],” Ariel says. “There’s a value in letting the questions guide the exploration, out of which emerge solutions.” Kahn incorporated open floor plans and courtyards to encourage conversation and interaction. He used re positionable panels to shift lighting throughout the day. One of his favorite materials was wood, used as vertical paneling for houses and to break up concrete expanses in larger buildings. Kahn’s built works are fewer in number than many of his peers, so the exhibition is the only way for most people to see his myriad studies and explorations for unbuilt projects.

For more information, including event dates, visit irvingjgill.org and sdmart.org.