When Kurt and Bridy Oreshack bought their home in the Marston at Del Sur community in 2015, they wanted to create a resort-style back yard where kids could play while parents sipped cocktails nearby. The couple had been living in a 1,200-square-foot condo in downtown San Diego, where they enjoyed going out to the local bars and restaurants. The condo, however, soon became too small for their growing family. Their new 4,600-square-foot home offered more than enough room for Kurt, Bridy and their three children, but it needed something else. “When we came up here, we wanted to be as social as we had been, even though we weren’t as mobile,” Bridy says. “We wanted to bring the party to us. And that has been very successful.” Located between Rancho Santa Fe and 4S Ranch, the Marston at Del Sur development appealed to the couple because it was designed for families, with lots of pocket parks where neighbors can chat and kids can romp. It also brought nature to their door. “We were drawn to the natural beauty of the area,” says Kurt, indicating the canyon just beyond the patio, “and, in particular, this house and this lot.” They especially loved the panoramic-style doors off the living room and kitchen that, when open, dissolve the barrier between interior and exterior. “These doors are open from the minute we wake up to the minute we go to bed,” Bridy says. A covered outdoor space off the living room has a feature wall with a fireplace and nooks to place objets d’art. “It was important to us to do a really great job with the back yard — to stay faithful to why we wanted this house in the first place in terms of indoor/outdoor living and the canyon,” Kurt says. 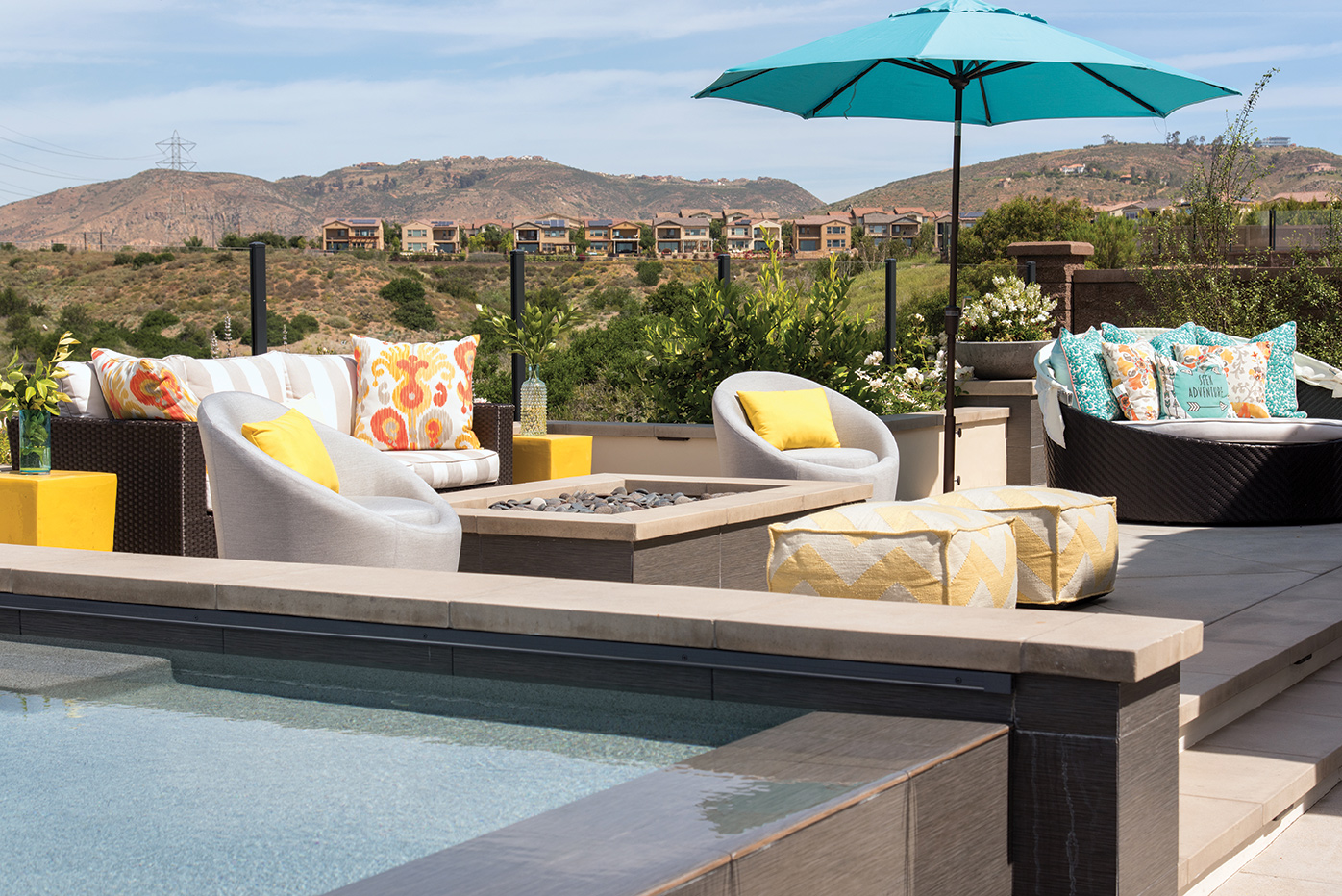 To help them achieve their goal, they hired designer Brittney Pearson, who transformed the back yard while creating a seamless transition from interior to exterior through the use of color and pattern. Brittney added a covered barbecue pavilion that operates as an extension of the kitchen through two large archways. The showcase piece here is a 12-foot-long, concrete table that seats 14. “There was no table big enough for the number of people we wanted,” Bridy says.So the couple had Brittney design one. It’s one of several pieces of furniture in the house that needed to be customized to create the look Kurt and Bridy desired. But Brittney limited expenses by finding existing furnishings and reupholstering them. 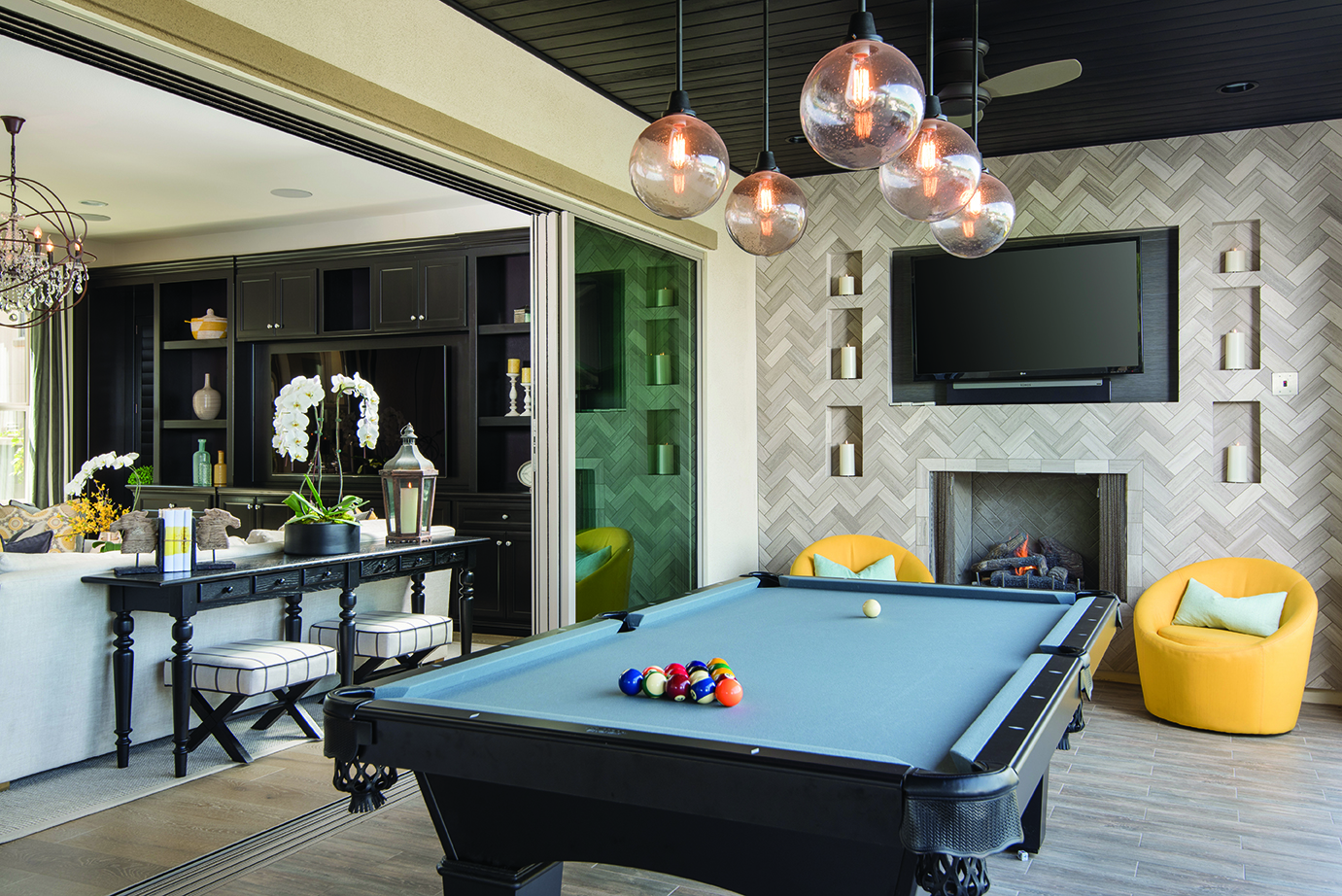 Almost every weekend, Kurt cooks on the grill for guests who dine at the table or sit on the chocolate-colored patio furniture with cushions in gray and white stripes accented by throw pillows in yellow, teal and coral. T wo oil-rubbed bronze chandeliers, each with 24 LED bulbs, hang from the dark tongue-and-groove plank ceiling and illuminate the gatherings below during the evening. “Our vision was to be very modern and use materials that were clean, with light grays, and have a very crisp appearance,” Bridy says. The couple specifically wanted the larger pieces of furniture in neutrals, so that it would be easy to switch out
accent pieces — from pillows to vases —to completely change the look. 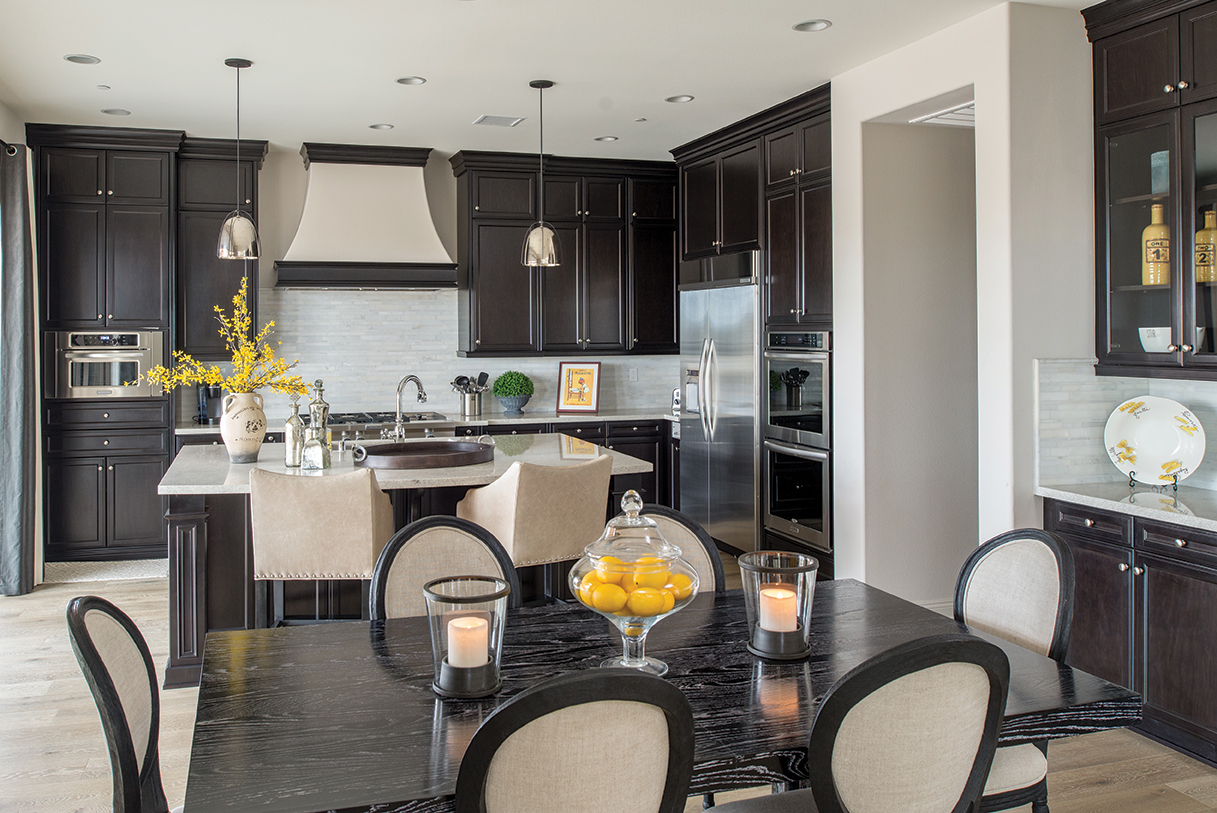 The interplay of dark brown with whites, grays and mochas punctuated with pops of color in the pavilion flows through the rest of the house and outdoors. For example, the dark chocolate plank ceiling of the covered space off the living room makes a striking contrast against the Chenille White lime-stone tile in a herringbone pattern on the feature wall. The same yin and yang plays out in the kitchen, where maple cabinets finished in Espresso coexist with white-and-gray granite countertops, and in the living room, where more Espresso cabinetry acts as a backdrop to sandy-hued sofas and gray-and-white wingback chairs. 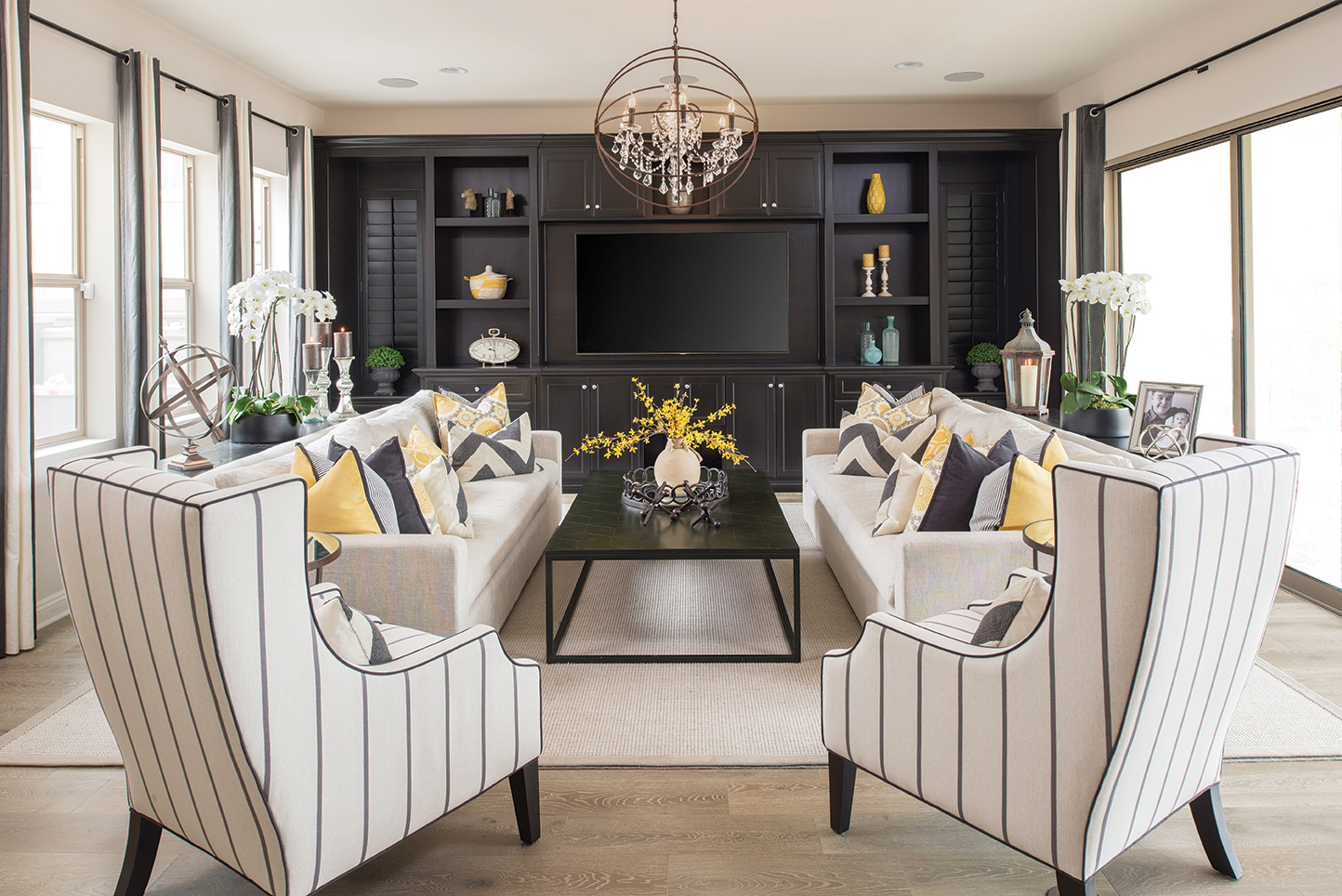 Upstairs, the duality of light versus dark is less prevalent. Light, neutral tones with splashes of coral dominate in the master bedroom and the baby’s room. Brittney also played with stripes to add a resort-style touch. Variations include skinny stripes on the wallpaper of the downstairs guest bathroom, chevron patterns on throw pillows in the living room and thick horizontal lines painted on the nursery walls. “I like to incorporate a little bit of stripe in all my projects,” Brittney says. The combination of stripes, bright colors, and light versus dark carries over to the backyard patio. 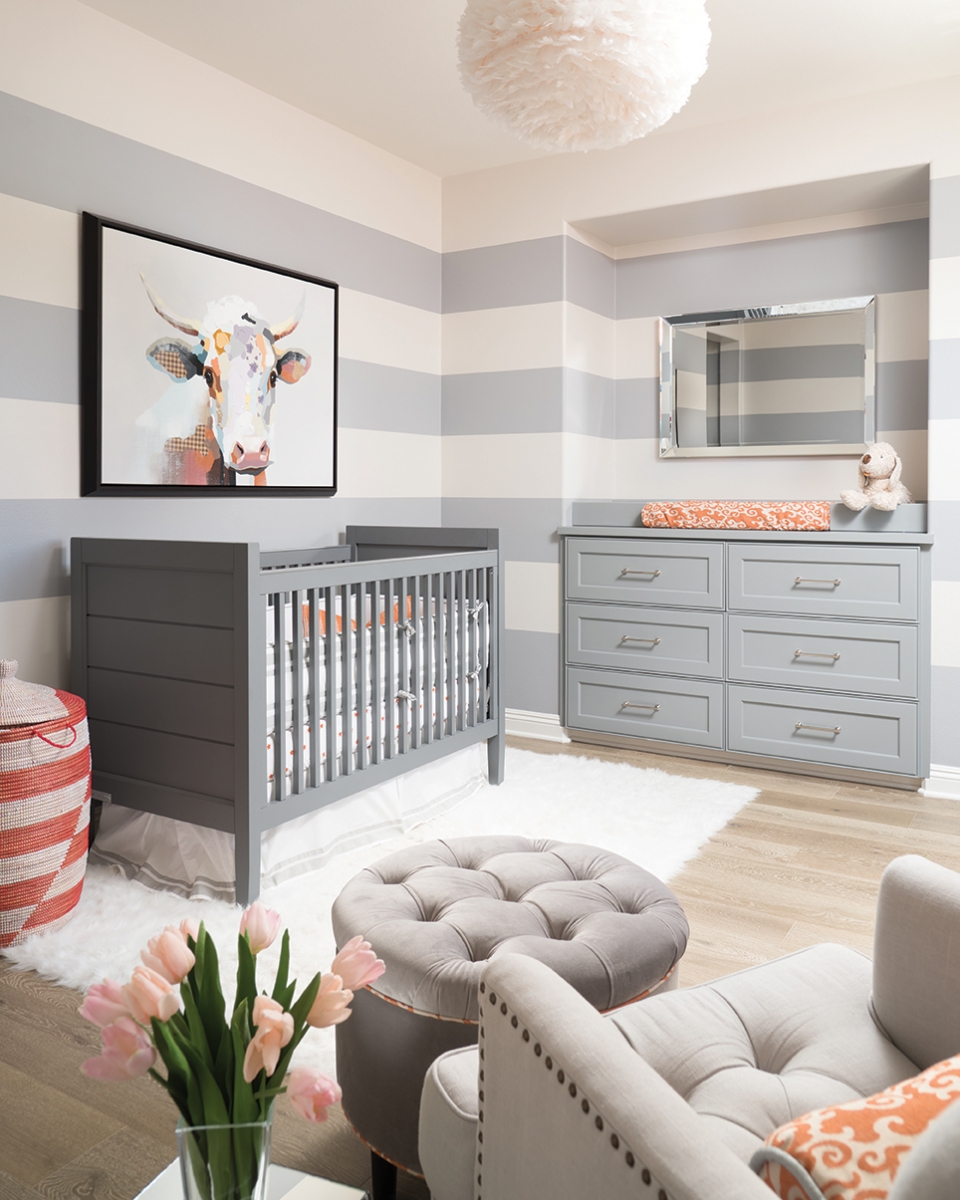 Striped patio furniture, as well as gray-and-yellow swivel chairs, yellow-and-white chevron poufs, and a canopy daybed sprinkled with teal throw pillows surround a gray, custom-made fire pit. Nearby, a pool — featuring gray porcelain tile and coping and wall caps in clay hues — shimmers in midmorning light. The pool has a spa that seats 10 and a Baja shelf where the kids can play or an adult can read in a lounge chair shaded by a teal patio umbrella. A fountain of the same gray porcelain tile fronts the length of the pool. The color scheme continues on what Bridy refers to as “the drinking patio” on the south side of the house. It’s a more intimate space, where the furniture is arranged around a fire pit and “happy hour” plants (lime trees, mint and basil) grow within reach. Just beyond stands a large fountain with a herringbone design and gray porcelain tile. 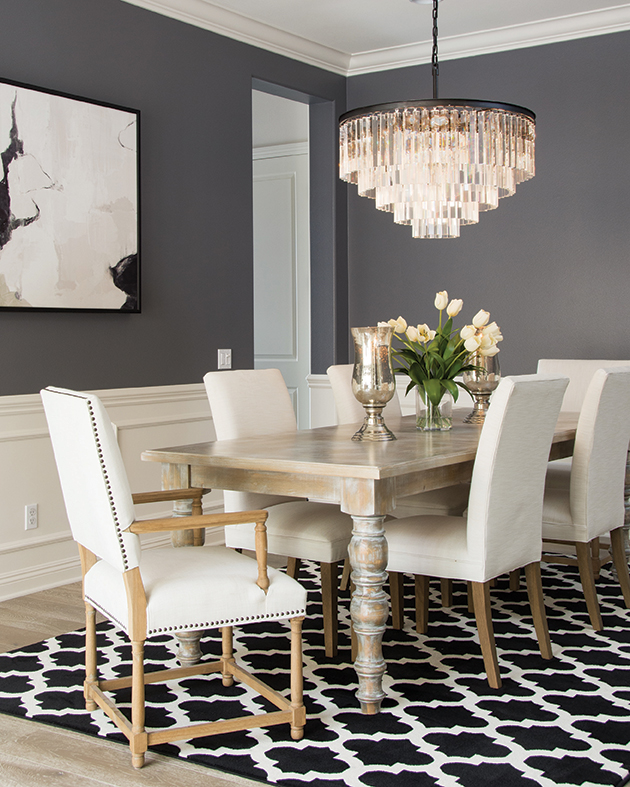 “I wanted a fountain that was beautiful, but also that my kids could play in with abandon,” Bridy says. On a recent day, she and Kurt entertained five families, each with three children. As parents chatted over drinks, the kids splashed in the fountain and frolicked in the sandbox. In working with Kurt and Bridy to design an indoor/outdoor space that was both beautiful for entertaining and functional for them, Brittney saw a great opportunity to experiment. “Bridy would say, ‘Just do it. You decide. Whatever you think.’ It allowed me to push some limits and get creative,” she says.