Copying Results in an Original

With help from other hands, a Del Mar gardener follows a concerted path to an evolutionary landscape

Transplant a New Jersey native to Del Mar and what does she grow first?  “Citrus and other fruit trees. We had nothing like that,” says Sue Halenza, recalling her arrival here almost four decades ago.
Today, two mature orange trees flourish in the front yard of the oceanview estate Sue and her husband, Judd, have called home since 1978. Along the south side of their historical 1927 Spanish Mission home, plum, fig, pomegranate and apple trees thrive. So does a clambering vine, whose table grapes Sue reluctantly shares with hungry birds. The orchard complements the eclectic Mediterranean garden Sue crafted over the years with help from her long-time gardener, Lino Guiterrez, and some of the area’s top plantsmen and designers. Garden rooms encompass classic flowers, gourmet edibles, select rarities and a growing number of succulents to make the landscape increasingly water-wise. More than a third of the lawn is artificial turf, a prescient change that Sue and Judd made some 15 years ago. The couple’s travels, plus Sue’s longstanding member-ship in the Del Mar Garden Club and passion for cooking (she once tested recipes for Van de Kamp’s) inspire the garden’s ongoing evolution. 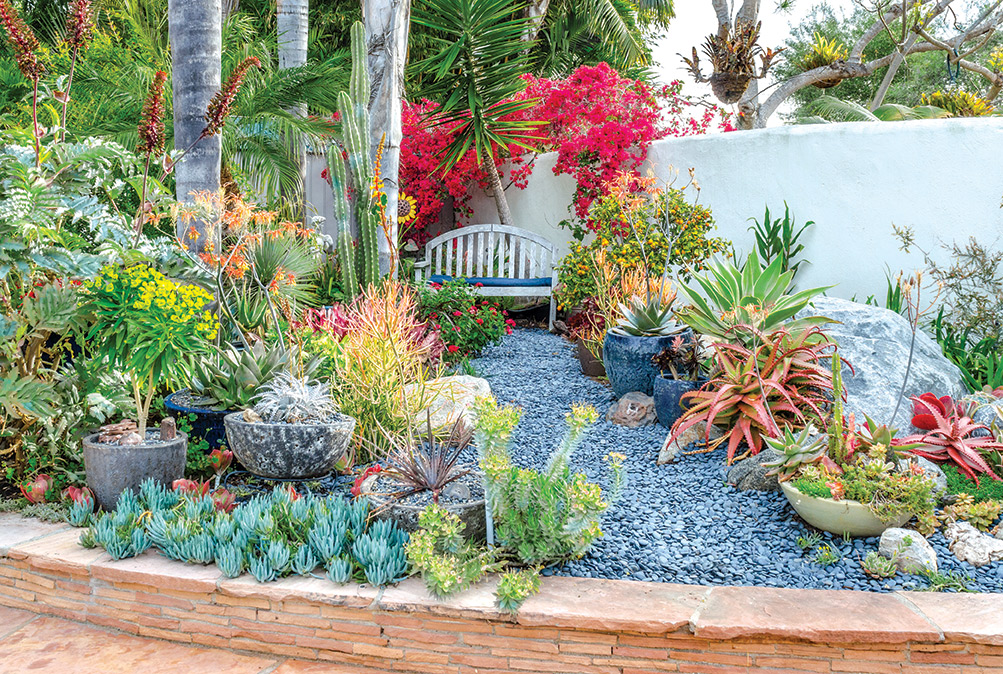 “I wasn’t born creative, but I’m a good copier,” she says. When Sue and Judd moved in, the house and yard were “a mess,” she notes — a decline brought on when its rock-star owner ran out of money. Purchase of an adjacent property expanded their narrow lot, but major home renovations were postponed while the couple raised three children. Landscaping, however, began immediately, with two new gardens at the property’s east and west edges. Landscape designer Tom Piergrossi, former owner of an acclaimed Vista nursery, was tapped to create a carefree, streetside garden. “I told him I didn’t want to worry about it ever,” Sue says of the mix of succulents, bromeliads and flowering shrubs now bathed in the dappled shade of a jacaranda tree — a Mother’s Day gift from Judd. 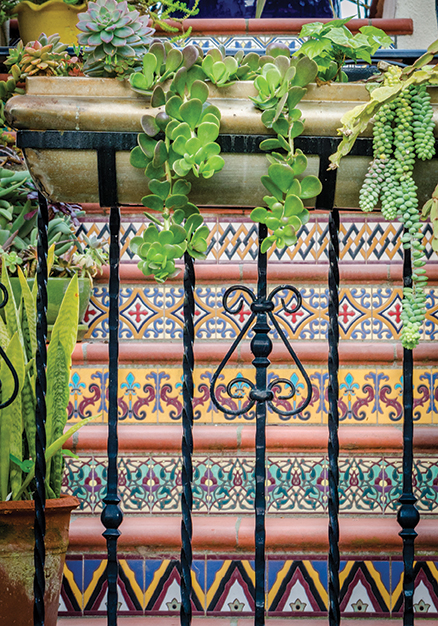 Childhood memories sparked the second addition: a rectangular rose garden that underscores a view to the horizon. Tall urns overflowing with sunset-pink begonias herald dozens of hybrid teas, floribundas and grandifloras, including favorites ‘Julia Child’ and ‘Marilyn Monroe,’ as well as ‘Altissimo,’ a crimson climber that first caught Sue’s eye at The Huntington Botanical Gardens.Running between these gardens on the north property line is a long, low wall dressed with a trompe l’oeil painting by Russell Varney. Its fanciful garden scenes, populated by birds, pet cats and cheetahs glimpsed on an African safari, eventually will blend with an adjacent flowery border that landscape designer Dave Ericson expanded earlier this year. Across a swath of grass, where the couple hosts bocce ball, croquet and other games when they entertain, lies a wide, pink flagstone patio that abuts the home’s kitchen and living room. Hanging baskets and foundation plantings here burst with shade-friendly fuchsias, flowering maples, azaleas, ferns and two of Sue’s favorites: speckled pink and cream Hawaiian snow-bush and bold ‘Encanto Orange’ begonia. 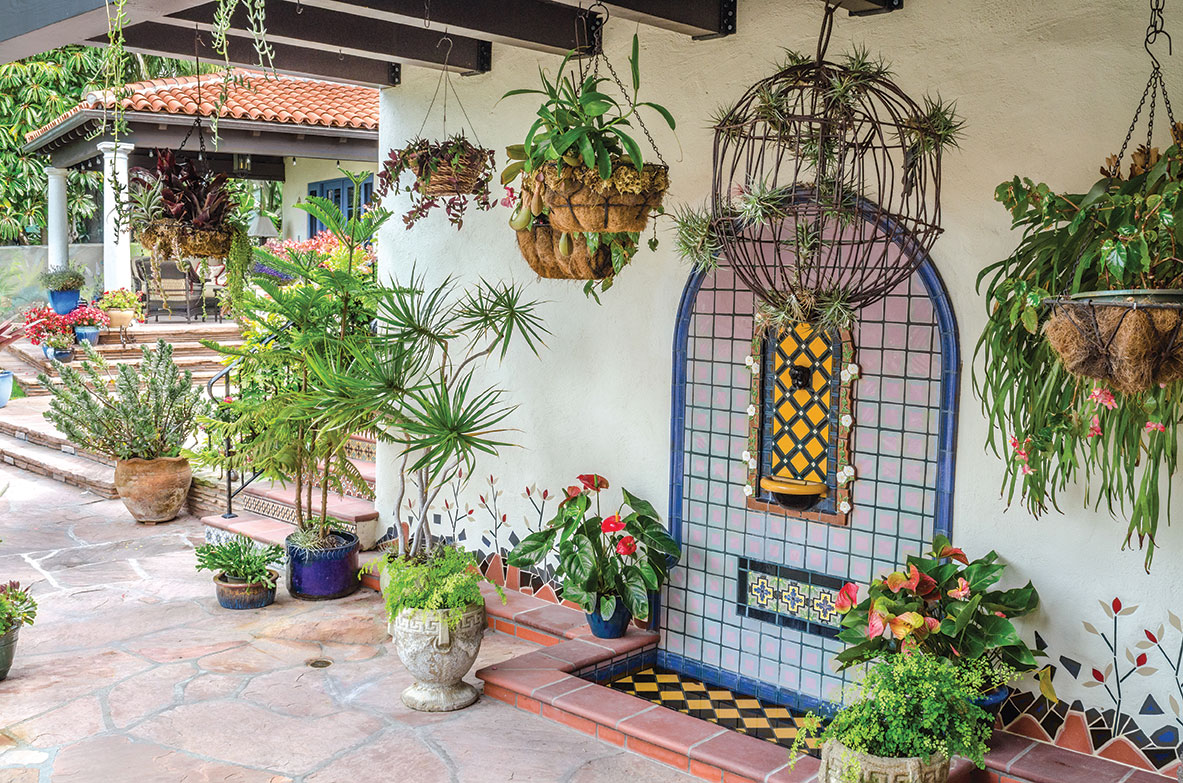 During extensive construction that included a new guest cottage about eight years ago, Sue and Judd added one of their estate’s most striking amenities. Long on Judd’s wish list, a new pool was built and crowned with an elegant Malibu tile mural of cobalt blue peacocks beneath a swirl of colorful flowers and foliage.  “It’s a classic design and echoes a wall fountain and tile inserts all original to the house,” says Sue, who visited the tile company’s Los Angeles factory to select motifs and colors. With years of garden experience behind her, Sue still faces challenges, particularly outside the home’s entry that is hit hard by afternoon sun. Sculpted cypress, geraniums (including one with large, lemon-scented leaves) and purple agapanthus have proved unfazed by the heat. So have two pink mophead hydrangeas nestled next to the front steps. 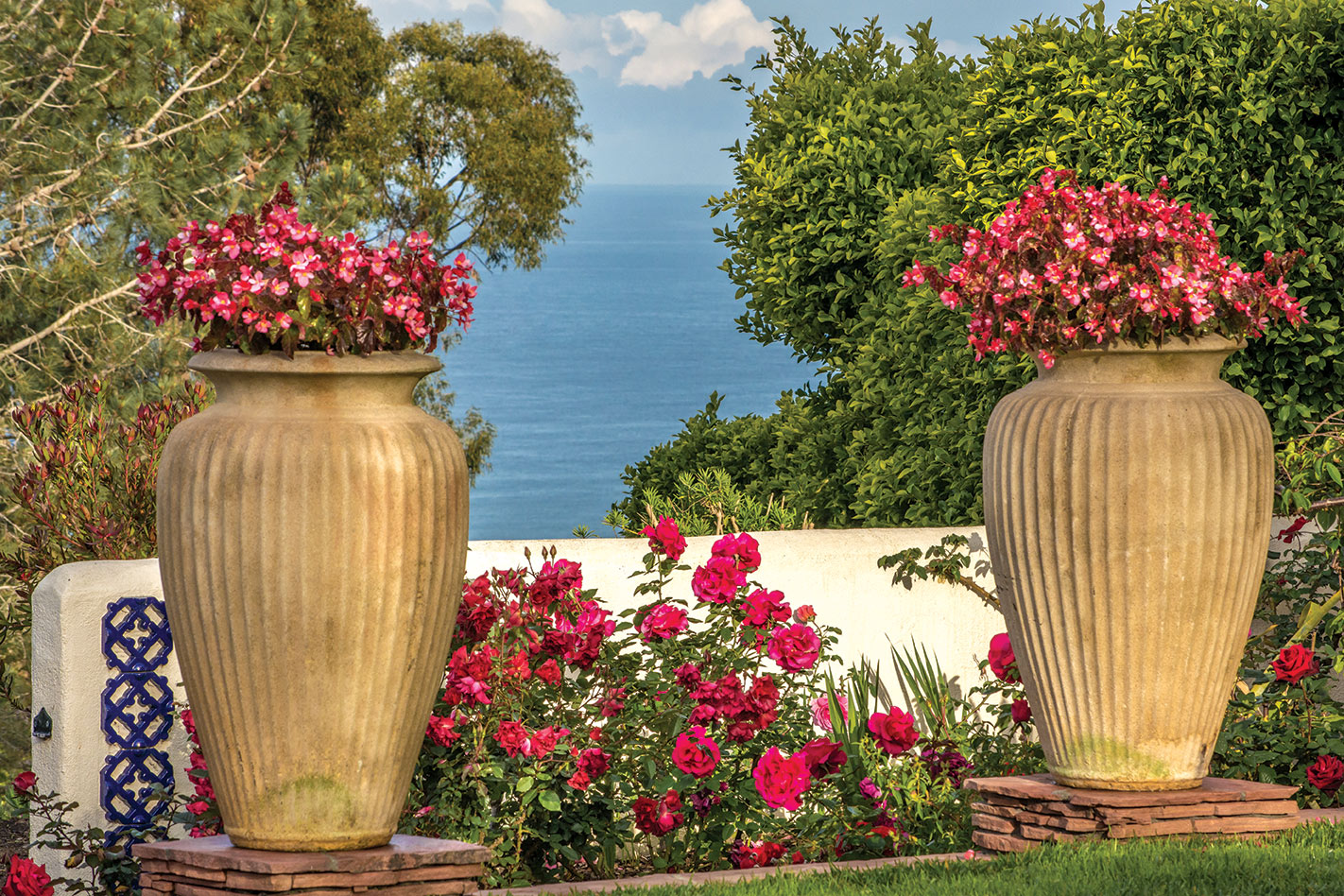 “Both were growing here when we bought the house,” says Sue, who fondly recalls the blowsy flowers from childhood stays on Long Island. Another problem area, Sue’s “plant hospital” next to the cottage, needed a quick refresh before the landscape’s debut earlier this year on the San Diego Horticultural Society’s annual garden tour.“Three friends from the garden club — Linda Teague, Mary Friestadt  and Dwyn Robbie — came to my rescue,” she says, pointing to new succulent plantings traversed by a Mexican beach pebble path to a view bench. “Tour-goers loved it — and the pool,” Sue says. “They snapped pictures of both.”