Outside-the-box passion is evident on Adam Hiner’s acroyoga-intensive Instagram account. At first glance, it looks like reckless experimenta-tion as bodies fly through the air. On further examination, though, the tricks are rooted in thoughtful, meticulous practice. Rolling out a line of high-alcohol kom-bucha, which Adam has done with two friends, can be seen as a similar process. “High alcohol” and “kombucha” might seem an odd pairing in most places, but not San Diego. Boochcraft marries the city’s vibrant craft beer scene and health-focused lifestyles. Even the term “high alcohol” is relative: The brews reach an alcohol content of about 7 percent, which is on par with many of the most popular craft beers. For about a decade, Adam has been serious about kombucha, a fermented tea that usually has less than 1 percent alcohol. “I was drinking it all the time,” he says, and figured, “I might as well make it.” At his now-shuttered Hillcrest restaurant, Local Habit, the house-brewed kombucha on draft was a hit.
Adam started discussing broader com-mercial production with Andrew Clark (his brother-in-law) and Todd Kent; the trio formed a corporation in 2014. After the restaurant closed in 2015, “We were off to the races,” Adam says. They built a brewery in a Chula Vista warehouse, then launched in March with six flavors available in 22-ounce bottles and 5-gallon kegs for bars
and restaurants. Boochcraft starts the same as traditional kombucha: Black tea is brewed, then the brewmaster (in this case, Andrew) adds organic cane sugar and a starter culture that contains yeast and bacteria. This first fermentation takes place in open-air fermenting tanks 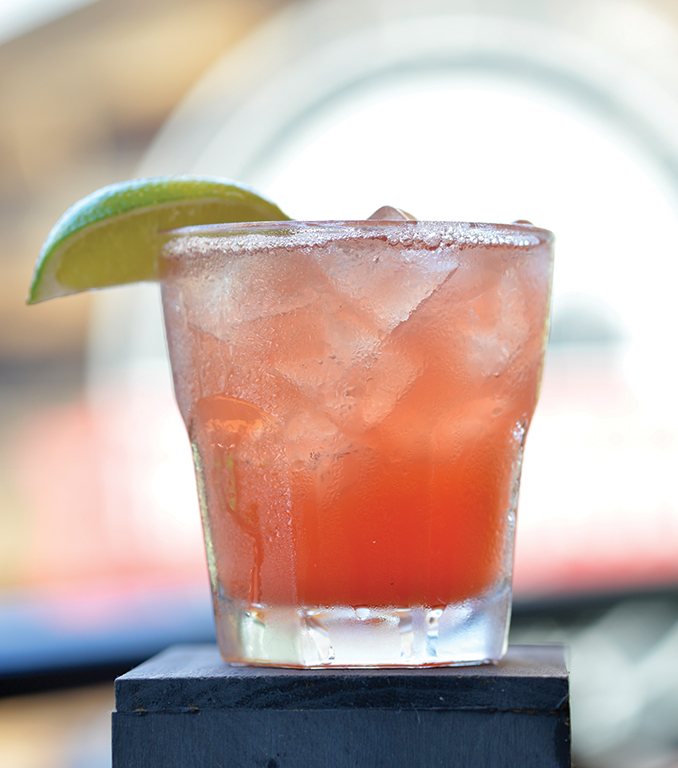 because bacteria need oxygen to grow. Next up is the “cold-crash” filtration. “It cools the tea rapidly and settles out the yeast and other sediment, leaving the good stuff [such as flavor and probiotic bacteria],” Adam says. Though there is little evidence kombucha promotes health, the medical establishment recognizes the benefits of bacteria colonies to the digestive system. The second fermentation yields a higher alcohol content. A yeast more often seen with wine production is added to the kom-bucha in 40-gallon, closed fermenters. It takes about a week for the yeast to con-sume the sugar, getting the alcohol up to the optimal level. The beverage is again filtered, then picks up more flavor as it passes through a keg filled with herbs, Adam says. Cold-press juices go into the final tank with the infused kombucha. It’s carbonated for consistency, then pushed into bottles and kegs. As the team considered various concoc-tions, harmony was paramount. “There’s always a health benefit and flavor component that are meant to be balanced,” Adam says. T urmeric lends a bright color to the bottling with tangerine and ginger, but won a spot in the lineup because of its anti-inflammatory properties. As far as promotions go, once the mer-cury starts to drop, the summery, thirst-quenching watermelon-mint-chile version will take a backseat to the apple-lime-jasmine blend. Many kombuchas match the “vinegar soda” description, but the Boochcraft team has worked hard to be different. After experimenting with various yeasts, “We steered our kombucha flavor to not have acetic acid,” Adam says. They settled on a yeast that yields lactic acid to impart a sour but fresh flavor. The beverage is filtered to keep it crisp and visually appealing. The watermelon-mint-chile blend would be perfect with spicy foods, each compo-nent hitting the imbiber separately. Melon aromas make way for mint in the mouth, then just enough chile tingles the throat.
There’s no sediment, as there is with many commercial kombuchas. The carbona-tion is surprisingly fine; the bubbles are almost imperceptible. It’s lighter in weight than many beers — certainly those at the same alcohol level. The lasting impression is simply tangy refreshment. Lighter-style cocktails, incorporating beer or sparkling wine, have been trending this year on bar menus. It’s easy to imagine Boochcraft flavors mixed into classics. Adam offers up a Moscow Mule with the ginger-lime-rose hip blend standing in for the traditional ginger beer and lime or a twist on the Greyhound, replacing grapefruit juice with Boochcraft’s grapefruit-hibiscus-heather bottling.
It’s no accident that Boochcraft had re-markable reach across Southern California within months of its debut. A partnership with Stone Distributing Co. (an arm of the Escondido brewing powerhouse) aided Boochcraft’s entry into restaurants, bars and stores, including Whole Foods.
“Stone feels more like a partner in pro-moting our product and not just an order-taker,” Adam says. Key to Boochcraft’s mission is simply getting people to taste the brews. The company has a booth most Sundays at the Hillcrest Farmers Market and frequent tastings at Bottlecraft and Whole Foods stores, in addition to smaller shops and bars. (Find the most up-to-date events on Boochcraft’s Facebook and Instagram pages.) “We had an idea of a target customer, but that always changes,” Adam says, noting that a “little old lady” has become a regular at the farmers market booth.
“It’s exciting that it’s being received well by people that we didn’t expect.”