After renting a house in Ocean Beach for a few years, Saylor Wright bought a house there in 1998 (“six months into a climb in the market,” she notes). “This little house had every-thing I wanted,” she says while sitting on a teal sofa in her living room. “It is on a hill, and I’d wanted a view. I liked that it was small, because someday I would ‘knock it out,’ and I thought it would be less expensive to create my dream house if it wasn’t big. I also liked the location. I am in the sweet spot: close enough to walk to town, but far enough to get away from the crowd.” Content for a while with her 1947-built stucco cottage topped by a shingled mansard roof, the owner of Hey Saylor salon in Bankers Hill eventually decided the house needed work when she was planning a trip to visit her sister in Hawaii for a few months. “The catalyst was a friend who rents out their house for three or four months,” Saylor says. “I thought, ‘Maybe I should rent my house out.’ But then I thought, ‘[As a renter], I would not want to stay here.’” The architect who came to look at the two-bedroom/one-bath house declined the project of 832 square feet. 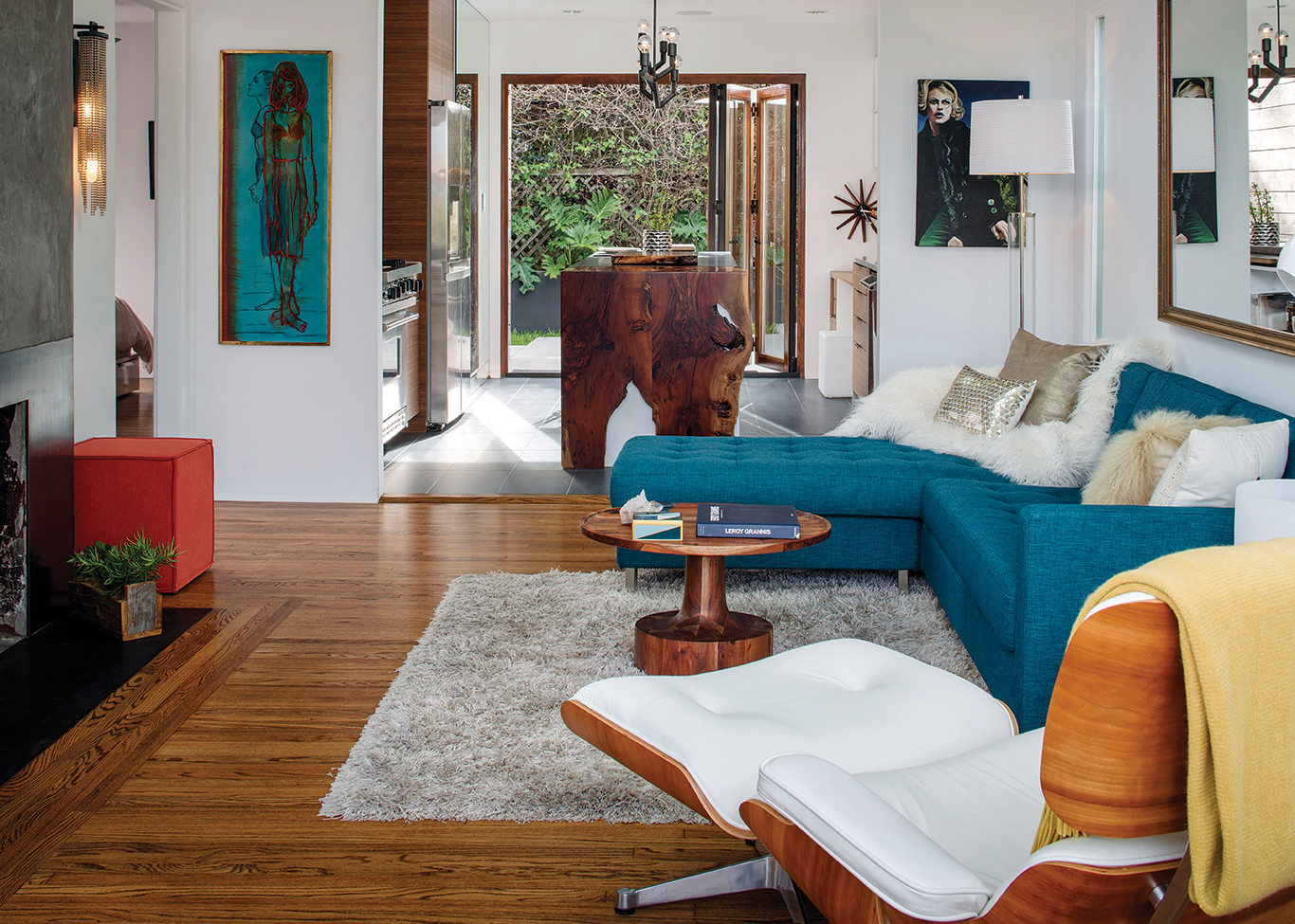 “A lot of architects won’t do a job on this small of a scale,” Saylor says. “So I called him back and asked, ‘Do you know anybody who would be willing to do it?’” He gave her Jimmy Sullivan’s number.“When Jimmy came out, I said, ‘I just want really good lines, contemporary and simple, but you can be as creative as you like within my budget. … It’s a thrill, because Jimmy elevated my environment beyond what I would have pictured for myself. He gave me space to expand into. I think I do that for my clients as a hairdresser. I see their potential and spirit and push them out of their comfort zone. Their confidence moves into that. I feel like Jimmy has done that for me.” “The first thing I noticed was how dark it was,” Jimmy says.
“That was Saylor and [her partner] Toepfer’s chief complaint about the house — that it felt dark and cold.” Saylor and Toepfer affirm that it was literally cold and say the remodel allowed them to add insulation. “It’s super warm now,” says Toepfer, a massage therapist. “My first approach was to get natural light into the spaces,” Jimmy says. He added skylights, replaced the solid front door with a framed-glass one, opened the back of the kitchen for the installation of La Cantina doors, and removed a wall separating the living room and kitchen so that the northwest side of the house is open from front to back, with windows and doors providing light and cross-breezes. 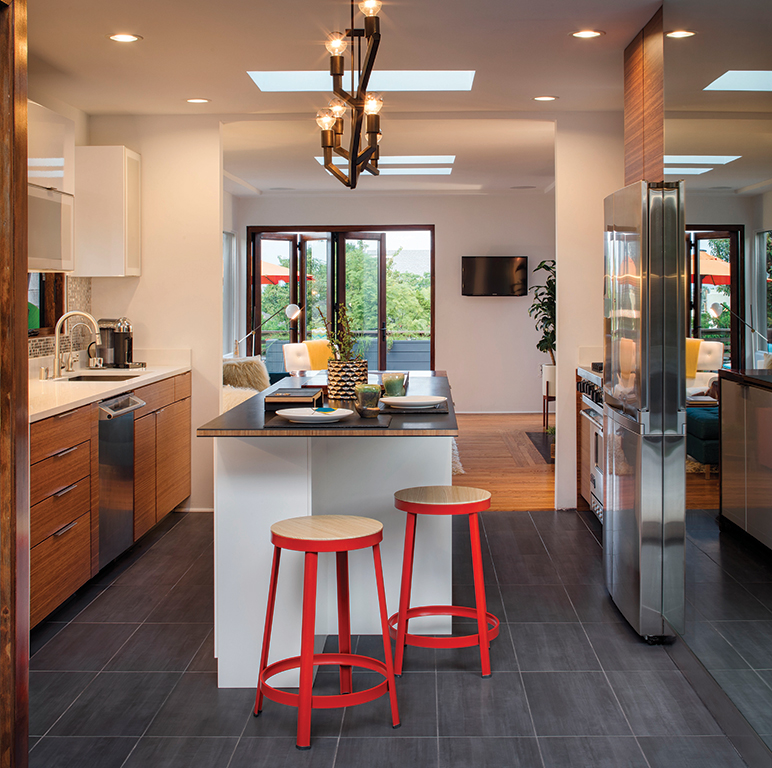 The nondescript living room fireplace had blended with the living room wall (though it jutted out), had a brick-colored stone hearth and white mantel, and was flanked by arched niches with shelves. The con-temporary, mantel-free replacement features a steel hearth and flush-with-the-wall façade. On the left is shelving made of bamboo plywood (Plyboo) that Jimmy favors for being a sustainable product and because its cut edges possess a natural cross-grain that eliminates the need for an adhesive trim.
Jimmy used Plyboo in other rooms as well, including for lower kitchen cabinetry. To top the island that replaced a smaller, butcher-block piece of furniture, he used black Richlite, a composite made with bamboo between layers of recycled paper. The end of the island facing the living room showcases a conversation-piece overlay of a live-edge pepper tree slab from a tree that once grew in Point Loma. Jimmy collaborated with local lighting designer Anna Hamann on other statement-making design elements: an iron chandelier hanging over the island and a sconce on the wall to the right of the living room fireplace. For contrast in the kitchen, Jimmy chose white quartz for countertops, glossy white lacquer for upper cabinets (some with frosted-glass doors) and a half-inch-square mirrored mosaic tile backsplash on the sink-side wall for what he calls “a little bling.” A vinyl wallcovering with a black-and-white image of the south side of the Ocean Beach pier — by Temecula-based photographer Bodhi Smith — makes an impactful backdrop for the wall behind the new Viking range. 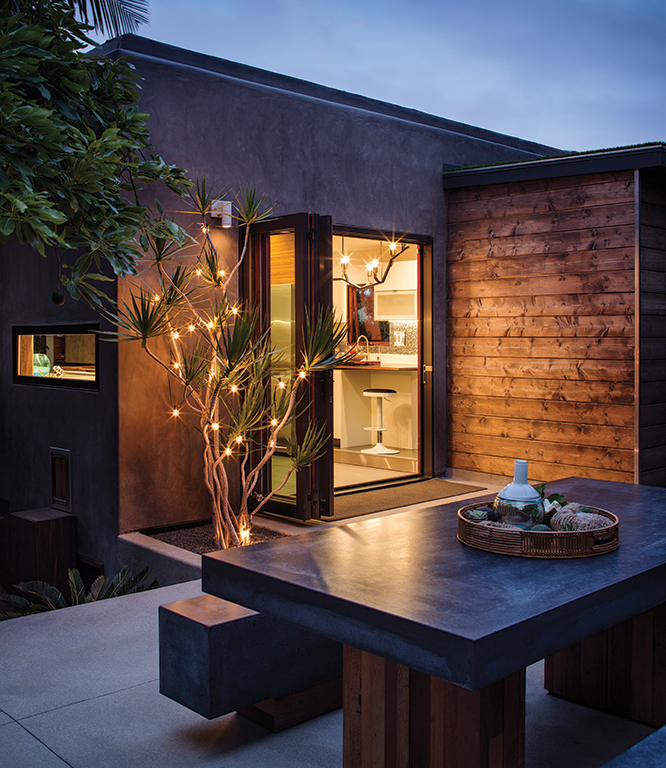 At the back end of the kitchen, Jimmy covered one wall from floor to ceiling with a solid sheet of mirror to bounce in light and visually expand the space. On the opposite wall,
a built-in desk took precedence over the former corner-bench eating nook. The previous white-painted and pine checkerboard floor had no place in a contemporary setting; the new, dark gray por-celain tile does. (Oak flooring in the rest of the house simply got stained darker than its former gold finish.) To bring light to the master bedroom and hallway bathroom, Jimmy knocked out most of the wall between them, replacing the bottom half with Plyboo cabinetry that serves as deep storage on the bathroom side and forms a headboard that incorporates floating nightstands on the bedroom side.
The upper portion of the wall comprises a 3form panel with dried pine needles embedded in resin, which transmits light from each room into the other. “It was the most claustro-phobic, hideous bathroom with no redeeming feature,” Saylor asserts. Now it has a simple, white aura with a penny-round ceramic shower floor, round ceramic vessel sink and a Plyboo door that runs floor to ceiling. “The door height creates volume, giving the illusion that the ceiling is higher,” Jimmy says.
On the exterior, he gave the house a more contemporary vibe with smooth-finish stucco and by replacing the shingled, mansard roof with a flat one. 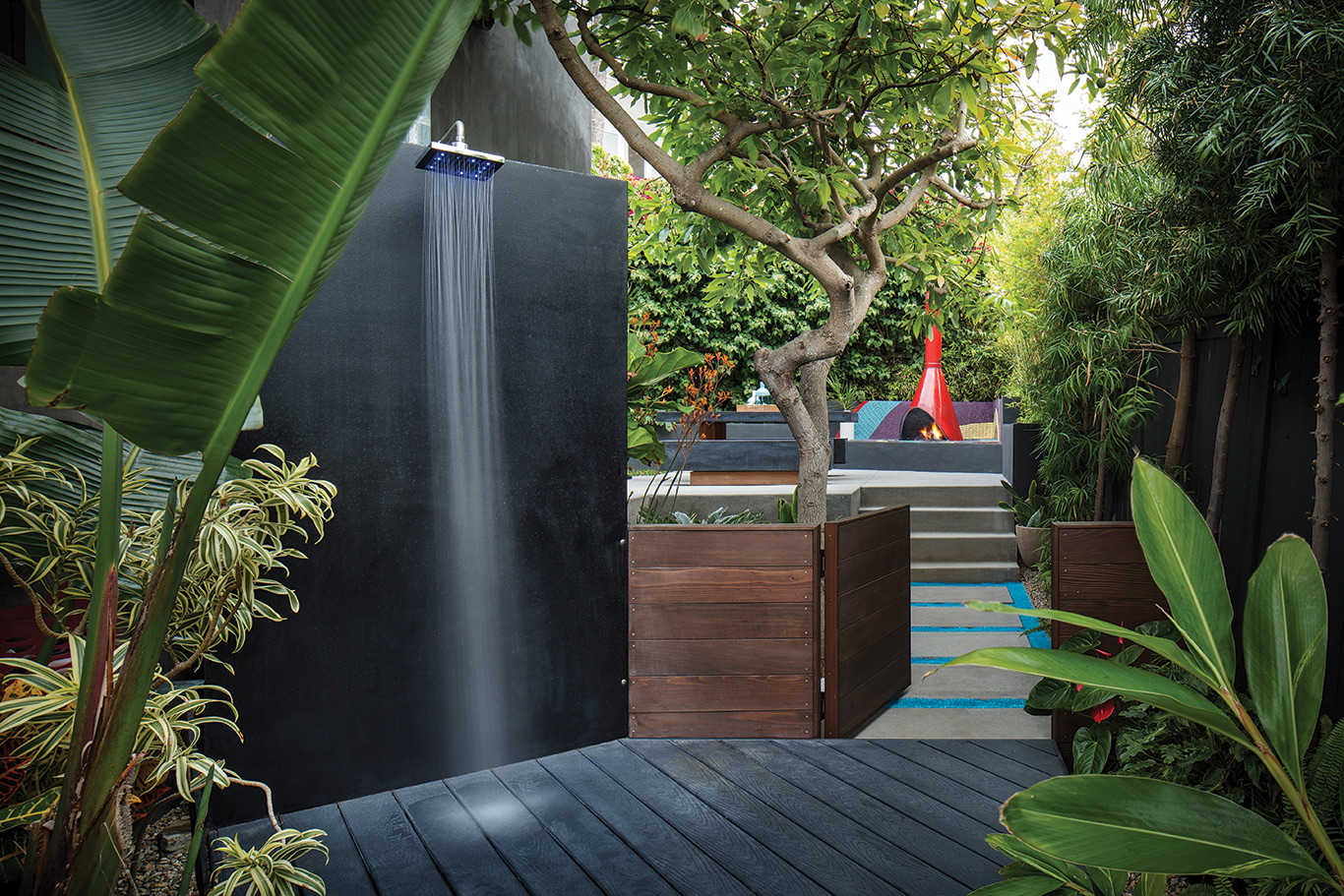 The second phase of the remodel transformed outdoor spaces. The back yard includes a polished concrete and teak dining table and benches. Steps down from the deck is a mature avocado tree surrounded by blue synthetic turf. “Saylor wanted something cute for their two Chihuahuas,” Jimmy explains. “They need to have a little space of their own.” A custom ramp gives the dogs access to a pet door, hidden inside below the kitchen desk. One side yard includes an outdoor shower and hot tub amid lush and floral greenery. 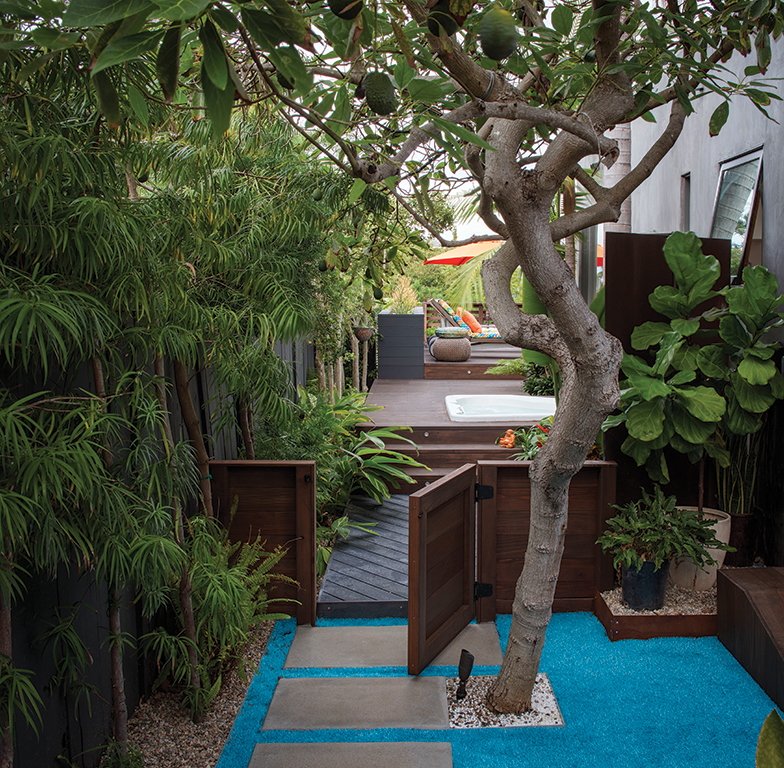 “Because it’s a small space, I felt that I could get away with having some tropical plants,” Saylor says. In the other side yard, she laid out an I Ching message with concrete parking bumpers in a bed of pebbles. In front of this sits a one-room structure with cork flooring that Toepfer uses for massage therapy. Jimmy also reconfigured the front deck. The lower section is closer to the street, but the built-in bench seating and a tabletop ethanol fireplace offer a cozy retreat with high surrounding walls. “This is a breakfast or cock-tail area,” Saylor says. “And this,” Toepfer adds from the upper deck, “becomes the dance floor. We realized that after we had a party and everybody was dancing.”
A concrete and teak table is on the way for the “cocktail” deck, the driveway and front steps will be redone, and the red stovepipe fireplace in the back yard will be updated. The latter project may be as simple as painting it. “It’s got sentimental value,” Saylor says. “It was at my parents’ house in the ’60s.”End-of-project details haven’t kept her from inviting people over to admire the small but distinctive abode. “For the last year I have been telling people, ‘I live in a magazine house. Come over and see the magazine house.’”