Hooch, corn liquor, white dog, white lightning or good old-fashioned moonshine. By whatever name this fiery, Prohibition-era libation is called, it has a reputation that precedes itself — from Roaring Twenties gangster glamour to Appalachian stills and, as some have lamented, legendary hangovers.
People can explore the wild side of moonshine at the spirit’s namesake venues, Moonshine Flats in downtown San Diego, and the recently opened Moonshine Beach in Pacific Beach. At both, the alcohol is served in fruit-flavored cocktails that pack a wallop or poured straight while the customer is spun around in a “shot chair.”

While moonshine lives up to its rowdy repute at these popular country music venues, there is more to this clear spirit. Local craft distilleries such as Ballast Point Brewing & Spirits and Kill Devil Spirit Co., along with a handful of schooled mixolo-gists, are working to preserve the quality and integrity they say lie beneath the fruity veneer of moonshine’s revival.

“Unfortunately it gets pigeonholed as a novelty spirit,” Aero Club Bar Manager Chad Berkey says, noting that the spirit is often mass marketed in tin cans or maraschino cherry-filled Mason jars. “It’s incredibly cheap to produce. You can put it in a fancy jar really quick and put it on the market; but there’s also a way to do it right, with quality ingredients.”

Also referred to as white whiskey or fresh whiskey, moonshine typically is made from corn, but can be produced from another grain or fruit.
Alexandra Sklansky, a spokesperson for the Distilled Spirits Council of the United States, says that moonshine’s resurgence follows the increase in craft distilleries over the past decade.

“It can cost several million dollars to build and establish your own distillery, and many distillers want to get a product to market as quickly as they possibly can,” she says. “The obvious solution is to release an unaged, white whiskey.”
Aero Club, a predominantly whiskey-centric bar, offers a dozen moonshines.

“Some of those fresh whiskeys are outstanding,” Chad says. “It’s really good to experience the smells and flavors of that raw product. The serious whiskey drinker loves that.”

At Ballast Point’s Scripps Ranch distillery, the public can savor the tropical fruit aroma and mild corn sweetness of Devil’s Share Moonshine in a 1920s-themed speakeasy.

“Just coming off the still, our bourbon had a really nice flavor and aroma, and we wanted to showcase that in its own spirit,” Distillery Manager Derek Kermode says, noting that Ballast Point’s unaged bourbon is registered as a corn whiskey and can be served neat or in classic cocktails.
“You can make a white whiskey sour with it,” he says. “It’s almost like a decon-structed whiskey drink.” Doug Keeling, who pours samples in Ballast Point’s speakeasy, says many guests arrive with preconceptions rooted in lore.
“Their first thought is ‘Ooh, it’s white lightning! It’s going to cause blindness!’”
he says with a laugh.  Though moonshine tends to have a higher alcohol content than aged whiskeys, Doug says most customers are pleasantly surprised by Ballast Point’s gold medal-winning product. Devil’s Share has earned more than a dozen awards since its release.

“I basically educate them,” Doug says. “After getting over the initial ‘That’s pretty high proof,’ they’re amazed by the unique flavor profile. They say, ‘Wow, this is actually drinkable.’”

“Any unaged spirit is a little aggressive, but Ballast Point’s is pretty smooth and approachable,” he says. As a child, Kill Devil owner and distiller Ray Digilio watched his grandmother make homemade grappa. He now has his Ugly California Moonshine in more than 200 retail outlets, including Whole Foods (which also carries Devil’s Share Moonshine). Kill Devil added “ugly” to the name because consumers found its initial run too potent. (Ray has since lowered the alcohol content.) 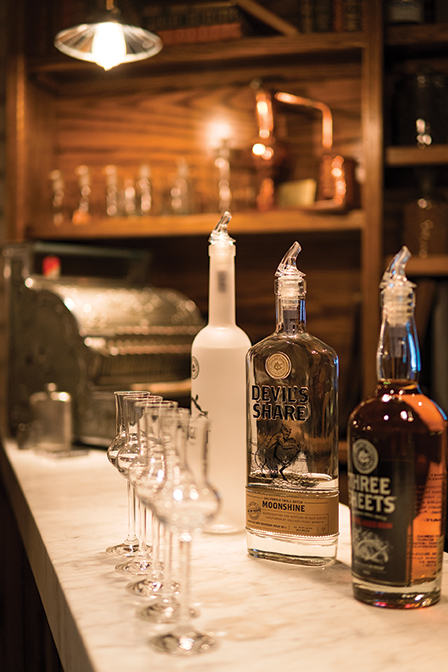 “When we were going to festivals, people were very hesitant to even try it,” he says. Ugly California is made primarily from Vienna malt (kiln-dried barley malt also used in producing pale ales) — a process akin to making a single-malt Scotch.  “It’s toasty and malty on the nose,” Ray says. “When you drink it, it’s kind of caramelly and soft.” The Lion’s Share restaurant in down-town San Diego serves a drink called Ray’s Sleepytime Tent — a respectful nod to the tent Ray resided in during the two years he worked to build his business. Bartender Brandon Curry says he can make “just about anything with Ugly California Moonshine.”

That versatility has led to a collaboration between Kill Devil and Normal Heights-based Dark Horse Coffee Roasters, whose beans give Ugly California Rise & Shine hints of chile peppers and chocolate.

Though some distillers who jumped on the moonshine bandwagon several years ago now focus on more profitable, aged whiskey, Alexandra believes moonshine will be on shelves for years to come. “It can very easily take the place of vodka or a more neutral spirit in a cocktail — and I think people definitely like the story around moonshine,” she says. “It feels a bit rugged and adventurous, so I don’t think it will ever go away.”

State and federal alcohol regulatory agencies still consider the term ‘moonshine’ to mean any illegally produced and untaxed spirit. Because the government does not recognize moonshine as a legitimate spirit, those wishing to distill it must register it with the federal Alcohol and Tobacco Tax and Trade Bureau in a category such as “corn whiskey” or “distilled spirits specialty.”