Up, Up and Away

From the first floor to the rooftop, an oceanview home’s makeover transports you to another level

nafraid to turn vision into reality, interior designer Rebecca Robeson mulled over how she was going to make the entrance to a grand, Mount Soledad home appealing. Stuck with a 7 1/2-foot ceiling that appeared so low it brought the Chicken Little warning, “The sky is falling,” to mind, she needed a way to direct the eye upward, toward the magnificent spiral staircase.

“I thought it would be amazing if a light fixture could be hung from the ceiling, come down 30 feet and light up all three floors,” Rebecca says. “But nothing like that existed unless it was some sort of glitzy, Vegas-looking thing. I wanted a classic design aesthetic. There was another problem: How was I going to hang anything from the glass skylight in the staircase ceiling?” 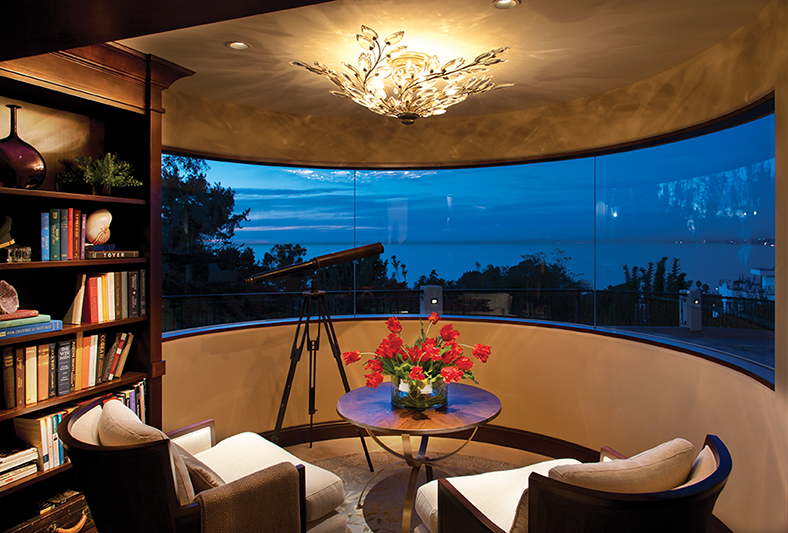 An enchanting but far-flung idea for a sculptural, art-piece light fixture began to emerge. She ordered 48 Bocci hand-blown glass balls that weighed five pounds each. Then she designed a 700-pound steel support of tree-like branches, which was welded onto the home’s main post. She determined pendant placement throughout the stairwell by using rope-tied water bottles, numbered to correspond with the balls. When the design was complete, the bottles were replaced with the Bocci lights, individually wired for electricity.

Homeowner Martin Chitwood says, “I never would have thought of the creative design changes Rebecca made. I couldn’t visualize her solutions, but I soon learned that when she made a recommendation, it was a good idea to adopt it. Her ideas turned out better than I could have imagined and added immensely to the home’s appeal.”

For example, Rebecca themed each of the three guest bedrooms differently. The entry-level sleeping quarters carry a Nantucket scheme so that East Coast guests feel right at home. On the third floor, visitor options include the Grotto Room — a cozy space decked out in brocades and velvets, with a sliding door leading out to a trickling fountain that’s part of a rock-shelter cavern — and the light-filled Sea Breeze Room, which is adorned in a coastal color combo with a sliding glass door opening to an oceanview patio. 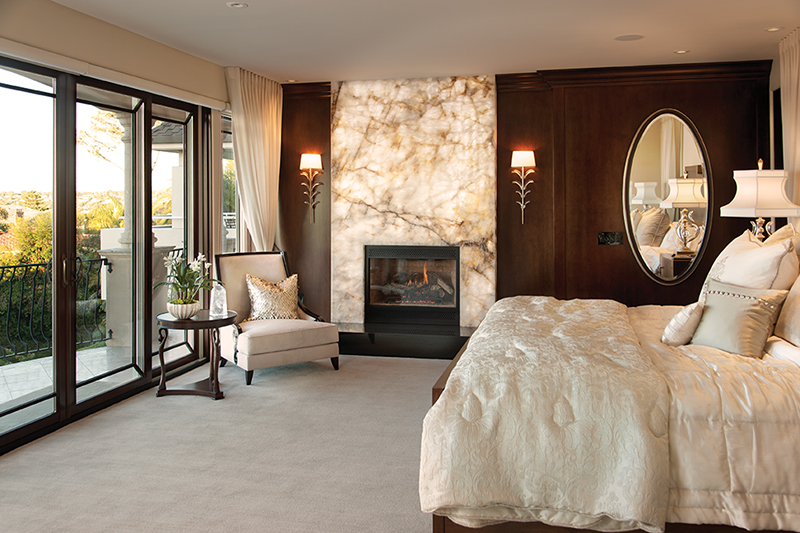 Spectacular ocean views also take precedence in the third-floor master bedroom — although a fireplace wall accented with backlit granite to show off natural veining adds another element of intrigue when the sun goes down. A trio of what Rebecca calls “bubble spaces” — one in the master bedroom, a second on the main floor and a third at the lower entry level — posed a quandary. “What the heck do you do with three oddly shaped spaces that have curved glass windows and look like fish tanks?” Rebecca questions. She conceived themes for those spaces as well. The master bedroom’s bubble became a viewing retreat with accessories like a sextant to convey a nautical essence. On the entry level, a telescope takes center stage in a study filled with books and memorabilia. On the main (second) floor, the half-circular space became a formal dining room with a round table to give diners an ocean panorama. 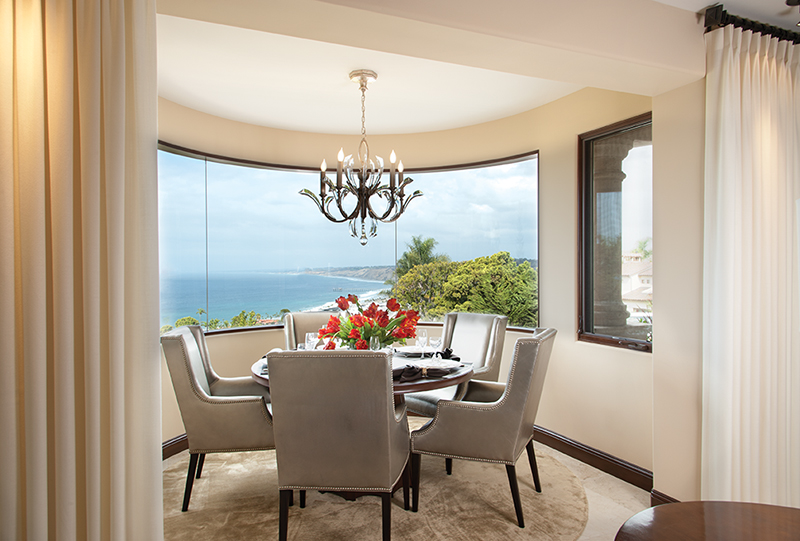 “When you go up to the second floor, the dining room bubble space lies straight ahead of you from the circular staircase,” Rebecca says. “The previous owners had put a booth in it, facing back into the main part of the house, which was open but broken up into three segments [a living room, a dining table across from the booth and a secondary seating room]. A pair of square columns, covered in knotty pine, created a ridiculous hallway to the left of the staircase that only served to make this narrow space narrower.” 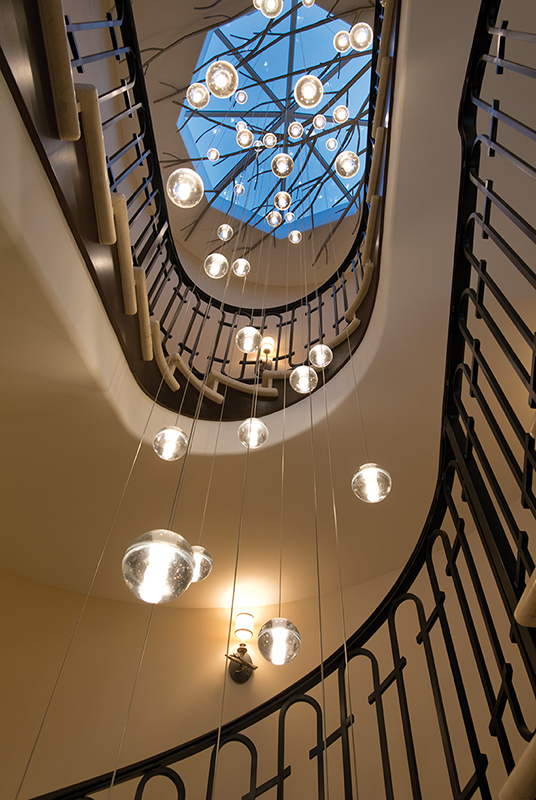 Rebecca opened the interior by getting rid of the unnecessary pillars, as well as drop-down ceiling soffits in a bar area (now a home office) behind the secondary seating arrangement and in the kitchen.

“The kitchen was unusually large compared to the other weird-shaped rooms and had more cabinets than you can imagine, all in honey maple,” Rebecca says. “In the kitchen’s center was a grand piano-shaped island that looked like it belonged to Liberace. If that wasn’t bad enough, over
the top of the thing was a drywall ceiling soffit shaped just like it.”

Now the kitchen features dark chocolate-finished cabinets; a clean-lined island with a backlit granite top that echoes the master bedroom’s fireplace granite; a five-tiered, beveled-glass chandelier; and a metallic-finished backsplash — all flavoring the cook’s space with a sophisticated air.“To give Martin flexibility, I transformed a corner space of the kitchen, which had a pew-like booth, into a cocktail area with a movable bar that fits in the elevator,” Rebecca says. 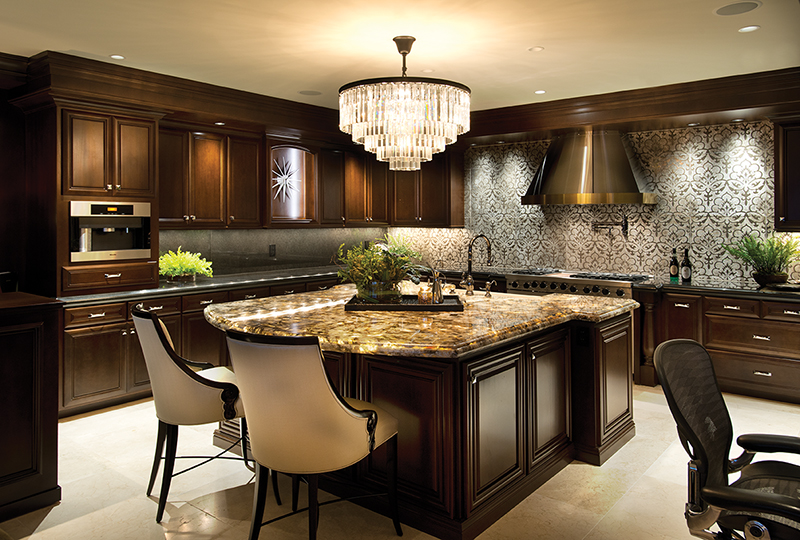 The bar can be rolled to the entry-level’s surround-sound theater, which has fabric-padded walls and a custom, walnut-paneled ceiling that Rebecca designed in a diamond pattern. At party time, the bar can ride the elevator up to the rooftop aerie — the blowout space with expansive views, several lounge areas, a vanishing-edge pool, spa, outdoor kitchen, hydraulic-lift television, four fire pits, and a bathroom with a bronze sink and hand-sculpted European faucets and showerheads. 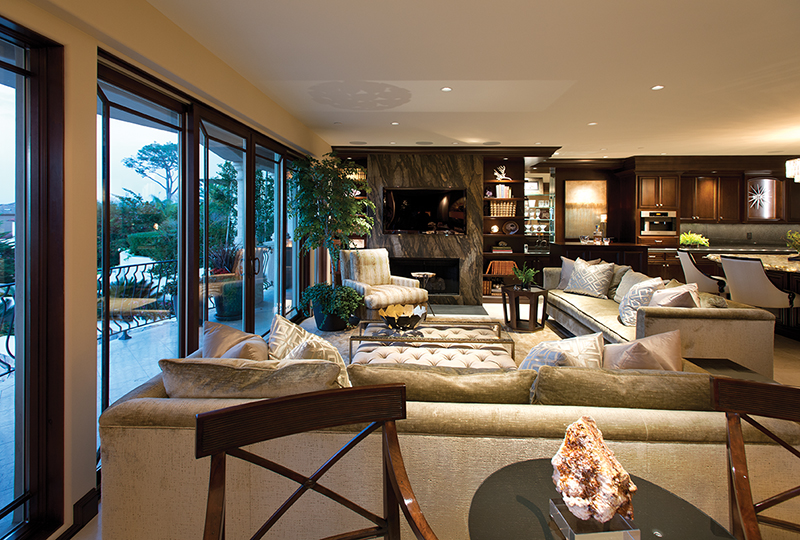 “The basic rooftop space with a pool and spa was one of the main reasons I bought the house,” Martin says. “Rebecca turned it into a five-star resort where you can sit in awe of city views, sailboat running lights in the harbor at night and lights belonging to anchored ships farther out to sea. You can see Torrey Pines and the glider port and watch hang gliders with all their beautiful colors soar over the water. “You also can look back toward the hillside to see fruit trees and the side of Mount Soledad and imagine yourself in a mountain retreat. No matter where you look, you have that peaceful feeling of communing with nature. Visitors call the rooftop area The Garden of Eden.”

“That rooftop is incredible,” Rebecca agrees. “But where I took it, it’s a whole new story.” 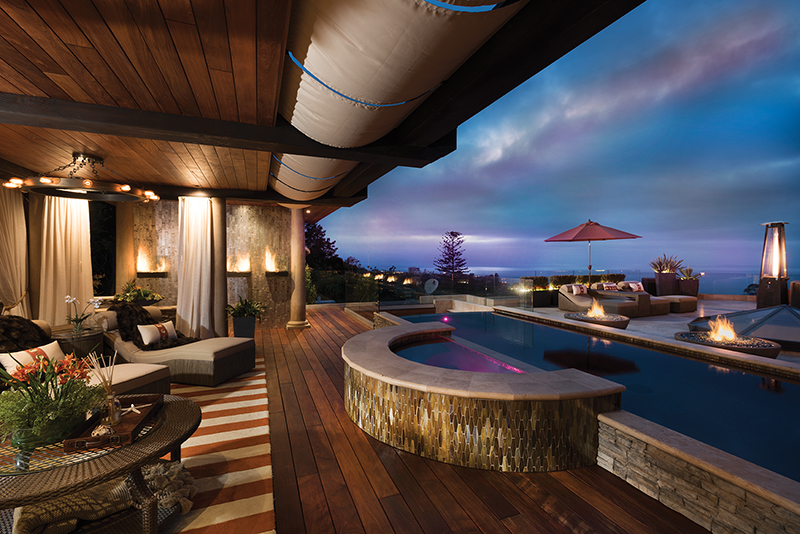