A residential redo unfolds an expanse of east-to-west views

In a kingly spot, high on a hill in the Muirlands area of La Jolla, a contemporary remodel of a previously lackluster home looks out onto the Pacific Ocean. It’s not just the panoramic outlook to the sea that awes. What’s more astound-ing is the way the residence becomes a midway meeting point for this vista and an easygoing backyard scenario.
“The homeowners talked to us about taking advantage of the views, of wanting to see the views through the house,” archi-tect Dustin Hauck says. “We removed most of the interior walls in the common space so that now the openness is one of the first things somebody notices.” 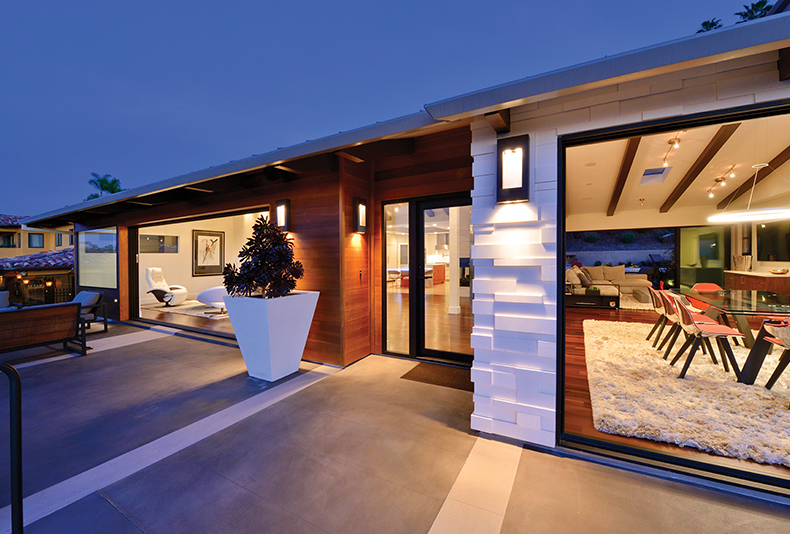 From the street, the horizontal lines of the house say “Mid-century Modern,” while offset roof planes add a contemporary twist. Western red cedar combines with smooth stucco, bringing warmth to contemporary starkness. The custom-patterned cut of limestone on an accent wall showcases creative ingenuity. The stone and its layout repeat elsewhere throughout the house. “The stepped approach to the front door is similar to the original, but that’s about where the similarity ends,” Dustin says. “The house was a mess of styles, because it had been redone so many times. If you had to define it, perhaps you could say ‘slightly ranch with an Asian feel.’ It was a mix of painted white stucco and brick with black-trimmed windows and black tile. And the front door was red. Inside there was a lot of gold, exposed wood paneling and a kitchen with redwood and black granite that didn’t go with anything.”

When you walked in through the en-trance, a thin, wood-paneled closet door greeted you. It couldn’t be opened, because it hit the floor tile. To the left, twin doors of a similar ilk closed off a wood-paneled sitting room/library. To the right, the main living area contained a family room with a tucked-away, red-brick fireplace; a dining room behind it; and, to the north of the dining room through sliding glass doors, a patio converted into a kitchen that appeared incongruously tacked onto the house. Beyond the main living area, down a hallway, lay a trio of bedrooms. 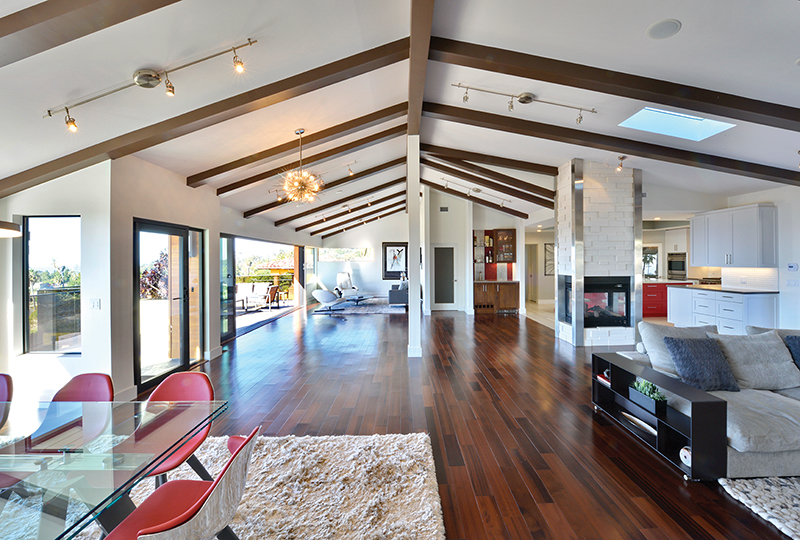 “We kept a lot of the rooms in the same location,” Dustin says. “But because we wanted to incorporate the pool and backyard feeling into the family room and give the family room direct access to the pool, we swapped the family and dining room spaces.”

The footprint may be an echo of the past, but almost everything else has moved into a capacious future. Sans walls but with vaulted ceilings, the living areas become an extravagance of glorious space. Glass folding and sliding doors at the front and rear of the house expand the indoors out. The redwood and patterned limestone live as well inside as they do on the exterior. Tidbits of red on furniture, tiling and cabinets spark liveliness within the white-walled home. 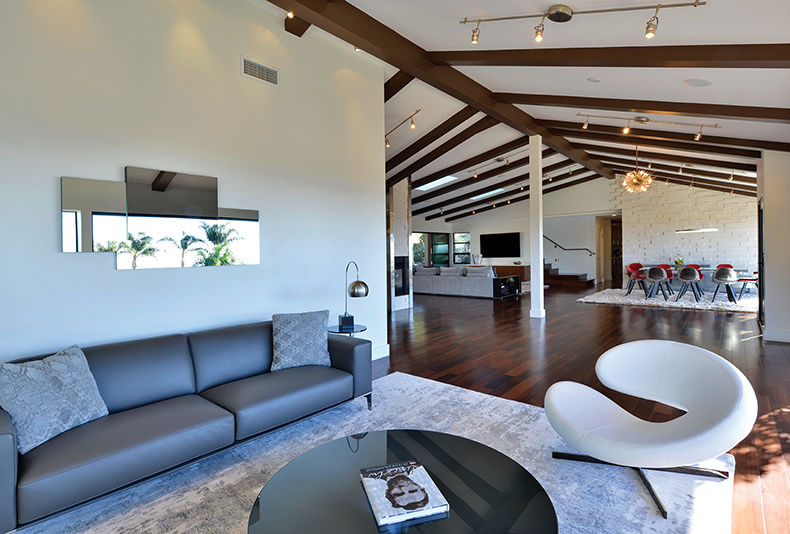 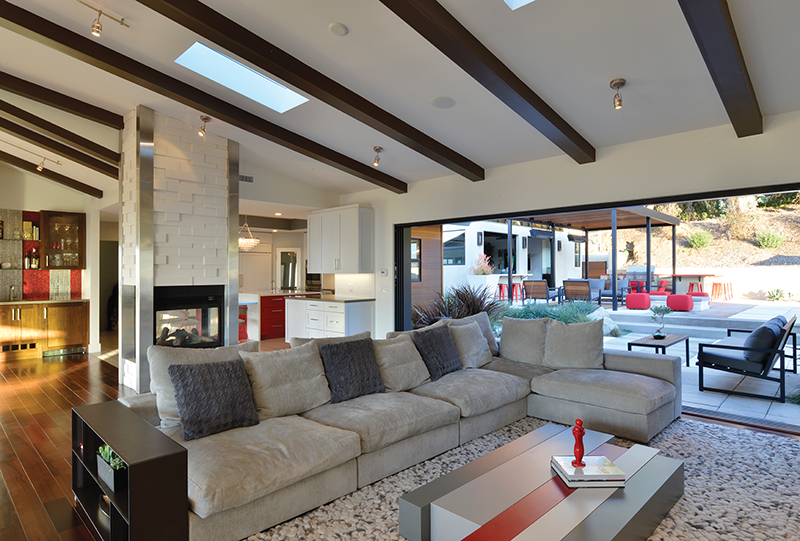 “The master suite downstairs was con-verted into two bedrooms and two bath-rooms,” Dustin says. “Now there are four bedrooms on the main floor — two in the front and two in the back. Three have their own en suite bathroom. Each bedroom has different attributes. One has aging-in-place features, such as a fully accessible, roll-in shower and a private deck that gives it a buffer to the pool area. Another, the youngest son’s favorite room, is off the bocce court and pool. The two front rooms have great ocean views and tie into a larger deck on that side.”

The steps to the stairway just beyond the family room reflect the pattern of the limestone wall in the adjacent dining room. They lead to the new second-floor master suite, which includes a seating area with a deck overlooking the rear-yard pool and another deck facing the ocean. The serene master bathroom retreat contains dual vanities, a freestanding tub and a large walk-in shower with a custom glass surround. 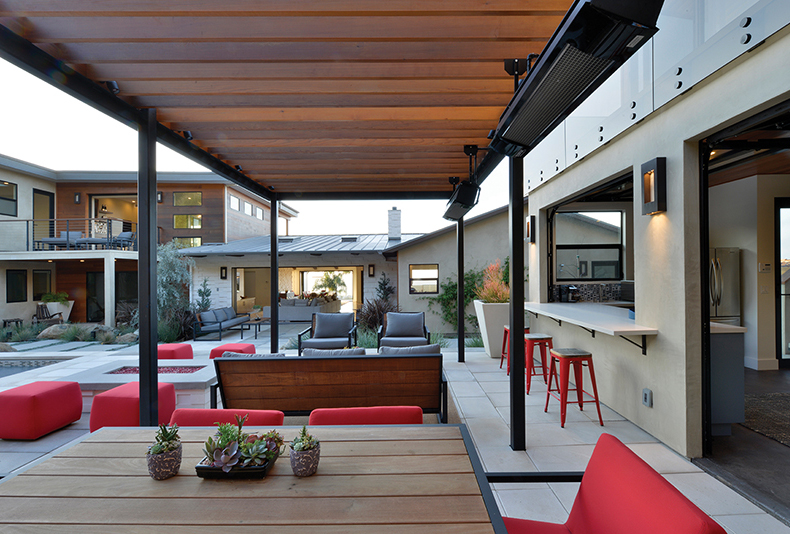 Downstairs and out to the back yard, nothing about the former space remains recognizable. A two-story pool house, out-door kitchen, lounge area, fire pit and pool/spa have taken over the spot where a tired garage, oil-stained driveway and worn grass used to reside.

“The original garage was tucked up against the house and had a small breeze-way and barbecue area. We got rid of it entirely,” Dustin says. “The homeowners wanted a place where they could entertain guests, along with a separate building where guests could stay longer than just overnight. 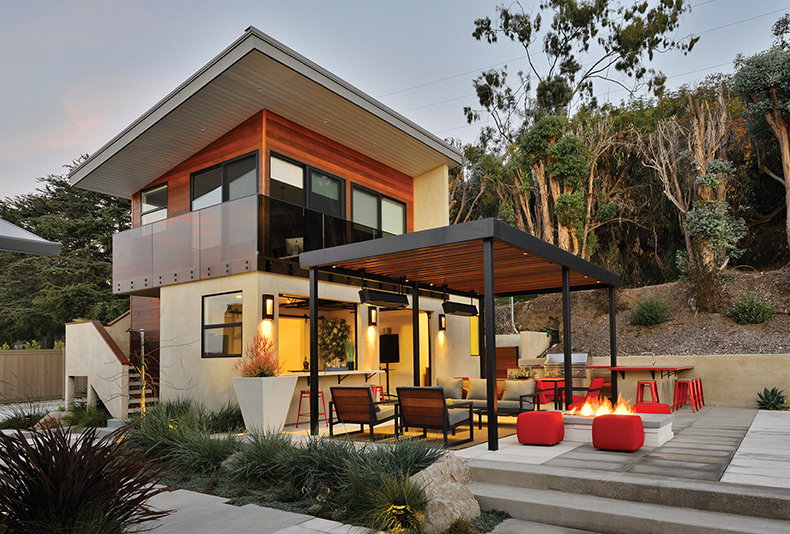 “The pool house we designed has a wet bar, a kitchen/eating area, a bedroom and bathroom downstairs — in essence, a one-bedroom, livable apartment with a bedroom that can be closed off.  “Upstairs is a private office that has pool and ocean views. An exterior staircase allows entrance without bothering anyone downstairs.” 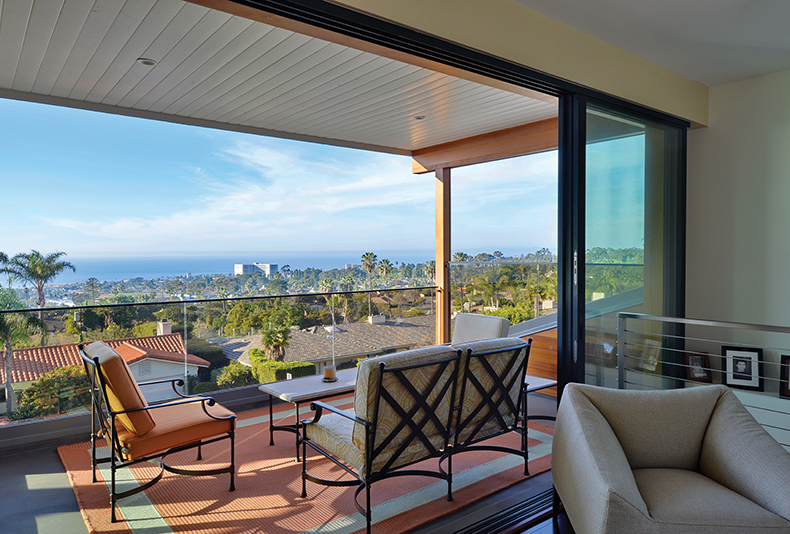