Somewhere Under The Rainbow

When Hillary and Carin Canale Theakston moved to Mission Hills in 2004, they remodeled a canyon residence that they thought would be their permanent home. “But then we had kids,”
Carin says, “and we came to the realization that you live a lot differently when you have kids.” 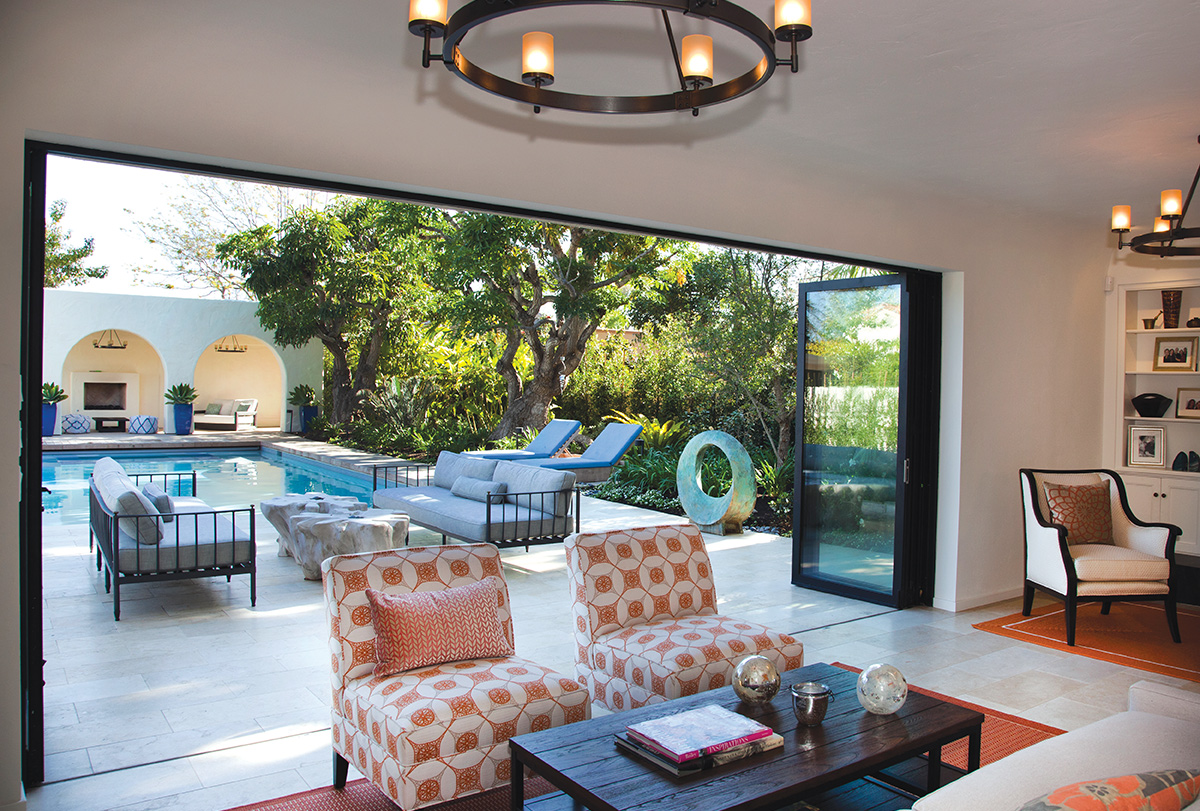 Their two daughters (now ages 6 and 3) needed a flat yard where they could kick the soccer
ball around with friends or frolic with the family dog. While the girls had their hearts set on a pool, their parents wanted an open home with easy access to interior and exterior spaces — or, as Carin put it, “We wanted to be able to see the kids without going through three or four rooms to get to them.”

Although the 1930s Spanish eclectic-style residence they bought, also in Mission Hills, didn’t allow them to check openness off their list of criteria, they fell in love with it anyway. Carin says they knew it was the right new home for them the minute they saw the grand entry with its curved, elaborate wrought iron rail staircase.

“The house was phenomenal,” architect Bill Bocken says. “But over the years, remodels had made the floor plan so confusing that you couldn’t figure out what was what. The kitchen was completely disconnected from the dining room. And if you wanted to get to the dining room, you had to go down a slew of hallways.” A back staircase caused much of the muddle. But because removing this probable servant’s access had structural implications, it took spunk to
let it go.  “I presented the ho-hum, middle-of-the-road remodel scheme, leaving the staircase in,” Bill says. “Then I showed Carin and Hillary the potential if we got rid of the staircase. I was pleased when they agreed on its removal. It was a big deal, because we had to tear down bearing walls holding up the second floor, which meant we had to restructure the house and put in new footings.” 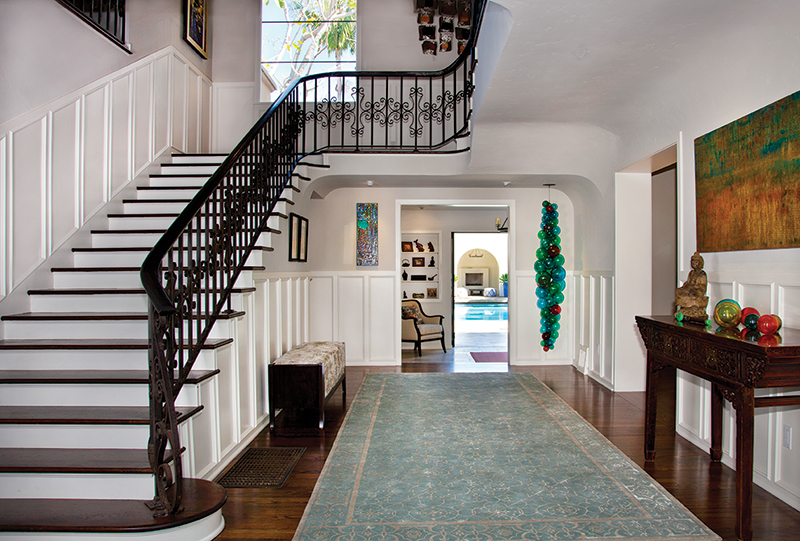 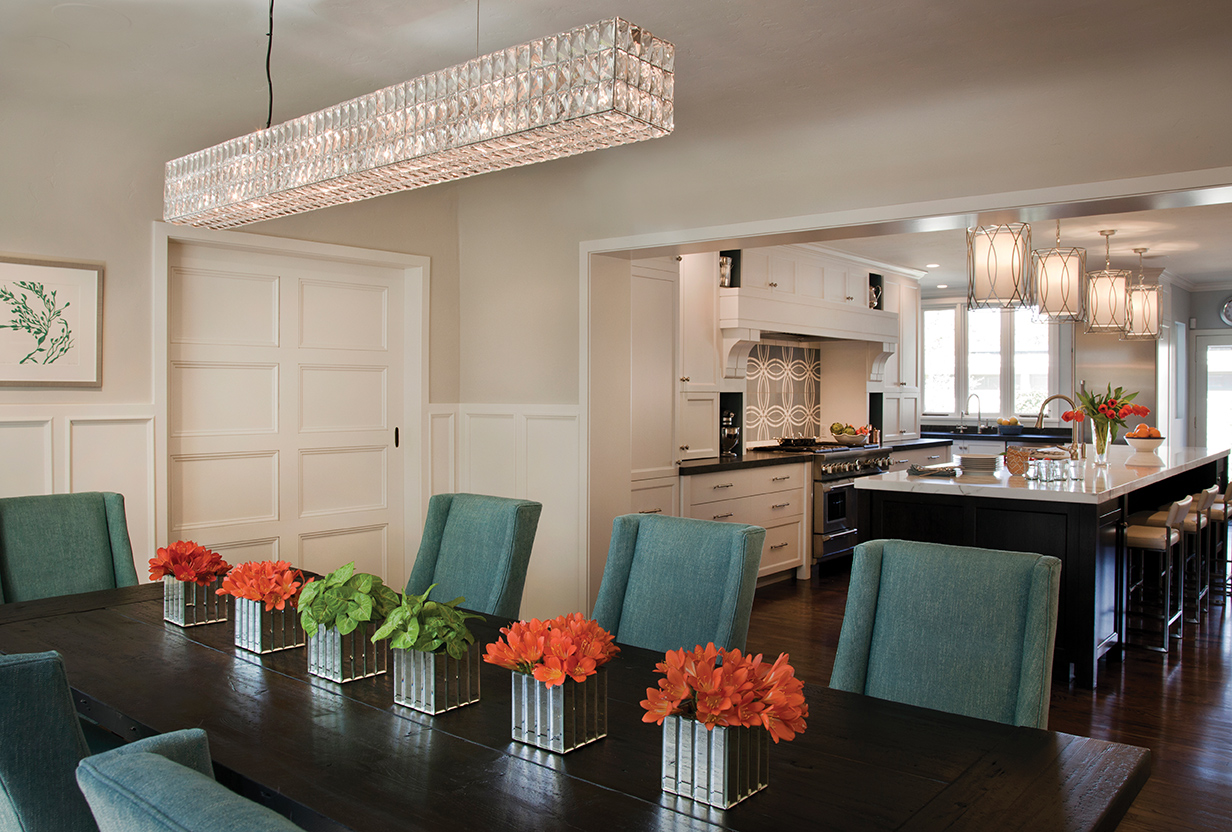 A user-friendly, upgraded kitchen tripled in size. Exposed to the dining room and its window to the street, visible to the girls’ playroom, open to the home office and back-entry mud room, and connected to a casual banquet area overlooking the garden room and pool, the light-filled space erases any trace of the gloomy, cluttered rooms that existed prior to the makeover.

Even the living room — once dingy and dark with heavy, built-in bookcases and shuttered windows — basks in the sunlight brought in through its large picture windows and its open exposure to the garden room’s poolside view. “The garden room is my favorite spot, because it speaks to why we bought this house,” Carin says. “We knew going in that we wanted a house that could bring the indoors out and the outdoors in. Bill had to work with the Historical Resources Board on changing the uninviting, single door that went out to the back yard. But he’s a genius at that, and now we have doors that fold completely open. When we open those doors, as frequently as the weather allows, it’s one seamless area. We can sit inside while the girls and dog are playing outside or vice versa. Our back yard is an extension of our home, and that’s what it’s all about.” 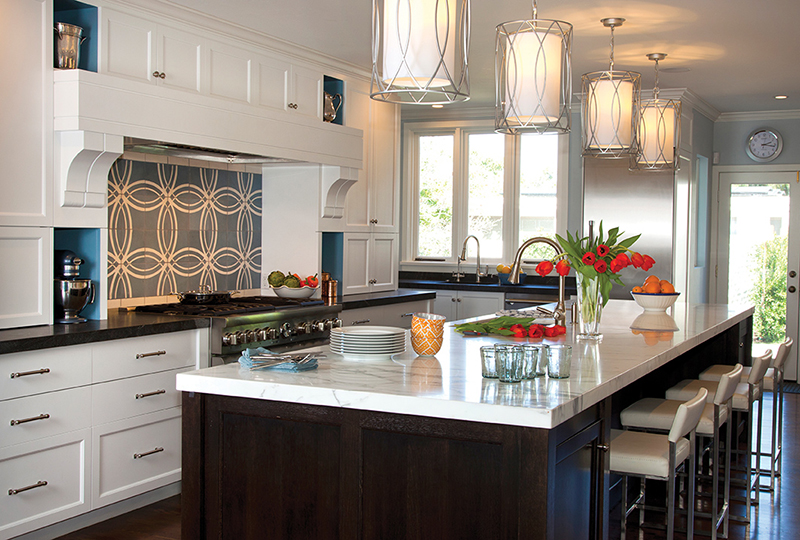 It’s surmised that sometime around the ’60s, someone decided a Mid-century Modern feel for the back yard of this Spanish-style home would be a good idea. Previous homeowners added a gazebo with concrete block walls, landscaped with tropical plants, and installed a pool and walkway cover that made the yard seem small. “It was a huge yard before they separated it with a wall in the middle and put in an unneeded covered walkway from front to back,” Bill says. “It was as though they were worried that someone who came to the house might get rained on.”  With the wall and walkway cover torn down, the yard appeared to double in size. The cracked, lazy L-shaped pool was re-placed with a rectangular one. The pavilion was retained. But applying stucco over the concrete block, giving it arched openings and adding a fireplace completely altered its look. A storage room on the side became the pool’s bathroom with a steam shower. The five second-story bedrooms have their own bathrooms.The girls share a tub area, but a dividing wall provides two sink rooms privately accessed from each bedroom. The footprint of the master suite remains unchanged, except that before the square footage consisted of a dark office, bedroom, bathroom and small closet. 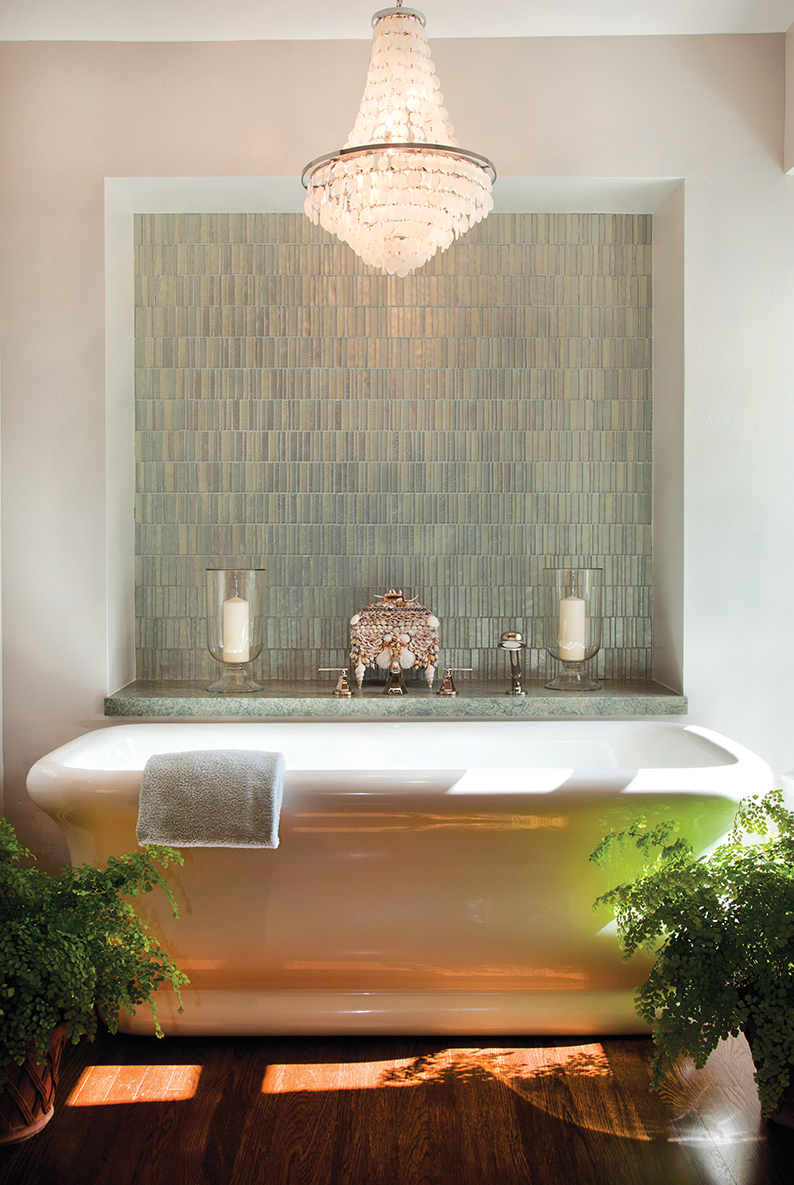 It’s big. For us, we love the master bath’s soaker tub — that is, on the rare occasions that we can take time to soak.” Carin laughs, but she’s not really joking. Along with their roles as parents, they are high-powe red executives.

As busy as they are, though, they have taken time to go through the tedious process of trying to obtain historical designation for the home. Research points to Lilian Rice as the possible designer. There’s also a tale of the residence coming to the rescue as a temporary gallery when works of fine art suddenly found themselves homeless during World War II’s requisitioning of Balboa Park museums. This heartwarming history makes Carin and Hillary fall even more in love with the house. But what’s heartwarming now is watching the girls chase rainbows. “The dining room chandelier has crystal light in it,” Carin explains. “When the sun sets, it casts a thousand rainbows around the room. The girls come running and say, ‘It’s rainbow time! It’s rainbow time!’