Mark Koenig wished to be within walking distance of his favorite restaurants and bars in the neighborhood where he rented. But finding a modern, loft-like home with the raw, industrial style he liked within the suburbs of San Diego posed a challenge.

“I thought, ‘I am never going to get high ceilings in San Diego. I’ll be stuck in either a Craftsman- or Spanish-style house,’” he says. He finally stumbled upon his needle in a haystack when a boxy, nontraditional home priced beyond his budget went into short sale.

“There were so many great ideas to work with in this house,” he says. “I liked the concrete floors, the high ceilings and the roof deck. It had a big west-facing lot, and I wanted a big pool with lots of sun. I just fell in love with the house.”

Architect Christian Rice, whom Mark selected to renovate the residence, likens the former structure to a two-story stucco box with a Spanish-style roof planted on it. “It almost felt like a ghost town façade, because it was so façade driven,” he says. 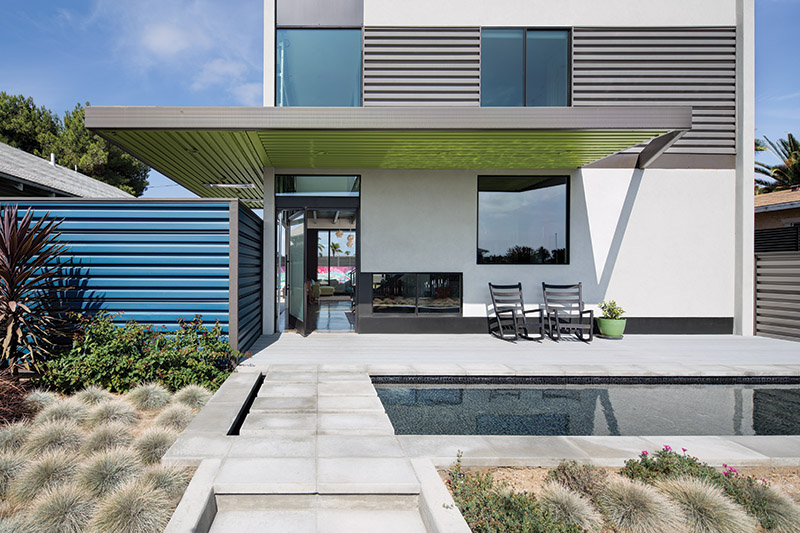 Once the duo started demolition, they could see all the possibilities.

“I kept coming to this house and it kept disappearing,” Mark says. “Even though I envisioned all these changes, I had no idea that everything would be ripped out. But it’s good, because now all the electricity and plumbing are new.”

When just the framing remained, the footprint of the house could be expanded to include an additional 5 feet of square footage in the rear, transforming the two-bedroom/two-bath house into three generous bedroom/bathroom suites.

With a nod to Mid-century Modernism, Christian redesigned the home to emphasize a modern-industrial look with clean lines and a combination of glass, steel and concrete punctuated with horizontal, corrugated metal siding (B deck). 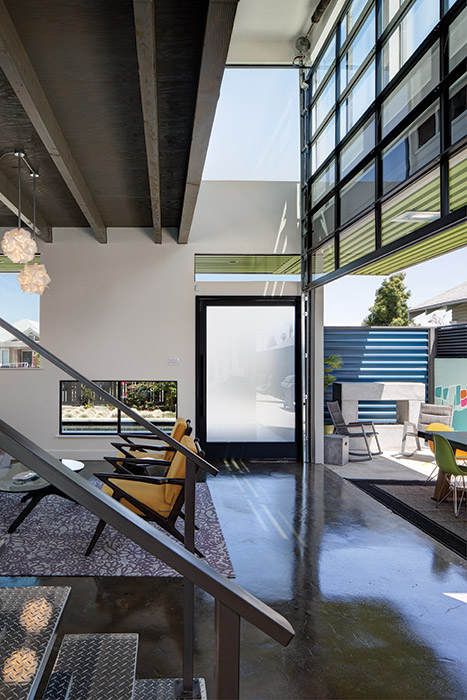 Pops of vibrant color show up in unexpected places, including kiwi green on the underside of a cantilevered patio cover and in marine blue fencing. A steel spiral staircase, painted tangerine orange, coils up to the rooftop deck with sweeping views of the sunset, mountains and as far as Mexico on a clear day.

“I am from West Virginia, so I wanted a porch and rocking chairs.” Mark says. “I couldn’t figure out how that was ever going to fit in with a contemporary building, yet it turned out well. I sit out there all the time.”

“Everyone thinks that window is kind of strange, but it’s totally Christian,” Mark says. “The window is at eye level when you are sitting down.”

“It was just a fun idea and plays off the reflecting pool,” Christian adds. “When you are standing up, it kind of gives you that perfect view down to that pool.”

Interior walls were removed to create an open and airy kitchen, living room and family room.

“These spaces were really cellular and dark before,” Mark says.

The original concrete floors, showing their scars and seams, and the high ceilings were combined with exposed structural elements to give the interior an industrial edge. 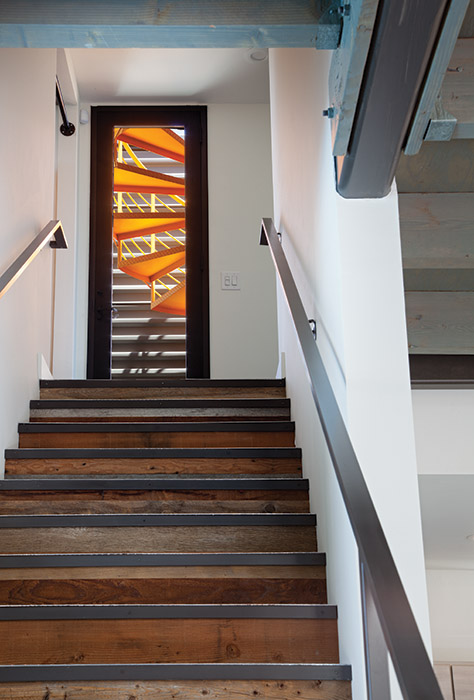 Steel beams were installed to provide support for the cantilevered front patio cover, which allowed the foyer to be opened up to double-height space.

“We had to break into the slab to accommodate the steel structure. But I like the scars in the concrete, because they tell a story,” Mark says.

Bridging the divide between the interior and exterior, a garage door serves as a door-way, raising straight up rather than folding up into the interior space.

“It’s a unique installation; because with most garage doors, you just see them roll back. We really liked the idea that it was positioned in the double-height space so it could vertically lift up,” Christian says. “It’s a great, inexpensive way to accomplish the same goal that might normally cost thousands more.”

The opening allows Mark to extend his living space into the side yard, with room to integrate a dining area and fireplace.

“The dining area was inside originally, but it just took up too much space. It’s something I’ll only use a few times a year, so I’d rather have a sitting area inside and put the dining room and fireplace outside,” Mark says. “It’s very cozy to sit out there now.”

Mid-century Modern furnishings blend well with the design. Family and friends can gather in the sitting room while Mark cooks in the kitchen, which Christian redesigned into a galley layout with a central island plus a wet bar and walk-in pantry to maximize space under the stairs.

“The kitchen was important,” Mark says. “I love to cook and entertain. My mom had six kids, and she taught us all how to cook.” 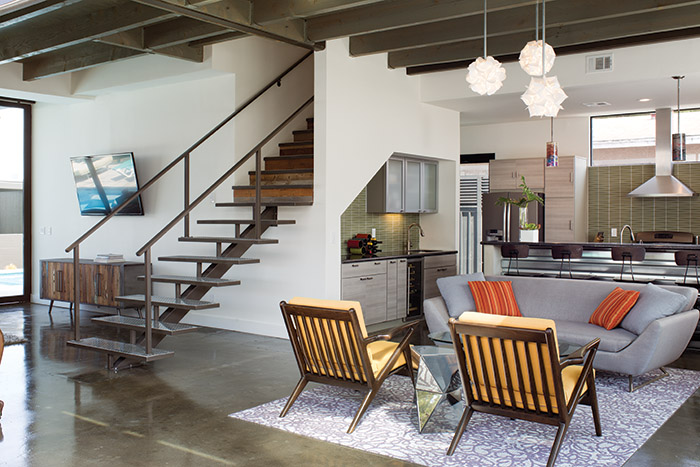 Mark chose finishes in a muted palette, including wood cabinetry with clean lines, Silestone countertops and sage glass tile with a graphic motif. Pendant lights made from the photography of graffiti in New York City accent the kitchen island, as do a splash of B deck along its seating side and an industrial-looking footrest made from plumbing pipe.

The lower half of the staircase comprises floating stairs mounted on a center beam. Diamond plate treads contrast with the reclaimed barn wood used on the enclosed top half of the stairway.

“We didn’t want a heavy mass of stairs,” Christian says. “We wanted to keep it as clean and simple as possible.”

On the second floor, Christian recon-figured a large room and the position of the staircase to design a more spacious, functional landing with two bedroom/bathroom suites.

Quenching Mark’s thirst for water, the back yard was transformed from asphalt into a poolside oasis with composite decking. A covered patio provides plenty of shade, with the dual purpose of adding a balcony off the master bedroom. 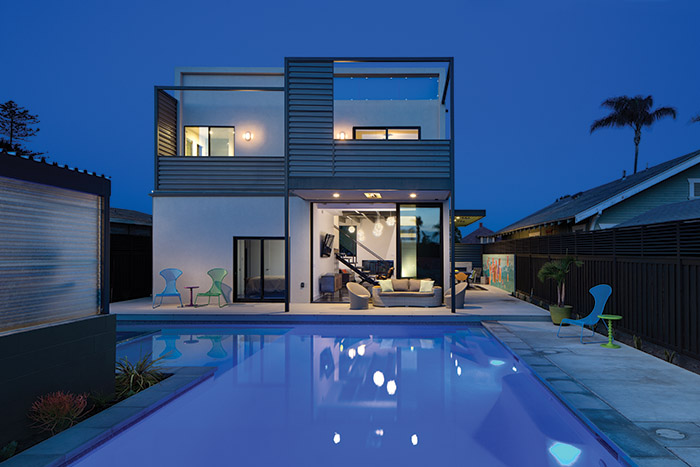 “I wanted the pool to face the entire length of the house with a lot of square footage of water,” Mark says. “A Baja shelf allowed me to increase my pool size another 50 percent without much water. Instead of having it 4 feet deep all the way around, it’s just 1 foot deep, so you get the appearance of a lot of water without a lot of waste.”

Custom, post-modern murals by local artist Nate Schnell run the length of the side and the back yards, with bright colors inspired by Charles Eames chairs.

“Luis Barragan is one of my favorite architects from Mexico, and he uses a lot of color in his work,” Mark says. “I like the Mexican vernacular with color, so I wanted something bright and bold. I wanted to be a little more playful with the murals and to really bring in more animation and life, because we kept the palette pretty neutral.”

“When I see those punches of color, that is something I would never do, but it’s very Mark,” Christian says. “I love that this house is a representation of him. That pop of color adds that next dimension to the design.” 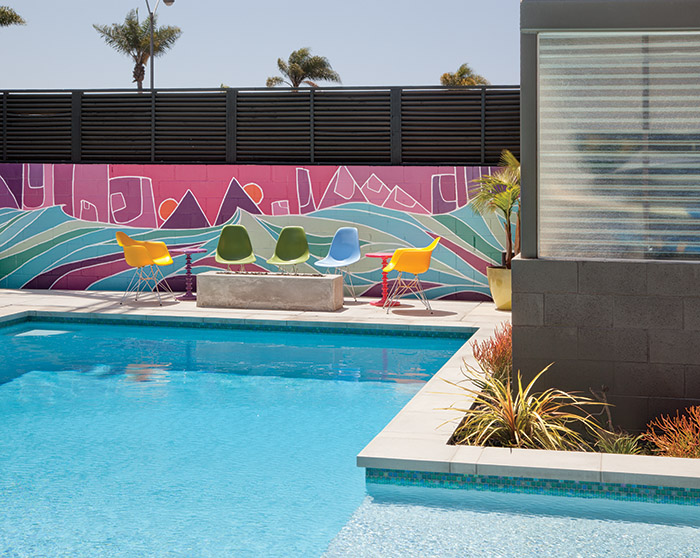 Most of the home’s details evolved with the construction, including many of the industrial accents.

“Everything here was such a work in progress. You don’t go to Wayfair and pick out a bunch of artwork; these things grow and take time,” Mark says, alluding to the pieces he has collected from local artists and through his travels to Mexico and South America.

“I wanted a showcase home that reflects my personality and is an extension of me. Out of all the hundreds of houses that I looked at in the past, I really feel like I was meant to get this house and help it live up to its potential.”