Showcased through a crisp white background that’s like ice cream on a summer afternoon, the breezy greens and blues of this Coronado kitchen bring casual beach living to mind.

“The homeowner sent a picture of a plate with the soft blues and greens she liked, so that piece of china drove the color palette,” designer Elizabeth Thiele Barkett says.

Because the historically designated home’s kitchen was sandwiched between the dining and family rooms, the only natural light it received crept in through a small sink window. Opening both ends of the kitchen not only allowed natural light to stream in, but also captured an ocean view. By absorbing the space of the old kitchen, dining room and some of the family room, the footprint doubled in size. 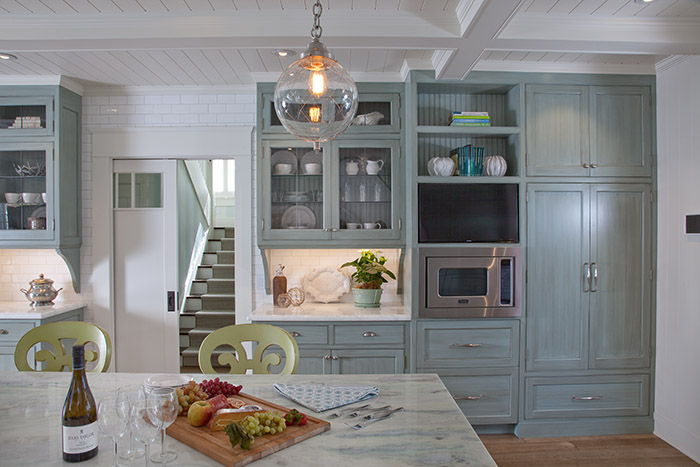 “The kitchen’s proportions and moldings pick up on the home’s 1919 period detailing,” architect Kim Grant says. “The house had distinct Craftsman aspects mixed with traditional Colonial characteristics. We played on that with beadboard backing on all the open shelving and by adding bead detail around the openings of the flush, inset cabinets. The walls are 3-inch-by-6-inch subway tile, with an ocean-inspired tile mural at the stove that speaks to the home’s other distinct style: beach cottage.”

The range, situated where the sink used to be, and the book-matched slabs of Lumen Blue marble on the island countertop highlight the updated cook’s space. On the other side of the island, banks of cabinetry flank a pocket door that hides stairs leading to the bedrooms. One side of the cabinetry features his-and-her microwaves at different heights. The other side features a beverage station.

A large, comfy banquette on the opposite end of the kitchen offers a kid-friendly place for family coziness during casual meals. Upholstered in asparagus green vinyl, the seating adds punch against white cabinetry and is impervious to small children and spills. 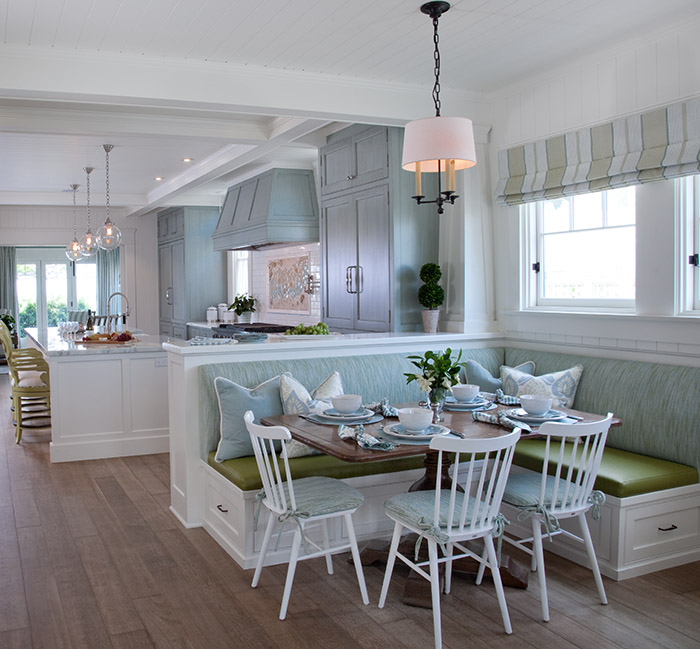 “The green was picked up in bits and pieces else-where in the house, including the island barstools,” Elizabeth says. “But blue is the more consistent color piece. The house painter thought the tints were very flattering. He said, ‘Every time I walk into this house, my blood pressure lowers because the colors are so soothing.’”