Holding court beside a wall of whiskeys from around the world, Jennifer Wren raises a dram, or shot, of a 14-year-old Bourbon Barrel Reserve single malt Scotch. Those attending the high-end Glenfiddich tasting at The Whiskey House in downtown San Diego follow her advice to “chew” their drink — taking small sips and letting the liquor permeate their palates.

Although this Scotch spent 14 years in casks once used to make bourbon, it gets its burn from finishing four and a half months in heavily charred, American oak casks.

“It has an attitude,” says Jennifer, the distillery’s West Coast brand ambassador.

The Distilled Spirits Council of the United States reports that nationwide whiskey sales increased by $2.7 billion between 2010 and 2015. U.S. vodka sales increased by only half a percent in 2015. Meanwhile, single malt Scotch sales were up 13 percent, rye whiskey by 19.5 percent and Irish whiskey by 19.9 percent. Flavored vodka sales were down 1.5 percent, while rum revenues slipped 2 percent.

According to the council, millennials with a flair for discovery and consumers with a fascination for provenance are driving whiskey’s newfound demand and shortage (notably, in Japanese whiskeys).

This increasingly robust market led master sommeliers Alex Minaev and Ryan King to transition from wine to whiskey, opening The Whiskey House in January of 2015.

“Whiskey is the story of mankind, taking what we learned by growing grains, fermenting those grains and putting them in a glass. When I look at these,” Jennifer says, motioning to the wall of whiskey, “I don’t see bottles. I see our heritage.”

“I was surprised by the hint of rum in the 21-year-old,” tasting attendee and downtown resident Ken Gardner says. “I think that’s really innovative.”

Michael Shanahan, who also lives downtown, toured the Glenfiddich distillery in Dufftown, Scotland, where he tasted a 30-year-old Scotch.

“It’s just the process and the love that goes into it — the fact that so much time is involved in creating one bottle,” he says of his appreciation for whiskey while awaiting the evening’s grand finale: the 40-year-old Rare Collection, which retails for around $6,700 a bottle and is made through a process known as remnant vatting, in which a small portion of what remains from the previous 40-year-old is added in a “harmonizing” process.

“There is the possibility that it may have whiskey from 1925,” Jennifer says. “It’s like holding heaven in a glass.”

At The Whiskey House, which offers more than 1,000 whiskeys, those wishing to savor liquid heaven with a budget grounded on terra firma can sample an array of flights, including several years of Glenfiddich whiskeys, for $25. Other offerings include whiskeys from California, Oregon, Ireland, Japan and various whiskey-producing regions of Scotland.

Bartenders at other whiskey hotspots — including Aero Club in Little Italy and Seven Grand in North Park — know their whiskey and can suggest sips in any price range, for everyone from the aficionado to the inexperienced and inquisitive. 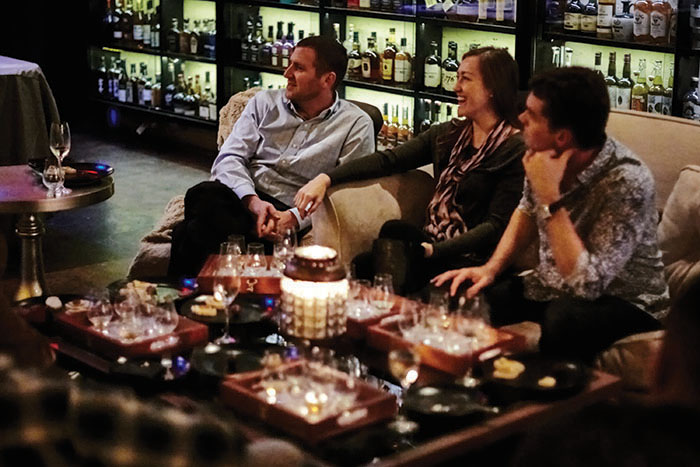 If you are dying to try the rare and highly-sought-after Pappy Van Winkle (so popular that the Pennsylvania Liquor Control Board established a lottery for sales of the limited-edition bourbons), The Whiskey House, Seven Grand and Aero Club all have it. But it will cost you upwards of $300 a shot for the 23-year-old reserve.

A work-around, which Seven Grand General Manager Brett Winfield refers to as “poor man’s Pappy” — a mix of Old Weller Antique 107 and W.L. Weller 12 — can be had for a fraction of the cost.

Aero Club Bar Manager Chad Berkey notes that, as with Pappy, the second-most dominant grain in W.L. Weller is wheat, which gives it a soft flavor profile similar to Pappy.

“You can try the Weller and have a really good idea of what Pappy is like,” he says. “I’m not talking about the 20- or 23-year-olds, because those are exclusive bourbons. If you can find them and the price is right, definitely try them.”

Brett adds, “Pappy is very, very good whiskey. But, to be honest, it is not worth the price. We have tons of whiskey that are $150 to $200 a shot cheaper, and I can almost guarantee you’re going to get just as much enjoyment out of them.”

Last year, Seven Grand converted its rear space to Bar Three Piece, a whiskey appreciation room patterned after the whiskey bars that Brett encountered during a visit to Japan. The space serves rare and discontinued whiskey, Scotch, bourbon and rye neat or on the rocks, as well as several classic whiskey cocktails.

After joining Aero Club, Chad became so immersed in whiskey culture that he co-authored The North American Whiskey Guide From Behind the Bar, which reviews more than 250 Aero Club whiskeys and includes 30 cocktail recipes.

The first written accounts of whiskey distillation come from Scotland and Ireland in the 1400s, leading to the craft’s eventual expansion into North America and back to Europe. Today, whiskey also is produced in India, Tasmania, France and Japan.

“It has a little bit more sweetness and is a little bit easier on the palate,” he says. “We’ll recommend they try it straight, see how that goes, add an ice cube or two (to open up the flavor), let that settle in and try it like that. If it still isn’t what they’d hoped for, we can easily turn it into a classic cocktail like an old fashioned.”

Chad proposes whiskey novices ask their bartender to offer a blind taste of a bourbon, rye, Irish and Scotch whiskey to find out what type of whiskey they lean toward.

Seven Grand General Manager Brett Winfield suggests people think of whiskey as liquid bread, taking on the flavor of the grains from which it was derived — including the standard corn, barley, wheat and rye to more exotic grains such as quinoa and blue corn.

Like bourbon, “cornbread is very sweet, and very rich,” he says. “Rye bread is a little bit spicy and sharp, with some herbal notes to it. Wheat bread is kind of in the middle.”

Seven Grand trains its bartenders to ask the right questions of patrons “to tease out what they like,” Brett says. “We have a lot of knowledge, but it’s mainly because we’re exposed to all this stuff. In this bar, you learn a lot about whiskey through osmosis.”