Creativity on the Forefront

A year ago at Mingei International Museum, you might have encountered a stilt-walking zebra wearing a bright red, sequin brassiere and carrying a parasol or a stocky man sporting a flouncy white skirt over white tights and go-go boots, a white wig and bunny ears, and a white-painted face with pink nose and eyes.

Could this have been a promotion for the museum’s latest exhibition of world folk arts?

No, they were part of Vanguard Culture’s Avant Garde Gala. The event returns on June 25 with more of the same, including multiple acts of entertainment, culminating in a fashion show combining the visions of body painter/headdress maker Michael Bui and Hollywood designer Merlin Castell.

The brainchild behind the gala — indeed, behind Vanguard Culture itself — is Susanna Peredo Swap. An actor, jazz vocalist and arts curator, Susanna “had an opportunity to study” at the Sorbonne and École du Louvre.

“I came back from Paris very inspired,” she says. “I met someone there who had an organization that incorporated visual and performing arts, but created wonderful, intimate gatherings inviting artists in all genres to collaborate. I realized we didn’t have anything like that in San Diego.”

From connections she made while curating, Susanna says she knew there was a vibrant community of creative minds and that there was a lack of communication between those individuals.

“I put together house parties,” she says. “And I began seeing exactly what I hoped would happen: People started galleries together and dancing together in museums.”

Around the same time, she came up with another idea.

“I receive hundreds of emails from people promoting their arts events. It’s almost too much,” she says. So she started creating a list of her top picks.

“I know there are others that do this, but they show you everything in San Diego,” she says. “I wanted to be a curator of the community and introduce people to organizations or artists they may never have heard of.”

In three years, Susanna has reached a subscribership of more than 4,000 for her weekly e-newsletter. The Vanguard Culture website includes reviews and interviews from six “cultural correspondents” and a section profiling Causes of the Quarter, which also get real estate on each issue of the e-newsletter.

As founder and CEO, Susanna maintains the website, but has an active advisory board of five women and an outreach and development director. Last year, she applied for 501(c)3 status to enable Vanguard Culture to apply for government grants. 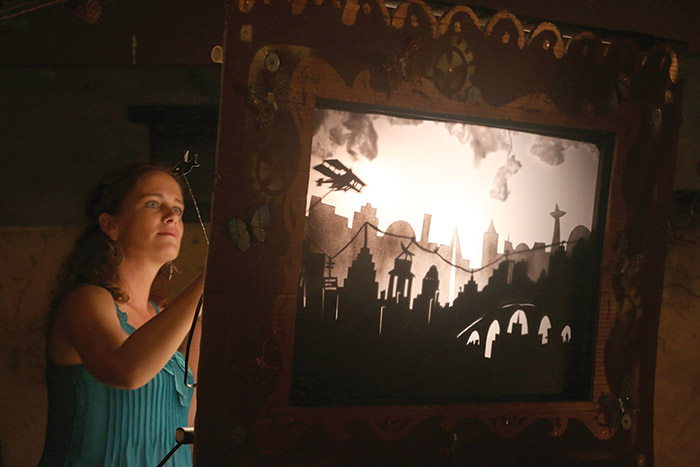 “We really want to develop our outreach programs and be able to host events that will bring more funding to our Causes of the Quarter,” she says. “Our target audience is culturally savvy, socially conscious indiv-iduals.” That often translates as individuals in creative disciplines.

“Artists tend to be very selfless and em-pathetic to people in need. Often we have struggled with being in need if we are really pursuing our passions,” Susanna adds.

As for the “house parties,” they are now known as Foodie Soirées and are intended for networking among professionals in visual, performing and culinary arts. Invitations go out to a list of more than 400 people involved in one of the aforementioned arts; the first 50 people to RSVP may attend. The event is free, but each guest is asked to bring a sophisticated dish. The evenings include an array of art shows and live performances.

“When Foodie Soirées began, it was more like, ‘If you have an instrument, bring it. There was always music — someone bringing a guitar or playing a piano, or somebody showcasing a new monologue,” Susanna says. “Now it has become more formal. These are their peers. Somehow that transforms into an opportunity to showcase what they do and potentially collaborate.

“I never ask them for more than 10 minutes; they’re also bringing a dish,” she continues. “They’re doing it in the spirit of sharing. We don’t pay them, but we don’t charge [for the soirées], and it costs manpower and requires coordination with the homeowner, bringing in a team to set up and light the space, break down and clean. People we have asked to perform understand that.” 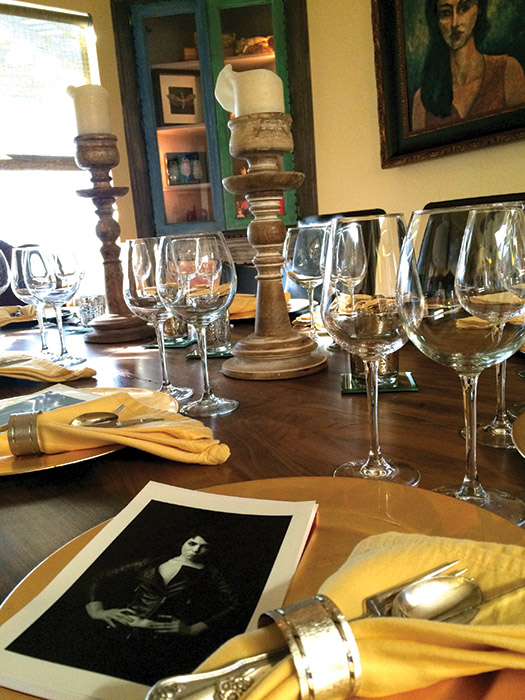 The Foodie Soirée is not a moneymaking venture, so last year Susanna introduced An Artist @ the Table, a quarterly series of professionally catered dinners for nine in a private residence with a local leader in the arts (upcoming are architect Jennifer Luce on Aug. 27 and mixed media artists Einar and Jamex de la Torre on Oct. 22).

“Through [An Artist @ the Table], we were able to end the year in the black,” Susanna says. “The gala was intended to bring us over the top to pay our writers a stipend.”

“The Mingei capacity is 550 standing, so we are looking to hit 500 this year,” Susanna says. “I think that’s going to be easy, because the first year really is the hard part. We got so many emails from people who came saying they are looking forward to this year’s event.

“It feels really good having money in the bank and being able to brainstorm events for the coming years,” she says.