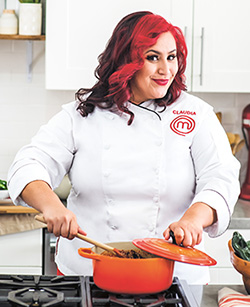 When attending a PBS event at The Lot in La Jolla this past April, I spied Claudia Sandoval a few gatherings of people away. She happened to be looking my direction, and when I pointed to her and smiled, she returned a similar look of delighted recognition and immediately walked over.

She didn’t know me, but that’s the sort of person Claudia is. I know this because (1) I watched her compete the entire Season 6 of MasterChef, (2) I have since heard people who know her speak highly of her friendly nature, and (3) I enjoyed a phone conversation with her this morning in connection with her cookbook signing this Friday at Bazaar del Mundo.

For those not in the know, Claudia made San Diego proud as our local home cook turned MasterChef winner and, hence/now, author of Claudia’s Cocina: A Taste of Mexico.

I couldn’t let the opportunity go by without asking her to dish a bit about behind the scenes at MasterChef, but there’s much more to learn from Claudia. Here are the highlights of our talk.

What was the catalyst for your deciding to try out for MasterChef?

There really wasn’t a catalyst. It was more on a whim. I had a friend working for an entertainment weekly who said, “I think the auditions are this weekend.” I had been a fan. From the seat of my couch, I thought, “I could do that.” But I made every excuse not to go to the auditions. That morning, I was talking with my sister and asked her, “What should I do?” She looked at me and said, “Well, it’s just an audition. It’s not like you are going to be on the show today. See what happens.” I drove to Trader Joe’s in La Mesa and bought all my ingredients to make pasta.

But pasta is Italian, and you’re recognized as an expert in Mexican cooking.

After my win, I have been criticized significantly because people say I only cooked Mexican food. It cracks me up, because I can cook a lot of other dishes. One of my favorite cuisines is Italian. I made a three-cheese tortellini because I wanted to show technique and breadth of knowledge. I also know a lot of French technique and other Latin cuisine.

To compete on MasterChef, you obviously have to possess confidence that you have the ability to win, but was there a particular moment in the competition when you could “taste” victory?

I think the pivotal change was when I won the mystery box challenge. I was the first woman all season to win a mystery box. When I won, it was because my idea was so original. We had one ingredient and could only get pantry staples like eggs, milk, and flour. I made a savory tomato Napolean. I dreamed about it the night before. Chef Ramsay said, “This is mind-blowing.” That was a big moment for me. I could see in his eyes: “Wow, you just went from one level to a completely other level.” That was pivotal in my confidence — in digging deeper and finding ways to be innovative.

Aside from winning, what was the best part of competing in MasterChef?

I have been very lucky to walk into [restaurant] kitchens and do pop-up events. One of the biggest things that I came away with was learning how to work in a kitchen. The show is about home cooks. The level to which they push you, you start thinking in terms of efficiency. I have been able to step into Michelin-star kitchens and work at their pace and even faster, because I was tempered and thinking of ways to maximize the amount of time.

What was the hardest part of authoring a cookbook?

The timeline. I think normally when somebody writes a cookbook they have a year or more to taste test and play with recipes. Because the book needed to be ready for the new season [of MasterChef], I had 12 weeks to write it all. The show was like a mini boot camp: You go to bed early, you get up early, and you never know who’s going to yell at you. But it’s only the beginning. That’s the biggest takeaway. It’s just the beginning. … It’s been so much work, and I am so blessed to have this much work.

Do you have a full book tour in addition to Friday’s event?

The book tour started in May. I have done three signings in San Diego. I have been to Chicago, New York and San Francisco. I was on The Dr. Oz Show. I am heading back to Chicago and am going to Orlando in a couple of weeks.

Watching the show, it appears that competitors have to make a snap decision on what they can make and then literally have to run through the pantry to find the ingredients they need. How much of that is real?

One hundred percent! Sometimes there are small pauses just so they can reposition cameras, but that only takes 30 seconds to a minute. There were times in the beginning, because you are so new to the kitchen, that you kind of think they will give you something, but no. We saw people flat on fail because they didn’t bake; they had never made a pie before. We were so competitive, we thought, “Good, they should be going home.” We were allowed to take up to five cookbooks to read whenever we weren’t on set, but you couldn’t make notes, and your pockets had to be empty. We could practice in the kitchen and would have mentors, people teaching us. You have to have some semblance of which flavors go together. How innovative can you be? You have to use flavors or ingredients to create something that hasn’t been done before, or if it has, to execute it well.

What is Gordon Ramsay like when the cameras aren’t rolling?

He is a very encouraging person, very mentor-like. People watching the show think he is only constantly giving people harsh feedback. In real life, he is more like a parent: You know your children can do better, and you push them to that. He is not as casual as Graham Elliott, but still very encouraging and saying, “You have to shake it off and get going” and giving us really incredible feedback.

You’ll be on the MasterChef cruise in November. Have you been on a cruise before?

I have never been on a cruise, but I really love boats. One of the biggest reasons I am excited is because of the places we are going: Puerto Rico, Turks and Caicos, and the Bahamas. One of my bucket-list items is digging my feet in a white sand beach. So I am really looking forward to fulfilling one of those dreams. I also am excited about the demo classes. I’ll be doing one on street fare and teaching people to make tamales. I will get an opportunity to be a little more one-on-one than you can be in a ballroom setting.

You’ve stated that you have plans to open a restaurant, perhaps in partnership with another chef. Any news on that front?

I was thinking of opening something with another chef in the United States who is also doing amazing things with fine dining Mexican cuisine around the end of 2017. But the book tour takes me through September. I am a stickler for detail; I want to fully invest in the concept and planning. I would like to have the first fine dining restaurant in the South Bay [San Diego]. which is underserved in fine dining venues. I want to be able to change that. That’s a biggie for me.

Claudia Sandoval will be at Bazaar del Mundo Shops in Old Town from noon to 2 p.m. on Friday, July 8. She will greet fans, sign her cookbook and, working with Casa Guadalajara, treat guests to favorite dishes from Claudia’s Cocina: A Taste of Mexico.