A School of Thought 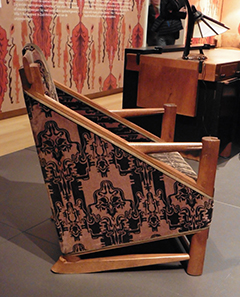 My initial impression of architecture in Holland was essentially this: “Amsterdam must have the largest concentration of bricks in the world.” (I could be wrong, not having been all over the world; but I’ll stand by my impression for now.)

I recently went to The Netherlands to see the largest amassed collection of works by Hieronymus Bosch in his hometown of ’s-Hertengobosch on the 500th anniversary of his death. But that’s another story. This is about architecture and interior design based on my in situ education about the Amsterdam School, a movement from the 1910s to 1930.

I read in the Hello Amsterdam magazine in my hotel room that “insurgent newcomers” such as Michel de Klerk, Joan Melchior van der Meij and Piet Kramer were “not exactly welcomed with open arms by their fellow architects,” who were creating structures with strong resemblance to ancient Dutch cathedrals and castles.

An example of the Amsterdam School is the Het Scheepvaarthuis (The Shipping House), which is now home to the five-star Grand Hotel Amrâth. Six shipping companies spent more than one million guilders to have their headquarters built. I’m not sure how much one million guilders in the early 20th century equates to in early 21st century dollars (let alone euros), but a million of anything tends to impress me.

In the event you have a vacation to schedule in 2016, you might like to know that the Grand Hotel Amrâth, in celebrating the centennial of the completion of its building, is offering a “100 Years Amsterdam School Package” that includes tickets to the Amsterdam School Museum (Het Schip).

I did not have time to visit Het Schip, but did have the good fortune to discover on my visit to the Stedelijk Museum an exhibition (running through Aug. 28) titled Living in the Amsterdam School: Designs for the Interior 1910-1930.

Features that mark the designs from this period include rich, contrasting colors; expressive forms, such as convex and pointed; ridges, serrations and other sculpted details; and geometric patterns.

Shown above and below is a sampling of furnishings in the exhibition. The wall light on a leg comes from Piet Kramer’s design for the De Bijenkorf department store (1924) in The Hague. If today’s hubs of consumerism featured architectural elements like Kramer’s leggy lamp, that would lure me into them much more than the “must-have” brand names they advertise.

I’ve met many people in San Diego with a Netherlands heritage — including San Diego Home/Garden Lifestyles’ own Managing Editor Eva Ditler, American Institute of Architects San Diego Chapter Executive Director Bastiaan Bouma and interior designer Beppie Mostert. Before my trip, I picked their brains about the Dutch language and travel tips. Since they are involved in the design community, perhaps I should have asked them about the Amsterdam School. But that’s one of the delights of wayfaring: You discover things even on your own. 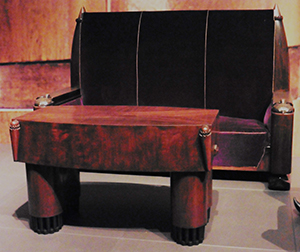 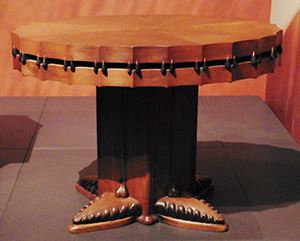 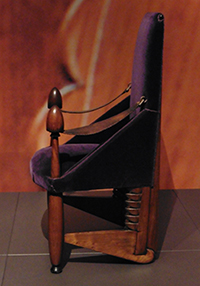