“Part of our mission is thinking about how to engage non-museum-going audiences. That’s at the core of all the programs we offer,” Executive Director Ginger Shulick Porcella says of the organization’s Project Space @ Horton Plaza. “What better way to engage people that don’t go to museums than at the mall?”

During this month’s 24-Hour Performance Festival (April 22-23), Project Space visitors can view real-time streaming video performances from New York, Berlin, Paris, Dubai and other cities around the world, while people in those cities can watch a performance happening at Project Space.

Events and workshops are scheduled throughout the year and possibly into 2017 (view the full schedule at sandiego-art.org/project-space-schedule-of-events).

The space was initially granted to artist Cat Chiu Phillips, who had an installation composed of recycled plastic yarn art on the second level of Horton Plaza.

Realizing she was too busy to fully util-ize the windfall of largely donated space, she reached out to Ginger, with whom she had previously collaborated, to help her program workshops and exhibitions in the space through the end of 2016. 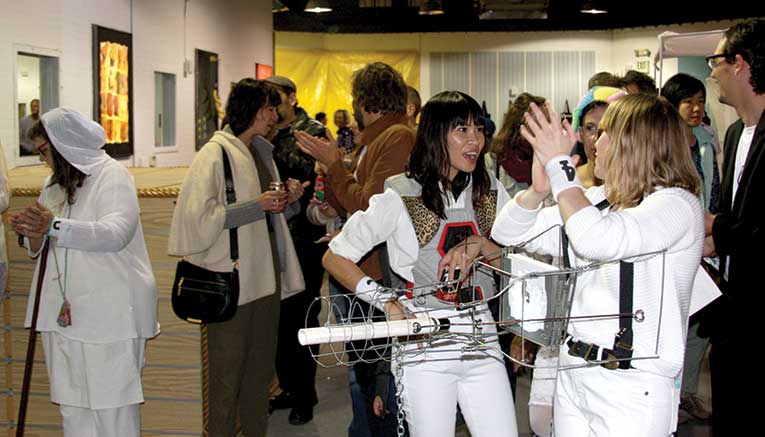 In May and June, Cat will conduct work-shops at Project Space, in which the public will help her make a large-scale crochet installation from recycled plastic yarn.

SDAI also is using Project Space as a creative laboratory, where new work can be unveiled to the public and refined for possible inclusion in SDAI exhibitions at its Balboa Park headquarters gallery.

For example, in February, artist Aren Skalman held workshops at Project Space involving participants from the Blind Community Center of San Diego. The multimedia output from those sessions is included in the Balboa Park exhibition Sweet Gongs Vibrating, running through
May 29. The exhibition artists were asked to contribute work that engages the full spectrum of senses: sound, sight, touch, smell and taste.

The art created in Aren’s workshops was intended to evoke the location of Horton Plaza through the use of tactile and audio forms from the perspective of the blind and visually impaired. Participants gathered textured rubbings, or frottage drawings, from sites within Horton Plaza, which then were collaged into finished compositions. They also made recordings, including aural signs the blind use as navigational cues, and other ambient noises.

“I am interested in how the blind and visually impaired navigate space,” Aren says. “Horton Plaza is notoriously difficult to navigate, raising issues of accessibility, even for the sighted and able-bodied.”

“When I came to SDAI, all they showed were paintings and sculpture and two-dimensional works. All of our language — printed, online — said ‘visual arts organization.’ I took those words off of everything,” she says. “I think it’s a really outdated way to think about art, because what if you can’t see? Art does not have to be primarily a visual experience. It can be aural; it can be tactile. I’m always thinking about how museums can create a more actively engaging audience experience.”

Following the closure of its similarly sized North Park space, which it operated on Ray Street from 2007 to January of 2015, SDAI sought a place to promote emerging artists and draw people to its Balboa Park gallery. Ginger says rent on the North Park space was too expensive and workshops offered there — such as watercolor painting, stained glass and basket weaving — no longer suited SDAI’s evolving mission.

“Now we have the opportunity to start from scratch and create the programs and the organization the way that we want them — more aligned with our mission, vision, brand and look,” she says.

Chloe Freeman of if. Dance Theater, which performed at Project Space in late January, says that during the dance she was conscious of passersby peering in the front doors or coming in and taking a seat near a tapestry of 700 notecards that served as a canvas for the performance, slowly but surely, becoming slightly.

“We were excited to be in this mall setting, where maybe dance isn’t usually seen. That was very intriguing and exciting to us. I thought that sort of brief, passing audience was kind of cool,” she says. “We’re interested in the audience in transit, where we’re like a gallery showing.”

“We want it to be a community space where audiences can engage with the artists and contribute to making something,” she says. “It’s one thing to have your work on display in a very formal setting; it’s another to open up your studio or your practice to people that are just happening by window shopping.”