Archisects — the local team of interior designer Anna Sindelar and her architect hus-band, David — chose a fresh robin’s egg blue for the street frontage as part of their update for the former Lei Lounge. The square façade conceals what lies behind it. 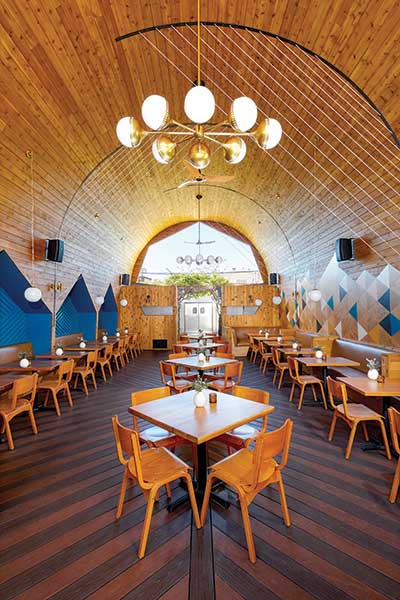 Though the interiors are designed cohesively, Madison is essentially two venues on one long lot. A fully enclosed bar comprises the streetfront end. Behind it lies a tunnel structure that serves as an open-at-both ends dining room.

“Lei Lounge had a steel car-wash structure covered in vinyl and plastic ivy,” Anna says. The design team lined the inside of that tunnel with tongue-and-groove cedar planks and capped each end with a Dutch barn-roof shape to give the space finesse and a cozier feel.

Ropes strung taut at opposing angles from wall to ceiling peak make a light but noticeable presence. A similar treatment of crisscrossing ropes divides booths in the bar.

“The repeating rope ‘harp’ installation came from Jeff’s love of music,” Anna says. “Inspiration can come from anywhere, and design comes when an element looks as if it belongs to the space. David and I come from fine arts backgrounds, so we relish using unconventional materials. The ropes are elastic, so they will maintain the taut quality that harp or guitar strings do. We used them to subdivide the space to give a feeling of intimacy at the booths in the bar and to bring the tall ceilings in the patio area down to the diners, making the space feel less cavernous.”

Small wood tables and chairs are set at an angle down the center of the dining room. More small tables with built-in bench seating along the walls line each side. Along one wall, the benches are tucked into niches backed with a deconstructed chevron design and painted blue. Triangular panels on the opposite wall mirror the pointed tops of the niches. 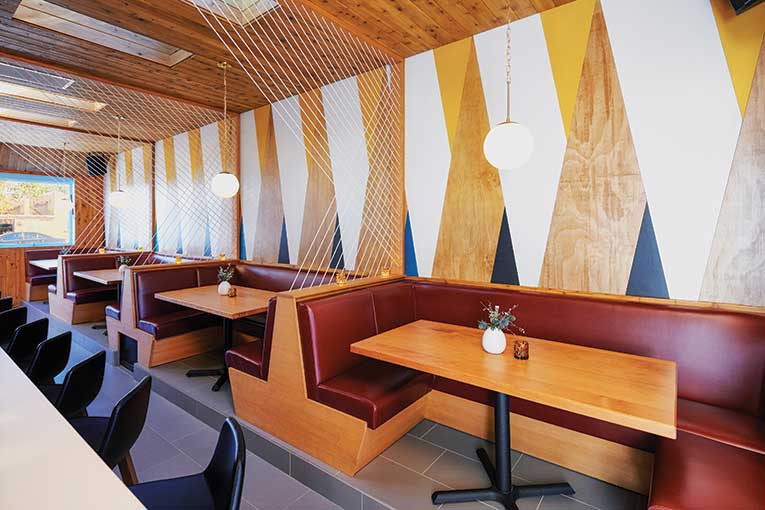 Anna says her inspiration for the geometric elements are drawn from her infatuation with packaging design and origami. She conceived a take on Mid-century Modern style with a random pattern of pine plywood triangles — mostly natural wood grain, but with some painted blue, mustard, pale pink, gray and white.

In complementary fashion, she installed pine cut into isosceles triangles for a repeat-ing pattern on a wall in the bar, which has cedar end walls and a cedar-lined ceiling featuring multiple skylights.

Two elements that did not need replacing were the white subway tile bar and the dining room’s wood decking, which is laid diagonally toward the center from the four outer corners. But previous visitors would not recognize the place
in photographs.

“We took our design goals directly from the restaurant’s main mission: to serve the neighborhood for years to come,’” David says. “We love older cities in Europe where centuries-old architecture might coexist with a gleaming modern staircase.”

“We drew our Victorian Era storefront inspiration from the neighborhood architecture and history,” Anna adds. “Before, the place had a 1990s strip-mall look with large glass panels separated by 2-inch aluminum strips. To achieve a sense of timelessness, we chose to focus on wood because it’s classic, warm and inviting.”

“What a great gift to be given as a designer,” he says.