One possible definition of confidence could be installing fire pits at a restaurant that spent seven months rebuilding after major fire and water damage. This would be the downtown waterfront’s Top of the Market, the deluxe seafood room above the always-buzzing The Fish Market. The outdoor fire pit area is comfy and cozy, but the real beneficiary of the fire (strange way to put it, but accurate) is the interior room, a gracious space with a warm, contemporary look entirely different from before. New Chef Stafford Mather salts his mostly seagoing menus with small plates like pears and Burrata with Marcona almonds, honeycomb, saba and extra virgin olive oil. Equally good, an appetizer of crispy Brussels sprouts and artichokes sounds a bit clichéd until you taste the accents of Meyer lemon yogurt and sumac. Local swordfish, rarely encountered these days, is mesquite grilled, finely garnished and sauced, and as luxurious as the setting. There’s so much to like among the dishes that the sweeping view becomes more bonus than focus.

IF CAROUSELS AND CUISINE turn your head, step aboard the magical merry-go-round that whisks chefs from one homegrown restaurant group to another at abracadabra speed. This column has noted that Corporate Executive Chef John Medall of fast-growing The Patio Group was consumed by readying Liberty Station’s Fireside by The Patio — only now, he’s not. Antonio Friscia, recently at Gaslamp’s co-owned and neighboring Don Chido and Rustic Root, accepted the role of consulting chef under his new Legal Restaurants brand. John says The Patio’s expansion mode has him so busy that Antonio was recruited to radically revise the concept for the former Naval Training Center’s firehouse. “Antonio is doing all the groundwork for Fireside. I took it to a certain point, and he’s taking it from there,” John says. The historical fire-house setting underscores the theme of food cooked by fire.

SO, OF COURSE, the talented Mike Brown was lured away from Tracy Borkum’s hugely successful Cucina Urbana as Fireside’s
chef de cuisine, which means he will oversee preparation of Antonio’s menus. Tracy, meanwhile, has other fish to fry (so to speak) in Kensington, where she finally has decided on a new identity for her long-closed Fish Public. In a sweet location beside Ken Theater, it will be called Cucina Sorrella, which embraces her signature Cucina moniker. Pasta will command menus that purportedly were developed in consultation with Kensingtonians, which compels us to wonder how spaghetti and meatballs might be localized to suit this charming neighborhood. 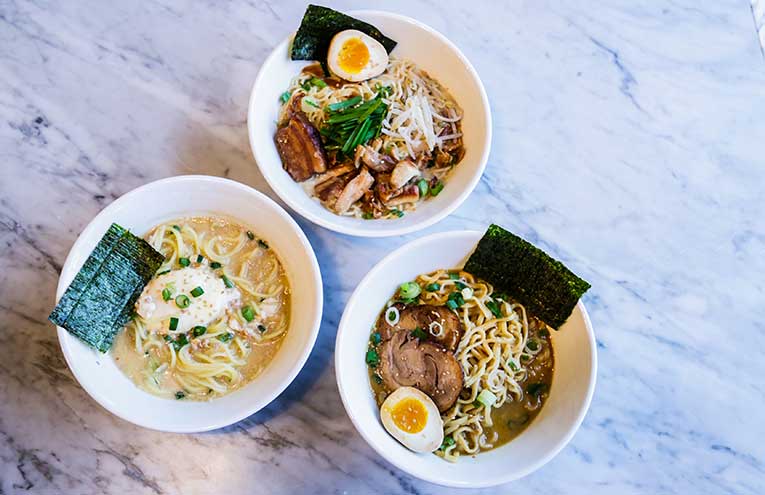 SOME VINTAGE STRUCTURES service East Village’s ambitious re-creation, including a one-story row of storefronts along E Street between Ninth and Tenth avenues. At the west end of the block, the new Tajima East Village (the chain’s fourth footprint), serves seriously beguiling attractions, including a multitude of build-your-own ramen soups and such unusual appetizers as takoyaki octopus fritters.

INSIDERS CONFIRM that Ingrid Croce closed Croce’s Park West, which reportedly was nicely profitable, to pursue projects unrelated to hospitality. Luckily for fans of the Balboa Park-facing venue, Harry’s American Bar & Grill proprietor Garo Minassian stepped right in with plans for a casual, affordable “brasserie-bistro,” whatever this may be (in France, it’s one or the other). Garo closed his Golden

Triangle restaurant at the end of 2015 to avoid a rent-doubling lease. The amiable restaurateur and Bankers Hill should be a good match. “I’ll be catering to locals in the neighborhood,” he says. While his expertise is Italian fare, his new Parc will be “a brasserie-bistro in typical French style, like Michael Mina’s Bouchon in Vegas,” he says. “But my price point will be low, to compete with what Carl Schroeder is doing at Bankers Hill.” The concept specifies lunch and dinner menus of casual, modern French cuisine balanced with American fare.

THE CURRENT FASCINATION with Mid-Century Modern design provides the new concept for Born & Raised, a classic steakhouse opening in late summer in Little Italy. It’s next to Po Pazzo, the neighborhood’s original steakery, which the Busalacchi family is remaking into Barbusa, a casual joint with distinctive Sicilian flavors. Set to cost a bundle (for the build-out, that is), Born & Raised will dry-age meats on premises, house a retail butcher shop and pluck produce from the on-site “sustainable urban chef’s garden.”