Loaded with glitz, a downtown penthouse bats a thousand in dazzling design

Architect Dale Combs envisioned bleachers as an apt design element in the living room of a penthouse loft across from Petco Park.

The suggestion was a joke. But, he says, “The first day I was in the place, I was blown away, because from the living room I could look straight down into centerfield. I could see any ball hit except maybe the far left corner of the outfield.”

When Dale asked if the homeowner played baseball, the answer was a resound-ing “no.” In fact, he wasn’t even a fan of the game. So, although the thirtysomething-year-old had a few out-of-the-ballpark ideas for his interiors, installing bleachers in the living room wasn’t one of them. 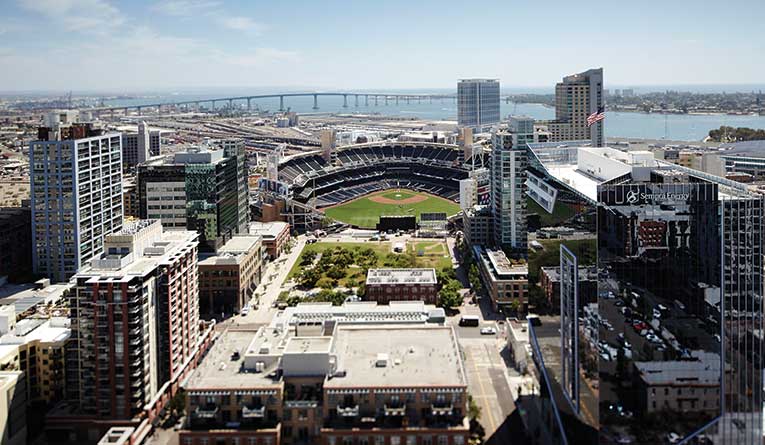 “There were things my client wanted that were out of the norm,” designer Joan O’Haver says, “like a Cryo-Fog system that, at the flip of a switch, mists up the whole place like a nightclub; a door that opens with a ‘whoosh’ sound effect à la StarTrek’s Enterprise; a hidden doghouse; and a glassed-in kitchen that, when you push a button, the glass turns opaque so you can’t see the kitchen.”

The homeowner got his special-effects fogging machine and door, as well as a concealed doghouse behind a lacquered, zebrawood wall that looks like a kitchen pantry. But instead of a push-button glass wall, a 48-inch half-wall between the dining room and kitchen solved the dilemma of visible kitchen clutter. 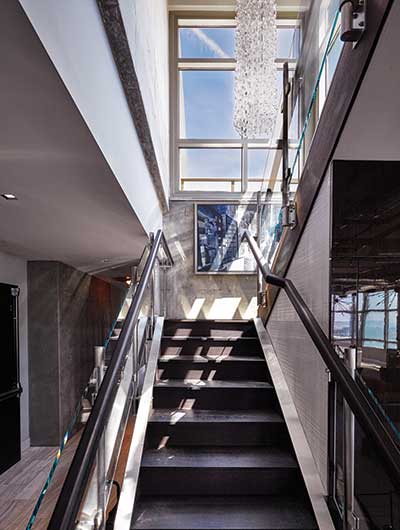 “We compromised with a dynamic, all-mirror-and-glass kitchen back wall that has polished nickel and glass upper cabinets,” Joan says. “Now what you see is this beautiful back wall.”

Ritzy crystal chandeliers, silver-hued wallcoverings and shiny metals glisten from every space in this dwelling that began as an empty shell. That’s because the homeowner, who spends a lot of time shuffling between Miami and Las Vegas where over-the-top flash reigns, wanted a similar glam aesthetic for his San Diego rooftop aerie.

The penthouse glitz shows as soon as you get off the elevator. Floors of marble and walls wrapped in silver-threaded paper
sparkle a welcome in the foyer. Enter the L-shaped great room, though, and the view from Point Loma to Coronado takes over.

“All the perimeter windows are ‘smart’ glass. You can change their opacity with the flick of a button,” Joan says. “Outdoor living space was important to my client, and this property has one of the largest penthouse patios I’ve ever seen.”

Because of the wind factor on the deck,  a stone-topped “fire” pit adds ambiance without heat; furniture bases are bolted down; cushions are strapped down; and hefty, custom-made daybeds lock into each other.

Inside, daybeds also provide plenty of seating for visitors.

“I had two 3 1/2-foot-wide and 6-foot-long daybeds made for the living room,” Joan says. “They are multipurpose so that you can have sleeping quarters when needed. Tables tuck under the daybeds, but they can be pulled out so people have places for drinks and food. Swivel chairs add extra seating and allow guests to look at the view or each other for conversation. It’s a comfortable space where you can seat more than 20 people.”

In the dining area of the great room, Joan devised a two-piece, L-shaped table. One part is at the standard table height of 30 inches; the other is counter height. 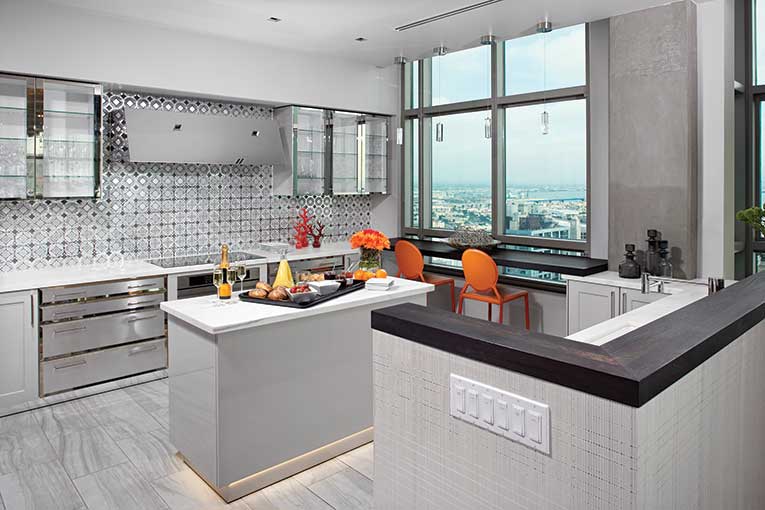 “The way the table is designed, there is a pin every 3 feet,” Joan explains. “The upper table can be moved to any pinpoint in that surface so that, just by rotating the pivot, you can create a T-shaped table; reverse the L shape; or make a straight, 17-foot-long table.”

Off the great room, a staircase that consisted of industrial-looking, black metal pipe took on a sleeker vibe when Joan redesigned it with glass panels and corrugated metal treads and risers wrapped in wenge wood. Wenge wood also encases the railing.

“I found the perfect chandelier for the staircase landing at a Las Vegas design show,” Joan says. “It was made of crystal links shaped like the letter C. But when it arrived, I opened the box and it was filled with a thousand tiny boxes that had one C-link in each box.

“That was an eye-opener. It was a whole-day project for the electricians to put the links together.”

Upstairs lies what could be referred to as the loft’s loft  — a sort of bachelor pad within a bachelor pad. With access to another extensive outdoor deck, the indoor/outdoor space’s multifunctional uses include living room, bar, home office and, with a closet and pull-down Murphy bed, a second bedroom.

The adjoining bathroom features floor-to-ceiling, ballpark-facing windows next to double sinks and the same view from windows in a corner shower. 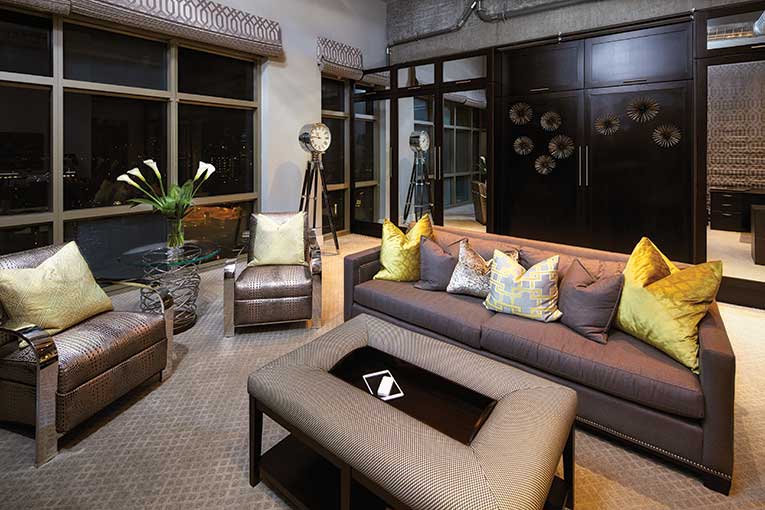 The master bedroom and bathroom are downstairs, on the other side of the back kitchen wall. Both rooms access patio space. Mirrored latticework and door fronts, white marble countertops and flooring, crushed-velvet vanity chairs that swivel and wallcovering with silver filigree create master bathroom glam.

The bedroom has a seductive fascination of its own.

“The custom bed is equivalent to two full-size beds — it’s 9 feet wide,” Joan says. “All the bedding, including the sheets, was custom done in a lightweight fabric because it is a lot to move. I used a silver-glazed linen with cotton sateen backing. The wall was tufted to act as a headboard, which will work with any size bed in the future.”

On the home’s opposite side are a powder room and laundry facilities. A custom sculptural piece, which looks like a graph to reflect the financial market in the last 10 years, hides the central pad for all the operations of the smart house.

“There were challenges — like rerouting the piping,” Joan says. “Whenever my client would add another element to the project, like projectors dropping down or huge speakers, all those things had to coordinate with the placement of pipes; and those changes had to be made as we were designing. There was no way to plan it out in advance.

“I had to do some research, because meeting the wants of my client presented waters I hadn’t been in before,” Joan says. “But that’s what keeps designing spaces fun.”