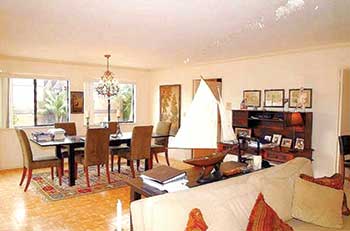 Designer Marcia Bryan derived color and accessory themes from the nearby beach and bay for a Point Loma dining room makeover. She opened the room to the kitchen, but kept it intimate.

“The style for the new space is coastal casual,” she says. “The aim for the remodel was to create a dining room that gets pulled into a conversation with the kitchen for more meaningful, open-style entertaining.”

To provide a better flow between the two spaces, she exchanged the tiny door that led into the kitchen for an expanded portal sans door. White molding, which matches new base and crown molding, frames the opening and elevates its design.

“The room has an outlook onto the bay, so I used textured woven shades that have the advantage of pulling open for a full, coastal view,” Marcia says. “Sheer linen panels frame the views beautifully without adding weight to the room. Blue trim on the panels is a nod to the horizon between ocean and sky.”

Sea fog grays and sandy taupes on chairs and a shot of blue in tabletop accessories also speak to the home’s bayside location. But the chandelier composed of recycled oyster shells and rock crystals most accentuates the landscape outside.

“Now the home reflects as much calm and steady consistency as the bay views outside,” Marcia says.