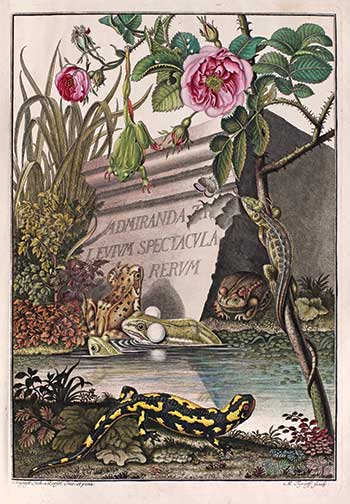 On acid-free paper, August Johann Röesel von Rosenhof hand colored a copperplate engraving of frogs, a butterfly, a salamander and a lizard enjoying a small pond surrounded by plant life, including pink roses. At 257 years old, the pigments are so vibrant that they look as if the illustration was put to paper yesterday.

“One thing that’s really important to me is for people to have the opportunity to see these books in the flesh,” Margaret says as she delicately turns the pages. “I don’t know how many digital copies are out there; it’s not the same as seeing the real thing. The real objects do speak to people in a way that gets to them.”

The public will be able to see once-tucked-away treasures like this beginning in June when the museum unveils its permanent exhibition Extraordinary Ideas from Ordinary People: A History of Citizen Science. Margaret says the exhibit essentially turns the research library “inside out,” inviting museum patrons to interact with rare books, artwork, historical photographs, field notes and maps previously kept behind closed doors and only viewable by appointment.

The creation of the special collections gallery marks a $4 million expansion for the museum, which has occupied its Balboa Park building since the 1930s. Within the museum’s footprint, Place Architecture of San Diego designed two mezzanines that expand the research library by 3,100 square feet.

The central graphic element of the new space will be a 20-foot-tall rendering of the Historia Naturalis Ranarum Nostratium frontispiece. A glass-sided staircase will ascend into the piece. Frog sculptures durable enough for children to climb will be placed in front of it, and interactive touchscreens will allow patrons to learn more about the flora and fauna the massive image depicts.

“It’s going to look gorgeous no matter how big you blow it up,” Margaret says. “It’s kind of like walking into the illustration.”

The artwork was selected for its beauty, but also because it’s so iconic of what museum officials are trying to demonstrate with the exhibition. The research library’s 56,000-volume collection was built largely through donations from generous backers like Klauber, with research work done by so-called “citizen scientists” like von Rosenhof.

“San Diego Natural History Museum was founded by amateur naturalists who wanted to know more about this place they lived in,” President and CEO Michael Hager says. “It feels to me like we’ve been accumulating all this data, just waiting for the digital age where we could get the data back out to the people. That’s what’s happening now. It’s exciting
that it worked out full circle.”

Michael has been with the museum since 1991 and will retire this year. The new gallery owes its origin to a discovery he made early in his tenure: The museum owned an entire 1,094-piece collection of original watercolor paintings of California native plants by A.R. Valentien commissioned by philanthropist Ellen Browning Scripps, but didn’t keep them in archival conditions. “I was kind of horrified,” Michael says.

Jerome and Eleanor Navarra, known locally for their family’s Jerome’s Furniture business, learned of the museum’s need to better preserve the Valentien paintings. Their sponsorship led to a traveling exhibition of the works and sparked a desire by museum officials to make the research library’s collection even more accessible. The new gallery has been named in their honor.

The Valentien paintings will now be part of the museum’s permanent display, with about 10 paintings rotating seasonally.

Creating new space for the gallery posed a logistical challenge: how to preserve antiquarian pieces while allowing light and make the space inviting while respecting the integrity of the pre-war structure.

“It needed to be a beautiful place that honors the historic building,” Michael says. 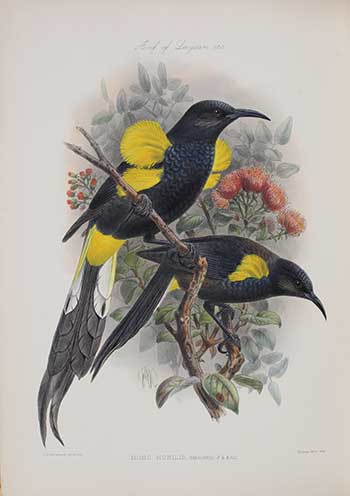 Lead Exhibit Designer Michael Field says the original building had to be modernized with new electrical wiring and climate controls, new skylights that would better filter ultraviolet rays and offer thermal insulation and precise paint colors that would be visually appealing while reflecting a suitable level of light.

“It’s really hard to do. If you think about turning a 1934 Packard into a Toyota Prius, it’s kind of what we do. You have the original concrete of the building, but everything else is the Prius,” he says. “These are rare documents that have to be kept for future generations. So all the display cases, all our heating and air conditioning, had to be upgraded. It’s a big task.”

The exhibit’s design team is even working to build custom maple tables and book rests to reduce strain on the bindings of heavy, rare books like the Bien Edition of John James Audubon’s Birds of America. It contains life-size illustrations of more than 100 birds; when open, the book is almost 5 feet wide.

Place Architecture took one of the project’s structural needs as an opportunity to create an artistic focal point for the gallery: A system of steel rods that bear the weight of the mezzanines resembles thatched reeds.

The special collections gallery is being designed with the modern museum-goer in mind. Displays will be big, touchable and interactive.

“We’re creating an attraction, making it special to completely shatter the notion of the library being a somber experience,” Michael Field says.

The wide availability of online research has brought natural science back to a time when anyone can participate, regardless of formal training, Margaret notes.

“These are all connections we want to help people make to bring these books to life,” Michael Hager says. “There’s a lot of knowledge contained in these older books that applies to the present. You only find them by honoring, respecting and wanting to reread them and look at them with new eyes.”