Beer need not be a loner; team it with other ingredients to give your brew cocktail status

Quick, what drink goes with football?

Chances are good that most San Diegans would answer, “Beer!” But maybe it’s time to kick it up.

“The abundance of flavor profiles found in some of our local brews are enhanced by fine spirits and fresh modifiers,” attests David Cohn, whose Draft Republic restaurant makes his favorite beer cocktail: The Declaration. Served tall and cold, it’s a mix of gin, elderflower syrup, lemon juice and Sharkinator White IPA from Lost Coast Brewery.

Draft Republic’s The Amendment starts with a mix of vodka, fresh lemon juice and grapefruit liqueur. Then the glass gets filled with St. Archer Blonde Ale and garnished with an orange peel. The Referendum stokes your senses with the slightly spiced tones of Captain Morgan’s rum. Add a splash of Ancho Reyes chile liqueur, lime juice, Castaway Coconut Porter from Thorn St. Brewery and a slapped (slightly bruised) sprig of mint.

“The best marriage in a beer cocktail comes from reducing the amount of spirit to create balance and avoid an aggressive profile,” says Sarah Ellis, general manager of Sycamore Den. Created by bartender David Kinsey, Prince Charles Don’t Surf is a noble drink with a splash of gin and rising almond notes from orgeat syrup, a dash of Angostura allspice bitters, lemon zest and St. Archer Blonde Ale.

While in Scotland as a teen, Sarah joined her grandmother at the village pub to sip shandies in elegant glasses. Traditionally, a shandy is made with equal parts of soda and beer. Sycamore Den has upped the game with a version made strong to match Sarah’s memory. The Turnbull Tipple comes with a strawberry perched on the rim of the glass and another muddled inside. They complement a blend of Scotch, lemon juice, ginger syrup and hard cider.

Small Bar’s Capri Mule starts with icy ginger beer in a copper mug. A slice of fresh ginger with a triumvirate of peach vodka, peach bitters and Crème de Peches liqueur are combined before the addition of a bit of Stiegl Radler Grapefruit beer.

Erick Castro, proprietor of Polite Provisions, was inspired by his first sip of AleSmith Brewing Co.’s Speedway Stout to create Dublin Iced Coffee. The stout is brewed with roasted coffee. Erick stirs it with cold brew coffee, Irish whiskey and simple syrup. Then he pours the mixture over ice in a Collins glass, floats cream on top and adds a grating of fresh cinnamon.

The rookie in the beer cocktail playoff is the new rooftop bar The Nolen, above the Courtyard by Marriot in the Gaslamp District. The bar menu features barrel-aged and draft cocktails with spirits from locals Ballast Point Brewing & Spirits and Malahat Spirits Co., in addition to craft distilleries around the globe.

Put vodka, lemon juice and grapefruit liqueur into a cocktail shaker. Shake and strain into a snifter glass. Top with beer
and garnish with an orange peel.

Put white rum, orgeat syrup, lime juice, pineapple juice and a few ice cubes into a cocktail shaker. Shake and strain into a bucket glass filled with crushed ice. Top with beers. Add a float of dark rum reduction. Using a straw, create a small hole in the ice. Group 10 to 12 mint leaves together and insert stems into the hole.

*Pour a 750 ml. bottle of Goslings dark rum into a saucepan and bring to a boil. Add a cup of brown sugar, stirring until dissolved. Lower heat and simmer until reduced by
a third. 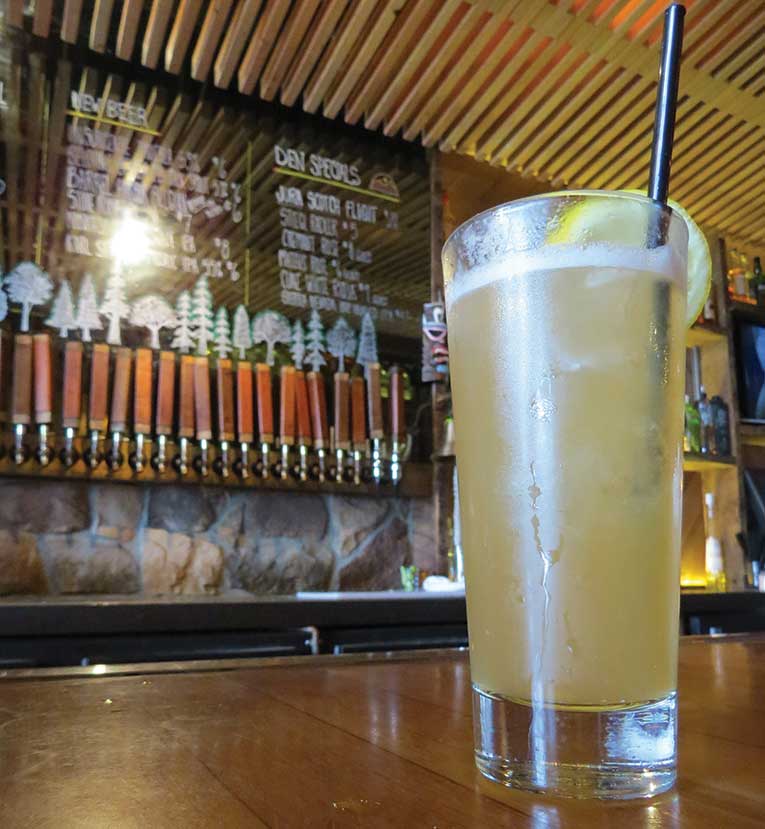 Put gin, syrup, lemon juice and bitters into a cocktail shaker with three ice cubes. Shake and strain into a Collins glass with ice. Top with beer and garnish with lemon zest.

Combine Scotch, lemon juice and ginger syrup in a cocktail shaker with ice. Shake and strain into an ice-filled glass. Top with cider and garnish with a strawberry on the rim of the glass.

*Put ginger root in a juicer. Strain the juice and blend with sugar in a ratio of two parts juice to three parts sugar. 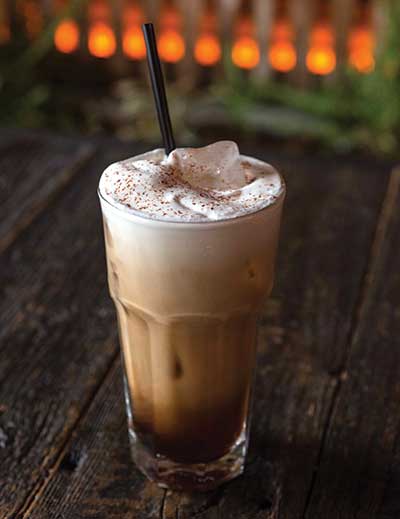 Combine first four ingredients and pour over ice in a Collins glass. Float a dollop of cream on top and garnish with cinnamon.