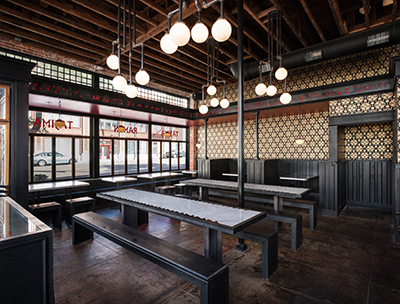 Yet it seems he can work some makeover magic, too. His short-lived Acme Southern Kitchen has been scrapped for an entirely different concept: ramen shop Tajima East Village.

As designer and partner on Tajima Restaurants’ fourth San Diego location, Basile has reworked the restaurant on the corner of E Street and Ninth Avenue to be darker, more sophisticated and more reflective of the Tajima brand than the space’s previous Southern-style incarnation.

“When we did the refresh, it was an easy conversion, because it didn’t really scream ‘Southern,’” Paul says. “I think the space reads more about Tajima than it ever did as Southern.”

Paul replaced chicken-motif wallpaper with Bradbury & Bradbury’s new Japanese-style wallpaper, a floral design in ebony and gold called Kunio. Wooden spindles around the top of the dining room have been supplanted by sheet metal backed with red acrylic then backlit. The design cut into the sheet metal is representative of Japanese brushstrokes.

Paul swapped out a handful of individual tables for long tables with benches that can seat many, reflecting the communal-dining style of Tajima’s other locations. The tables are a byproduct of his shop’s experimentation in marble, as seen more extensively at his new vegan restaurant, Kindred.

The long tables at Tajima East Village are made of white marble and burnt cedar, hand filed and puzzled together in a sawtooth design. The wood was blackened with a blowtorch.

Paul kept many of his favorite design elements from Acme, including exposed brick, an open-beam ceiling, light fixtures crafted from gas pipes and vintage globes, and a stainless steel-clad kitchen visible to the dining room.

Paul is respecting the history and integrity of the old East Village building, constructed in 1927.

“We never try to put a square into a round hole,” he says.