The play is not the only thing; creative ideas expand the experience beyond the performance

Never mind what Hamlet said. These days, theaters across the country are scrambling to attract younger audiences, and local companies are coming up with imaginative ways to encourage new attendees and enhance the theater experience.

The Old Globe offers social media trivia quizzes to challenge Facebook and Instagram visitors with information related to a show they’ve recently seen, a cocktail party for LGBT attendees prior to select productions, sensory-friendly performances for families of those on the autism spectrum and a free student matinee series.

The Globe also offers informational events, including Shakespeare in the Garden seminars; Insights seminars with non-acting individuals tied to a play; post-show forums; and Subject Matters, in which an expert from a non-theater field talks about a specific production. For George Bernard Shaw’s Arms and the Man, in which chocolate featured prominently, a chocolatier was the guest speaker.

“Each play presents different opportunities: a panel discussion, a lobby display, an expert, a film screening,” Artistic Director Barry Edelstein says. “I especially love the In Conversation series, when I get to sit down and ‘Charlie Rose’ some luminary like Nathan Englander [who adapted his short story The Twenty-Seventh Man into a play produced at the Globe] or [Shakespearean scholar] James Shapiro.”

Also a Shakespeare specialist, Barry has repeatedly presented his popular talk/demonstration Thinking Shakespeare Live, an exploration of the Bard’s language.

La Jolla Playhouse is a recent recipient of two grants that are intended, Artistic Director Christopher Ashley says, “to develop projects that explore multi-ethnic perspectives and increase the diversity of our audiences.” One grant enabled the playhouse to launch a military outreach initiative. For the first Military Night last July, members of Wounded Warriors attended an exclusive performance of the world-premiere musical Come From Away.

Foodie Friday events at the playhouse include food trucks on-site and free beer tastings. The playhouse hosts audience-engagement activities for every production, including pre-performance “insider’s views” of a production and post-production discussions with guest speakers about the issues presented in a play.

The playhouse also relishes taking theater outside the confines of its buildings with its Without Walls series, featuring performances staged in spaces from a martini bar to a basketball court. 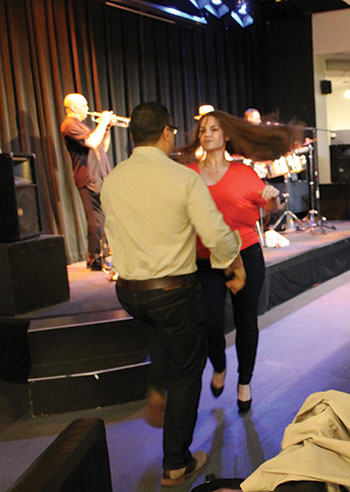 A martini tasting accompanied Cygnet Theatre’s production of two Noël Coward plays. Specialty martinis were crafted by Martinis Above Fourth: a light and sweet drink to go along with the fizzy Hay Fever and a dark, strong martini designed with The Vortex in mind.

Cygnet provides a wide array of engagement offerings: pre-show wine, beer and tequila tastings; pre-show concerts; pre-show LGBT mixers; and non-show night forums with the creative staff. One successful event was Girls Night Out, paired with the production of My Fair Lady, for which a local boutique provided pre-show shopping, mimosas and a gift bag. These activities and events, along with nonprofit partnerships, have contributed to a 14 percent increase in Cygnet’s ticket sales in the past year.

This spring, in association with The Rocky Horror Show, Cygnet will hold pre- and post-performance blood drives, and a Bring a Virgin night, encouraging regulars to invite a Cygnet newbie.

The intention, Managing Director Larry Aldredge says, is “to make the experience of coming to a Rep show start before one enters the theater and stretch on after they leave.”

Rep Your Pride events create a forum for members of the LGBT community to discuss issues related to a play. Amigos del Rep hosts a Latino-themed event during every production.

In association with this spring’s production of R. Buckminster Fuller: The History and Mystery of the Universe, the Rep will present pre-show conversations with a start-up specialist, an inventor, a futurist and a member of the Fuller family.

“Varying the program like this draws in patrons looking for something a little different,” says Producing Artistic Director Robert Smyth.

For Lamb’s Players’ long-running musical revue MiXtape, Friday nights are ’80s nights, with a free beverage for anyone dressed in the style of that decade.

Diversionary Theatre, the third-oldest continuously producing LGBT theater in the country, hosts pre-show Backstage Thursday events, featuring complimentary hors d’oeuvres and a specific production focus — a spotlight on the stage design or an opportunity to meet the cast and director. Thursdays have become the theater’s best-selling night.

Diversionary’s Sneak-a-Peek events for donors and subscribers offer a free reception, a look at the stage design plans for an upcoming production and an excerpt from it. The quarterly Big Gay Improv Show uses the life stories of community leaders as a basis for improvisation.

As the Globe’s Barry Edelstein puts it, “The idea is that we want to do more than simply present shows. We want to make a case for theater as an enriching, rewarding, fun and even civilizing force.”