37th Homes of the Year: Kim Grant and Jon Walsh – In the Spirit

Excited by the possibilities of living next door to Balboa Park in a home within walking distance to everything a city has to offer and egged on by the “for sale” sign out front, Paula and Milan Cronovich peered through the windows of a historically designated residence.

Plywood walls and flooring; random, old windows pinned into openings as temporary closures; open framing; unfinished wiring; and a haphazardly built, covered porch with unstable flooring signaled that this must be a ghost house.

“Paula’s mom went in through the back and opened the front door for us,” Milan says. “We thought that no one could possibly live there; it was
in such a state of disarray.”

But two people still occupied the residence and, much to the chagrin of Paula and Milan, one of the owners was home. 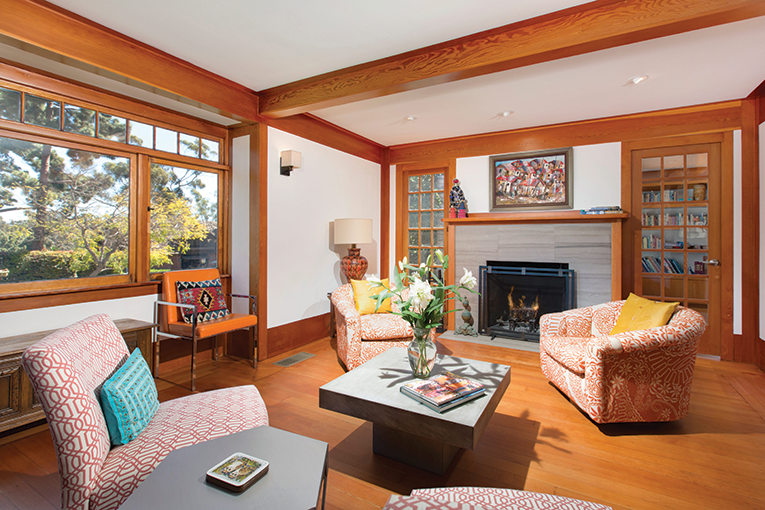 “We were mortified, but he was great,” Milan says. “He and his partner had lived there since 1995. He told us the history of the house and how it came to be in such a condition.”

Built in 1905 by Irving Gill, the home was in the middle of a restoration project that came to a sudden halt because of a lawsuit. For 13 years, the residents camped out in their partially demolished, historical house. Then one got a job in Los Angeles and the home was sold to Paula and Milan, who wanted to honor its heritage.

Hiring architect Kim Grant and contractor Jon Walsh helped achieve a redo sensitive to the architecture while harmonizing with Paula and Milan’s desire to contemporize the home.

“This was Gill’s take on Prairie style, which was modern at the time the house was built,” Kim says. “Some design features, like the woodwork and eaves, were horizontally carried out. That worked well with Paula and Milan’s taste for Mid-century Modern. Even today the old house feels fresh, because it has a modern take.” 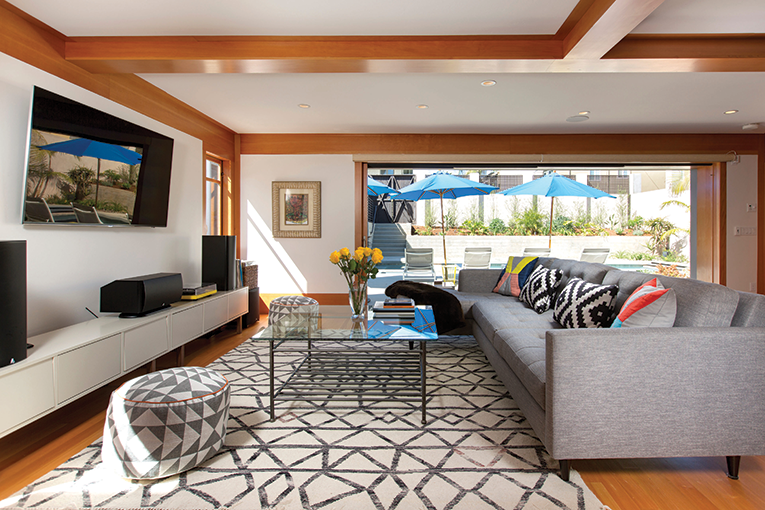 The front door, entry hall, living room and library had been preserved. The library originally was a porch that was possibly enclosed during a 1922 remodel by Irving Gill’s nephew, Louis. In these areas, existing Douglas fir flooring, the architect’s signature flush-edged trim work and hallmark thin walls were in place but needed to be refinished. “Gill’s walls were 2 1/2 inches thick,”

Jon explains, noting that walls have to be 4 1/2 inches thick to meet today’s standards. “Where woodwork had to be replicated, we joined pieces in such a manner that they were flush, sanded smooth and looked like they were hewn from one block of wood.”

Gill wasn’t the only one who had design trademarks. It seems his drafter, Hazel Waterman, had a calling card too. Her pur-ported lack of ability to calculate figures for stairwells limited clearance for doors. Hence, when sitting in the library, looking north through the hallway, the 6-foot-4-inch front door looks Hobbit size or, as Kim puts it, “cozy.”

The far west end of the house was completely demolished, but had been a kitchen, dining room and bedroom — all closed off from each other. Paula and Milan decided to open up the area for a great room and “go as modern as we could, while still honoring Gill’s style,” Paula says. “You see these really old homes in Europe with modern kitchens and bathrooms, which I think look fantastic. So I knew it would look great.” 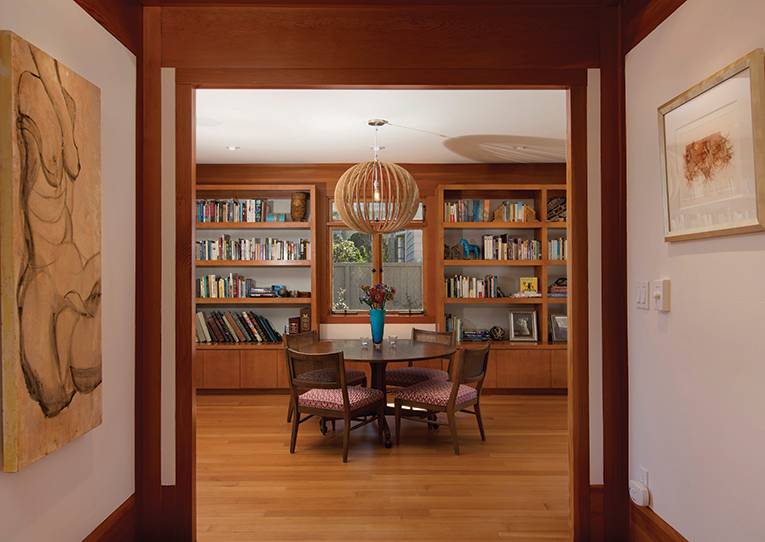 In the kitchen, Siematic cabinets in light gray are sleek and shiny. For a more organic look, the island has a slab of natural stone in a corresponding gray. The muted colors showcase the bright yellow Bertazzoni range.

“We kept the original brick chimney that went to the original stove,” Milan says. “The juxtaposition of marrying something very old with what’s new created something really neat.”

To the north of the great room, a concrete slab that acted as a porch was turned into an enclosed playroom for Paula and Milan’s son, a laundry room and a downstairs bath-room with a shower in close proximity to the pool.

“We added 10 square feet to the back of the house, which created part of the great room,” Kim says. “We basically cleared out all the walls of the kitchen, family and dining rooms and gave it a nice indoor/outdoor connection with huge pocket doors leading out to the pool.”

Behind the pool and along the side yard, board-formed concrete walls provide rugged texture. French doors in the great room and in the library lead to the side yard’s dining terrace, where a passion fruit vine grows along a pergola that mimics the one by the front door.

“Because of the historic designation, we had to rebuild that pergola to the exact specifications of when Gill designed and built the house,” Jon says. “We had to ac-quire larger pieces of wood and then cut them down to the exact dimensions that Gill had used.” 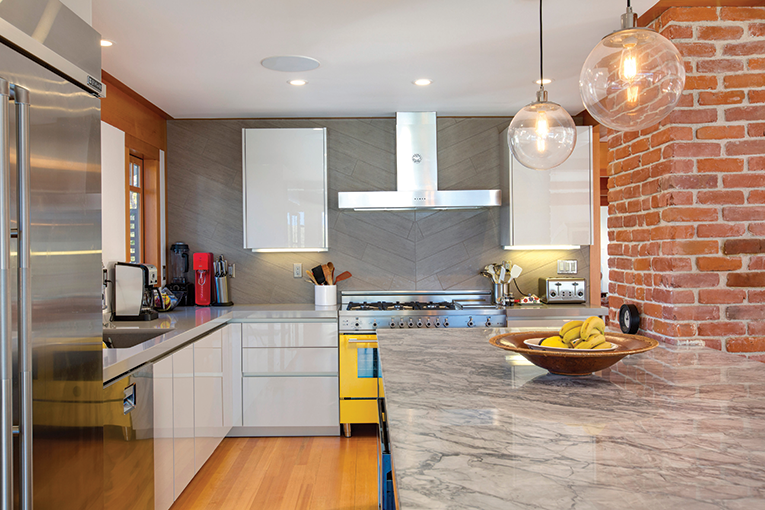 Back inside and up the stairs, two bed-rooms (where the previous owners had holed up while the home was partially demolished) are intact with all the original trim work, floors, windows and step-up closets. An open-air sleeping porch at the end of the hall, with an odd bathroom added in later years, became a glass-enclosed sunroom that Paula uses as an office.

“There’s also a cavernous master bed-room upstairs, which we structurally improved with a vaulted ceiling that goes up about 12 feet,” Milan says. “There’s an enormous terrace that looks out over the pool, which was the result of the addition and not being able to change the roofline. Originally, Gill had planned a large master terrace along the back of the house. It was never built, so we were able to realize it for him.”

Also on view from the master bedroom is the new two-story guesthouse and office that has the cubist characteristics of Gill’s later work.

The home retains its historic designa-tion, but has a fresh design to double its functional life.

“Throughout the project, we all discussed the irony of simultaneously modernizing and preserving the home,” Jon says. “If anyone could appreciate the efforts to bring a 110-year-old design into sync with a new, modern era, it would be the oft-considered father of architectural modernism, Irving Gill.” ❖