With the notion to move from Orange County to San Diego County, Marcia and David narrowed down their locale choices to the Baywood Collection in Santaluz and Cielo in Rancho Santa Fe.

They liked the casual Tuscan farm-house design of the former and the hillside topography of the latter.

“We ended up with a little more villa exterior, but we really like Cielo,” Marcia says of their 6,700-square-foot custom home with expansive canyon views on the north side of the acre-plus property. 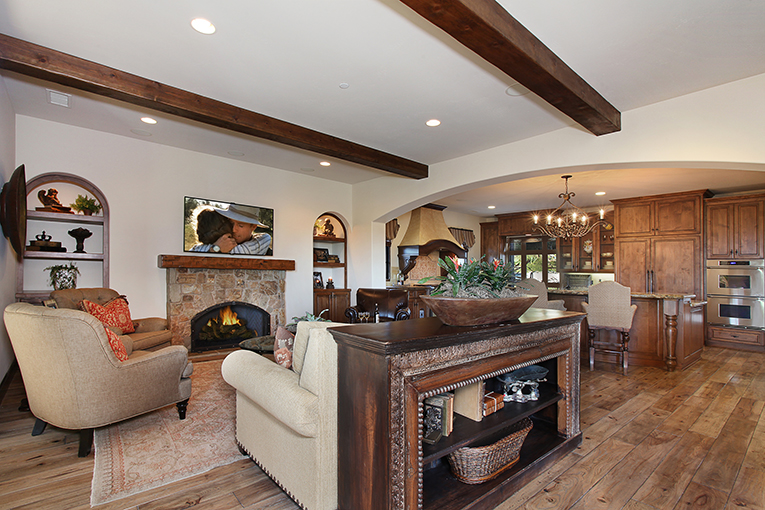 After interviewing several contractors, they chose Kendall Carpenter, who, in turn, referred the couple to architect Josh Eckle. Interior designer Denise Hamilton of Rancho Santa Margarita entered the picture after a suggestion by one of Marcia and David’s daughters.

“Our daughters went to high school together,” Marcia explains. “My daughter said, ‘You should see Denise’s house. Maybe you should have her do yours.’”

The home’s exterior combines smooth-troweled stucco and stone veneer under a clay-tile roof. Marcia and David wanted most of the house, including the master suite, to be on one level. To achieve the Tuscan villa design favored by Cielo, Josh made the center core almost as high as the two-story wing that accommodates bedrooms with en suite baths for the couple’s daughters. 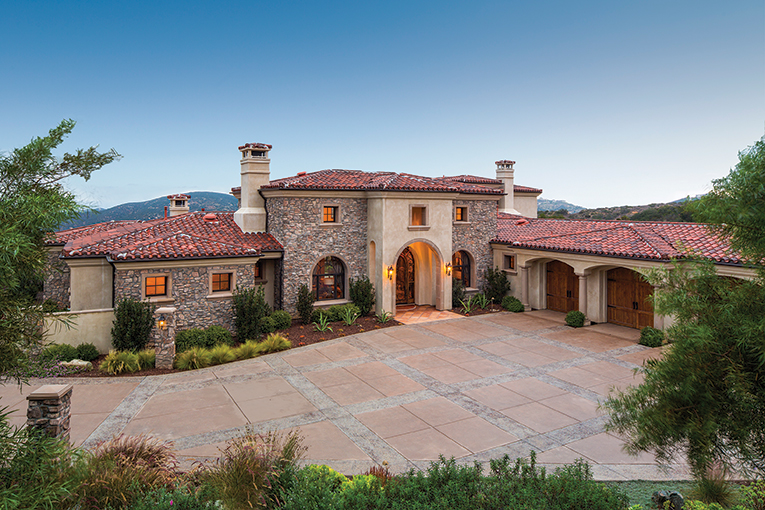 “One of the main challenges to success-fully designing this residence was dealing with the potential eyesore of the Olivenhain Reservoir dam,” Josh says, noting the subtle rotation of the house on the lot. “By turning a shoulder, so to speak, to the dam and facing the back of the two-story structure toward its direction, we minimized the visual impact of the dam. When you are in the house, you have no view of it. Before the house was built, that’s clearly what you saw with the orientation of the lot.”

In fact, the center of the arched front door aligns with the fire pit, pool and spa in the back yard, drawing the eye out across the canyon to distant hills.

One enters the house in the middle of a great room with a living area to the left and dining to the right. The ceiling height of 18 feet could make the space feel overwhelmingly voluminous if not for the homey warmth of hand-hewn hickory flooring with a gray wash finish; hand-knotted area rugs finished with an antique wash; a trio of wrought-iron chandeliers; and deft scaling of architectural details
and furnishings.

For example, the travertine façade of the fireplace stops below the ceiling, which helps keep the room grounded. 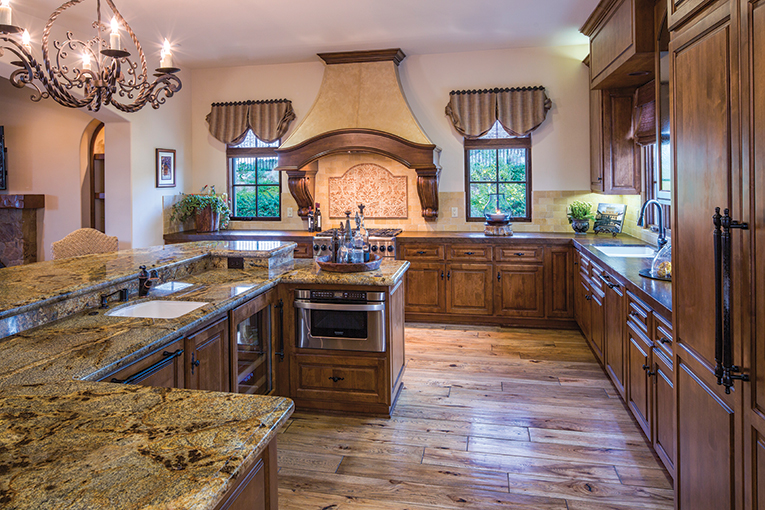 “I wanted a material for the fireplace that would carry your eye into the natural surroundings of the back yard,” Denise says. “We used an earthy travertine and had the slabs leathered and cut into blocks.” An arched molding over the firebox mirrors the arched niche, doors, windows and passages to other areas of the house.

To accommodate his clients’ desire for a primarily one-story floor plan, Josh designed the house with only two bedrooms — one for each daughter — on the upper level. Under those rooms on the main floor are guest rooms. A game room on the back end of the wing “allows the architecture to step down, so you don’t have an immediate two-story face,” Josh says.

From the great room, an arched passage that reveals a niche showcasing a twisted hunk of driftwood leads to a short hallway that ends with a powder room. A set of double doors opens to the master suite that occupies the entire west wing of the house. The bedroom offers a view of the canyon and hills beyond through a window in a dedicated sitting/reading area. A rounded, smooth stucco fireplace with a custom carved mantel complements the softly curved arches of the sitting alcove.

A passageway on the east end of the great room leads to a short hallway lined with a stone veneer and a barrel ceiling lined with strips of concrete made to look like clay bricks (the same material used for floors in the laundry room, game room and guest bedrooms). On one side of the hallway, a door with a wrought iron vine over glass provides a view into the wine room, which has the same stone veneer on the walls, but has a stamped-tin ceiling with a warm bronze finish. 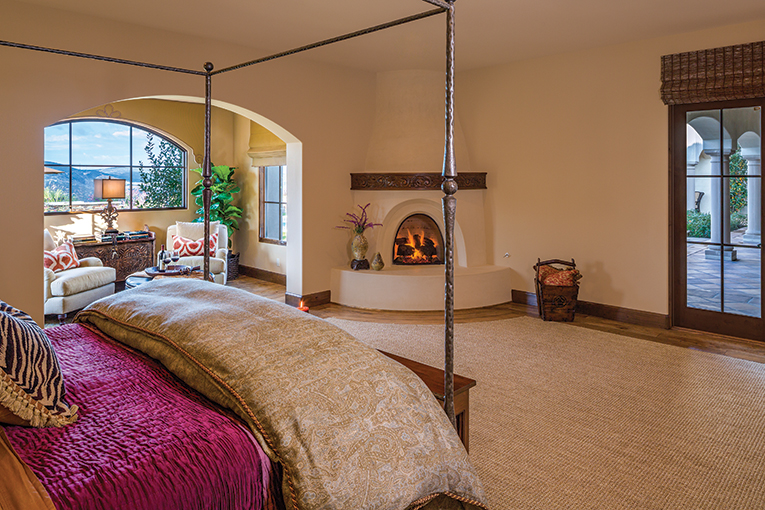 Just beyond lies an open space accommodating the family room and kitchen, separated only by a large kitchen island/bar.

“We wanted a really big bar and comfortable barstools,” Marcia says. “In our previous house, everyone would hang out
in the kitchen.”

“The buffet was designed to emulate a piece of furniture that looked like something out of the past,” Denise says. Patterned, relief tiles on the back wall of the buffet and behind the stovetop on the opposite wall create focal points in a soft green and warm terra cotta combination.

In a similar fashion, Denise injected personality into the area marking the beginning of the northeast wing: The wall that is visible from the kitchen and family room gets a boost from a hanging of abaca-wrapped spears; while patterned tiles cover every other riser of the staircase to the daughters’ bedrooms. 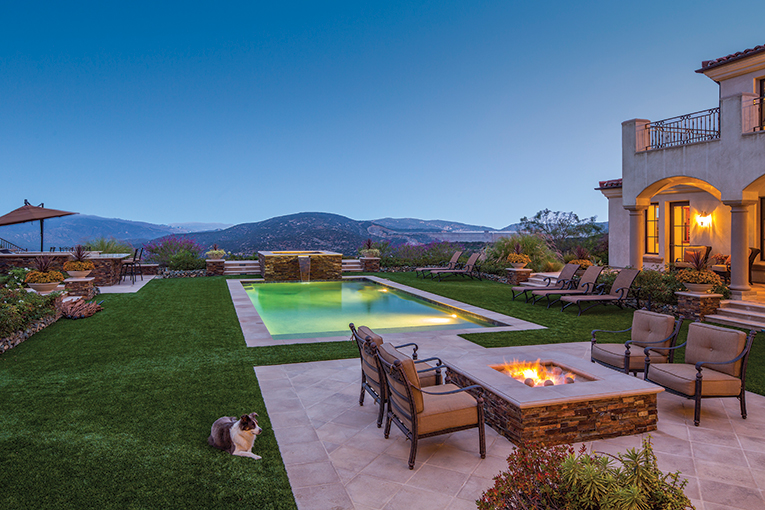 The second-story bedrooms share a balcony centered around an alcove with a spiral staircase.

“We wanted each space in the house to have access to the pool area,” Josh says. That means doors leading outside from all five bedrooms, the game room, the family room and the great room, which has three sets of double doors.

The core-and-wing architecture of the house gives the back yard something of a courtyard feel. Artificial turf (for the dog’s benefit) surrounds the pool. An outdoor grill station sits in a far corner.

“We are not big on barbecuing, so we put it at the end of the yard,” Marcia says. “It looks back on the house instead of being up against it.

“We sit out here quite a bit on the covered patio and near the fire pit,” she continues. “It’s always very peaceful. In Orange County, we were on a cul de sac that backed up to the Cleveland National Forest. One of the things we wanted was to maintain the quietness.”