Putting it All Together

After “I do”s in front of a justice of the peace, Mary Ann Stepnowsky and Tom Clark repeated their vows a year later before friends and family gathered in their back yard. Pictures show the bride and groom on a patch of lawn framed by the mountain vistas that enchanted them when they first visited the modern ranch perched high above El Cajon.

Both envisioned major changes to the steeply sloped, 3/4-acre property they purchased shortly after their 2003 wedding. Mary Ann, who grew up on a potato farm in Long Island, N.Y., was eager “to get back to working in the dirt” of a dynamic dry garden. An avid golfer, Tom wanted a putting green, as well as better passage around the property.

Though neither realized it at the time, they would celebrate their 10th anniversary before the new landscape was ready for planting. Full-time management jobs (Tom as a fire chief and Mary Ann as a city analyst) and outdoor adventures around the country ate into their work on pesky erosion problems, a deck redo and the removal of a pond choked by ash when the Cedar Fire roared nearby.

Over the years, Tom drew on his exper-ience as a licensed contractor to sculpt the back yard into walled terraces and planting beds, engineer broad stairs and ramps down slope, and craft the elegant mangaris wood deck that spans the rear of the home. Stucco walls and curtains of bamboo added privacy. Tom created a new destination for relaxing when he erected a gazebo with a swing built for two. 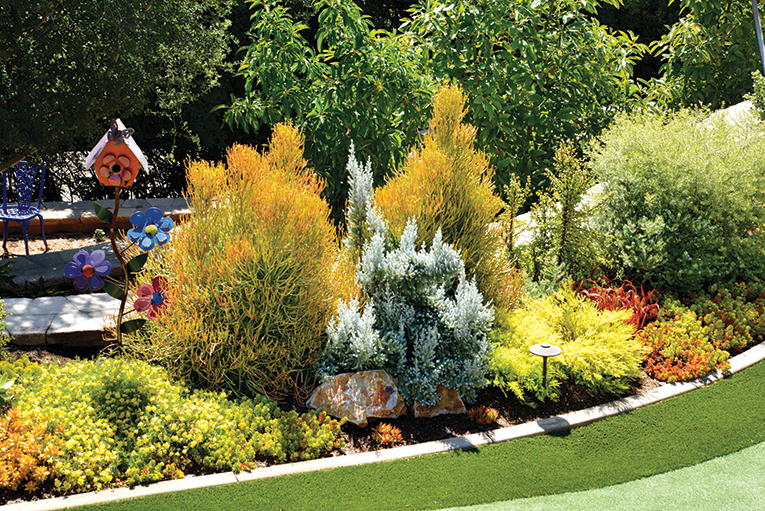 “The design for the hardscape was all in Tom’s head,” Mary Ann says. “I never saw a plan or blueprint. I just trusted in the process.” During construction, Mary Ann satisfied her gardening desire by serving as a docent at the nearby Water Conservation Garden.

“I was one of the ‘dirty docents’ who got their hands in the earth, which was perfect for me,” she says. “I also learned what worked in gardens here.”

Two years ago, during a chance visit to Gardens by the Sea in Leucadia, Mary Ann was smitten by owner Mike Hirsch’s displays. One especially caught her eye: a dramatic ‘Hercules’ tree aloe accented with driftwood similar to pieces she and Tom collected on a Santa Cruz trip. “I fell in love with it,” she says.

Mike’s handiwork glows in the undulating bed around the four-hole, artificial-turf putting green that dominates the largest terrace. Bold plants — including a ‘Hercules’ aloe, dragon tree and ‘Sticks on Fire’ euphorbia — punctuate a tapestry of ground-hugging succulents, many in fiery shades of gold, yellow and red.

He designed bed and container plantings that more than satisfied the couple’s desire for color, textures and scent. 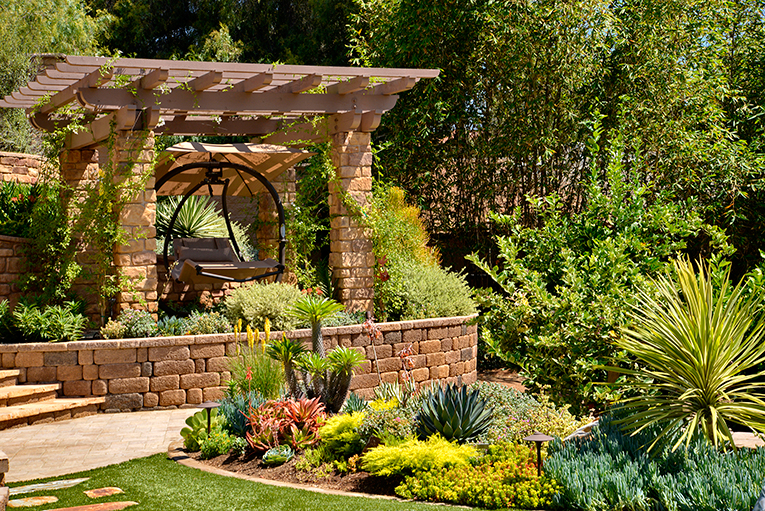 “He also gave us something blooming every month,” Mary Ann says. “He didn’t tell us that. We discovered it as we walked around the garden.”

“We found a way to display the branches upright rather than on the ground,” Mary Ann says. “Sometimes they look like animals in motion.”

Beds near and on the deck planted with roses, jasmine and ‘Black Tulip’ magnolias waft fragrance across outdoor seating and dining areas where the couple has celebrated milestone birthdays, as well as eye-popping moonrises.

Lower terraces are growing grounds for a dozen avocado, citrus, nut and apple trees, as well as a flourishing oak that survived a move during the landscape renovation. Raised beds of beets, broccoli, kale and other veggies also flourish here.

Now retired, Tom has plenty of time to sink putts on the green, while Mary Ann heads to the garden mornings and evenings.
“I wanted a garden where I could get my hands in the dirt,” she says. “This one is all
I imagined — and more.”