Some people love their neighbor-hood so much that they simply don’t want to leave. That was the case for Ted Schwarz and Josie Juncal Schwarz, who needed more space for three teenage boys, but wanted to remain in their Carlsbad neighborhood adjacent to the Omni La Costa Champions Golf Course.

“This whole neighborhood is having a renaissance, because all these houses have big lots,” Ted says.

The couple stumbled upon a 1970s Spanish-style home down the street from their house. Dated faux finishes, terra cotta tiles, a tiny kitchen and overgrown plants in front and back suppressed any charm the foreclosed property may have had. But they couldn’t resist the location overlooking the second hole on the golf course and the fact that it had four bedrooms with en suite baths.

Embarking on a nine-month remodel with European Touch, they quickly trans-formed the one-story ranch home into a 5,500-square-foot, two-story, modern oasis. They gutted the interior to create bright, open and airy spaces for showcasing their extensive collection of modern art and furniture.

“Ted is an art collector, so we loved the wall space,” Josie says. Two pieces painted by her father — well-known local artist Ron Juncal — hang in the foyer, as do works that Ted and Josie collected while traveling in Italy and New Zealand.

To showcase their art, Ted and Josie painted the previously yellow walls in bright white and replaced Saltillo flooring with 12-by 24-inch, honed limestone tiles to enhance the contemporary feel.

Whimsical touches abound throughout the house, including a stainless steel table with cowhide on top and a sculpture by Theodor Seuss Geisel (aka Dr. Seuss). “We like to be a little tongue-in-cheek,” Josie says. “You don’t want to take yourself too seriously.”

A sunken living room with a wall of windows brings in an abundance of natural light. High-quality designer furniture decorates the room, including a Stark rug, Corbeau lounge and Eames chair. A stainless steel surround and walnut wood panels modernized the white brick fireplace. 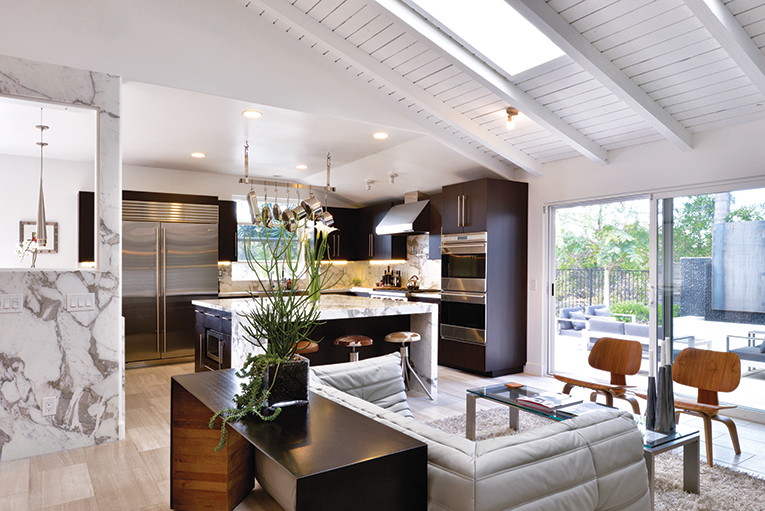 The original kitchen was enclosed with one small window where the back of the stove is now. By demolishing the walls, they opened the kitchen up to a great room and added a kitchen island, espresso cabinets and Calacatta Oro marble countertops.

“We thought the stone was very ornate, so we wanted simple cabinets to let the stone be the real feature of the kitchen,” Ted says.

The formal dining area features a table made from recycled peroba and mahogany woods.

“We wanted to modernize it a little bit, so we switched out the wood chairs with an Italian style in chrome and leather,” Ted says. They completed the look with a crystal light fixture. “I just love the juxtaposition of the crystals with the metal,” Josie says.

Ted designed a glass wine cabinet that holds almost 500 bottles for displaying his collection. Because the labels are displayed horizontally, he says, “It looks like art.”

“We like to entertain,” he continues. “If we open up all the doors, we can move people around. When we have dinner par-ties, Josie sets up tables here and we can seat 30 to 35 people.”

The outdoor living room has seating around a custom fireplace that combines concrete, steel and river rock. A fountain flows behind it.

The master bedroom/bathroom suite originally was a small, skinny room with sliding doors that opened up to an unkempt orchard. They expanded the bedroom out, raised the ceiling from 7 to 9 feet and added a fireplace and computer station. 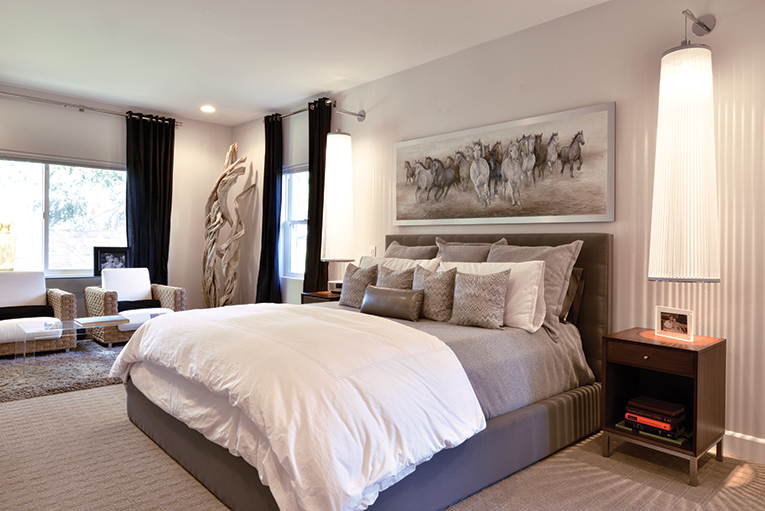 The modern décor features a bedframe dressed with Missoni bedding. Art pieces add a personal touch, including a natural beech-wood sculpture from Thailand and a stainless steel painting with a horse motif by Josie’s father. “I rode horses growing up,” Josie notes.

All of the original bathrooms were remodeled with new fixtures. The master bath was completely gutted and redressed with slabs of Carrara marble to make it brighter and whiter.

“It’s great that the house is sectioned into two parts,” Ted says. “You have the master suite on one side and three bed-rooms on the other, all with their own bath.”

The second-story addition provides a recreation room above the boys’ bedrooms with game tables, a television, a kitchenette and balcony overlooking the pool. It also has a spare bedroom/bathroom, so the upper floor can serve as guest quarters.
The home flows seamlessly to outdoor spaces. The highlight is a saltwater pool, remodeled to include a hot tub, travertine coping and travertine fountains.

“It’s kind of like living in a resort, because you come outside and you don’t want to leave,” Ted says.

With the boys outside most of the time, Ted and Josie wanted to add an outdoor kitchen and barbecue area for entertaining. They also created strategically placed seating areas with modern outdoor furniture. 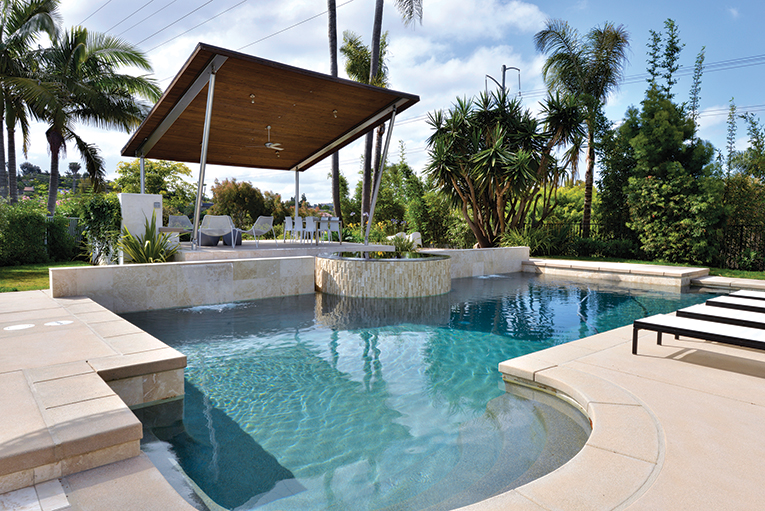 The couple got much of their design inspiration from magazines, including the idea to build a shade structure from steel and tongue-in-groove oak stained in dark maple.

“It was a little bit different than the original, but we adjusted it to fit our space,” Ted says. “Our landscaper figured it out and had it custom built for the house.”

They replaced most of the lawn with travertine hardscape and drought-tolerant plants. They also installed a bocce ball court overlooking the golf course, near a relaxation spot in the shade for their morning coffee.

“We travel constantly for work and pleasure. I love it when we come home and Josie says, ‘I just love it here,’” Ted remarks. “Where are we going to go and what are we going to do that is better than this?”