Color and angles imbue a custom home in Coronado with flair

Janie Pollok’s kindergarten teacher would be thrilled to know the role she played in Janie and her husband Jon’s Coronado home.

“She said, ‘When you get dressed on a rainy day, you should wear bright colors, because it will make you happy,’” Janie says. “She was the most special teacher in my life, and she loved color. So I always try to live with color.”

If the compelling architecture of the house comprises its heart, Janie’s innate grasp of color and pattern pumps blood through its veins. A professional painter, she knows how to successfully layer hues and textures. Jon recognizes that this is her forte, and she recognizes his strengths as an engineer.

“She’s one side of the brain, and I’m the other,” he says. “But we are not so far apart that we can’t meet in the middle.

“Janie cuts out pictures from magazines, and I deal with blueprints,” Jon continues. “She has the taste. She comes up with ideas for how to make it look great, and I look at the physicality of it and figure out how to make it work.” 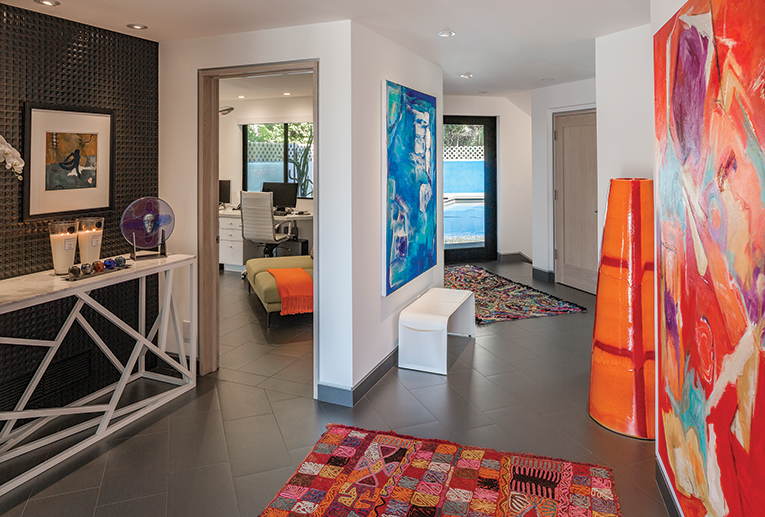 Together, they collaborated to create a home that exudes their personalities.

Twenty-five years ago, they built a con-temporary house in Houston, their other city of residence. This year, they marked their 16th summer in Coronado.

While they were living at Coronado Shores, Janie painted twice a week in a cooperative studio. One day she learned a fellow artist there also lived in Coronado and was a real estate agent.

“I said, ‘If you ever find a property near the ocean that can be torn down, I would love for you to call me.’ She called two days later,” Janie remembers, adding that the property already had an offer on it. She and Jon put in a backup bid, but didn’t get the house — until the original deal fell apart, which would please any romantic.

“We really wanted this property because we wanted it,” Jon says. “The other buyers were going to flip it. 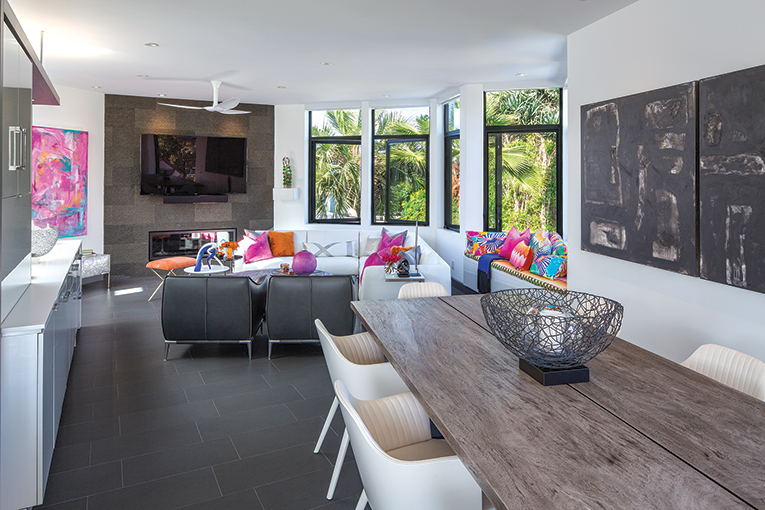 “This was part of the Sharp estate [of Sharp Hospital renown], pre-World War II, and it became a hospital for vets,” he says. “When they carved up the estate and sold off the parcels, it made this an unusually shaped lot, narrower in back, but long.”

For their architect, they chose Robert Priefer, who lives in Idyllwild but designed another house in Coronado. One of the most intriguing aspects of his design is the abundance of unexpected angles. The other highlight is the Louvreesque pyramid skylight adjacent to the rooftop deck.

“I love light,” Robert says. “That was the most important thing to me. That pyramid skylight was the centerpiece of the house.”

“I wanted a glass elevator,” Jon explains. “We couldn’t do that because of the mechanics, so I said, ‘OK, can I have a glass roof on it?’ We settled for the stairwell wrapping around the [elevator] core, but stopping under the skylight. It provides wonderful light for the kitchen, dining room, stairwell and powder room. The only problem was the light showed every imperfection in the sheetrock.” One night, Janie decided to take the project on herself. 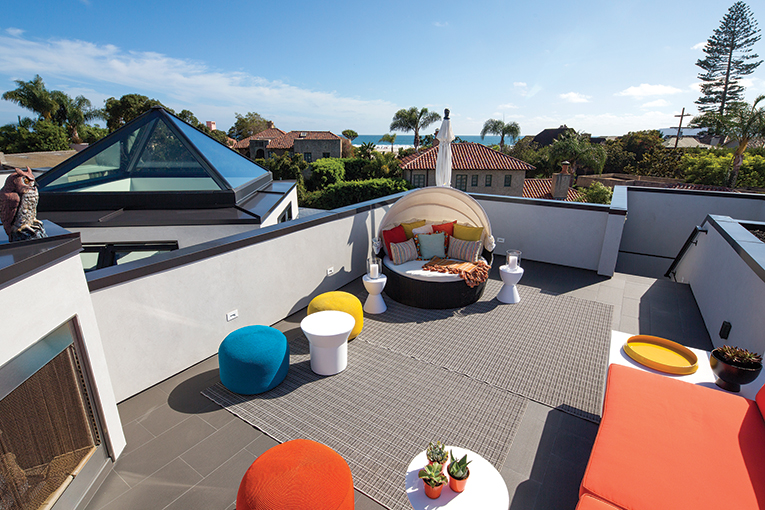 That “something” is a deeply textured surface that beautifully contrasts with the surrounding sleekness — such as that of the kitchen, which features floor-to-ceiling, high-gloss, white acrylic cabinetry that even conceals appliances.

An organically shaped canopy of gray-stained ash provides additional lighting over the kitchen island and mirrors the gray in the leathered granite countertop.

Gray ash also accents the end and top of a C-shaped divider between the living/dining space and stairwell. Italian porcelain tile in charcoal covers the floor throughout the house — smooth for interior rooms, textured for bathrooms and exterior decks that get wet.

“I love wood floors, but not near the beach and not when you have six grand-children running around,” Janie says, noting that a singular wood species also would not work as one surface for indoors and out.

Amid the white and gray, basalt squares on stair landings and risers lend a subtle but notable flourish, like garnishes on a chef’s dish. They also tie in with the basalt façade of the living room fireplace.

Entry to the master suite is through one of the more extravagant touches: a textured-glass barn door that doesn’t interfere with hallway space or closet doors.

“I wanted something unusual,” Janie says. “I’ve seen barn doors and they’re just that. They’re nice, but a wood door going across our bedroom was not going to work. I wanted it to be thick glass with an amazing texture.”

The front door is the other substantial portal: a 7-foot-wide, steel-and-glass pivot door weighing 700 pounds.

In the subterranean level (which includes Janie’s painting studio), walls set away from the foundation — to provide natural light through windows — are painted in bright colors: orange outside the family room and royal blue outside a guest bedroom. 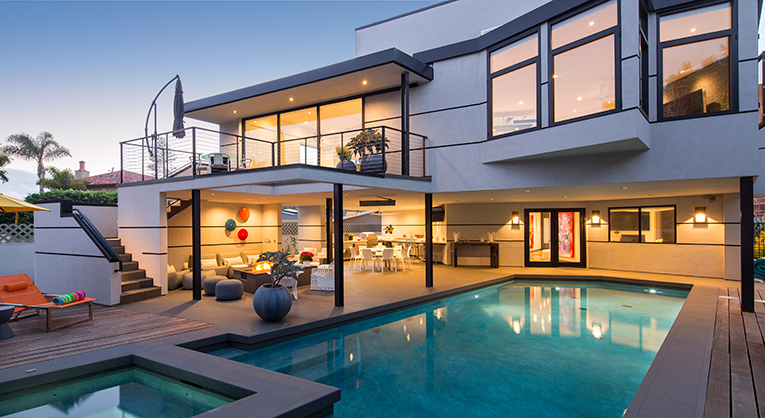 Janie’s vivid artwork and patterned textiles inject more life into the spaces. One of her largest paintings hangs in the entryway, where it echoes the vibrancy of a Turkish rug handmade by Kurdish women. Another rug, also a Kurdish-made showpiece, adorns the master bedroom.

“We were in Turkey, walking down the street and I tripped,” Jon recalls. “The man who caught me said, ‘Now you are obligated to come in my shop. Come in and I will give you some tea.’ We ended up buying three rugs.”

More color infusion comes by way of accessories, such as a kaleidoscopic collection of pillows lining a window seat
in a corner that juts out over the ground level for a perched pool view.

“In our Houston house, we went with more of a tan background, but in this house we went with white,” Janie says. “Once we picked the charcoal floor, I knew I had to somehow combine the dark with white. I needed to find a way to bring them together. So basically, I brought in lots of color and texture.”