Mark your calendar for annual festivals showcasing the talents of painters, sculptors, ceramists, photographers and more

Anyone who has lived in San Diego for 100 years has witnessed a lot of changes in the art scene. Those with shorter-term residencies can get a cap-sulized education about the city’s art movements and artists at this month’s Art San Diego (Nov. 5-8).

Inspired by Balboa Park’s centennial celebration, the 1915-2015 timeline project com-prises 100 feet of wall in a plaza created by the NewSchool of Architecture & Design in front of Balboa Park Activity Center.

Other highlights of the seventh edition of Art San Diego include an entryway exhibition by Brittany Segal (daughter of well-known local architect Jonathan Segal) and site-specific installations by San Diego Art Prize recipients Roy McMakin with emerging artist Kevin Inman and Wendy Maruyama with emerging artist Peter Scheidt. The Cultural Media Group of China returns after a year’s absence with an exhibition of ceramics.

More than 60 exhibitors (primarily galleries) are coming from across the United States and from Canada, Mexico, Argentina, China, Cuba, Italy and Russia.

“We grew in the number of exhibitors from 26 the first year to 40 the second year to 60 the third year,” says Ann Berchtold, founder and director. “Now we have maxed out the space.” And sales have continued to grow. Last year, artwork sales exceeded $5 million, Ann says, noting that part of that impressive figure is attributed to highly priced, secondary market work — for example, two Chagalls that fetched $90,000 each. The event’s opening night party benefits the Museum of Contemporary Art San Diego.

Sandi Cottrell produces two local art festivals: Mission Federal ArtWalk (April) in Little Italy and ArtWalk NTC @ Liberty Station (August) in Point Loma. The former harkens back to 1984. “It was started by people that ran a nonprofit known as the Installation Gallery for artists who weren’t showing in established galleries,” Sandi says. “I got involved in 2004 with the idea of creating awareness of the lack of art education in elementary schools.”

Both juried ArtWalks benefit ArtReach, the nonprofit that Sandi and her sister launched to meet that goal. And both include art-making activities for children and adults, as well as live entertainment.

Mission Federal ArtWalk fills 15 blocks of Little Italy and features more than 350 artists. ArtWalk NTC, which celebrated its 10th anniversary this year, is a bit smaller, with around 200 artists.

“They have very different feels,” Sandi says. “The one in Little Italy is urban. It’s quite sprawling, whereas NTC is a grass setting and very self-contained. We have artists that do both or one festival, and we always have a fair amount of new artists to keep the events fresh.

“We have accepted about half of the artists that apply, and we almost always have a waiting list,” she adds. Based on surveys of exhibiting artists, Sandi says, sales have reached $1 million in the Little Italy artwalk and $600,000 at the smaller NTC festival. 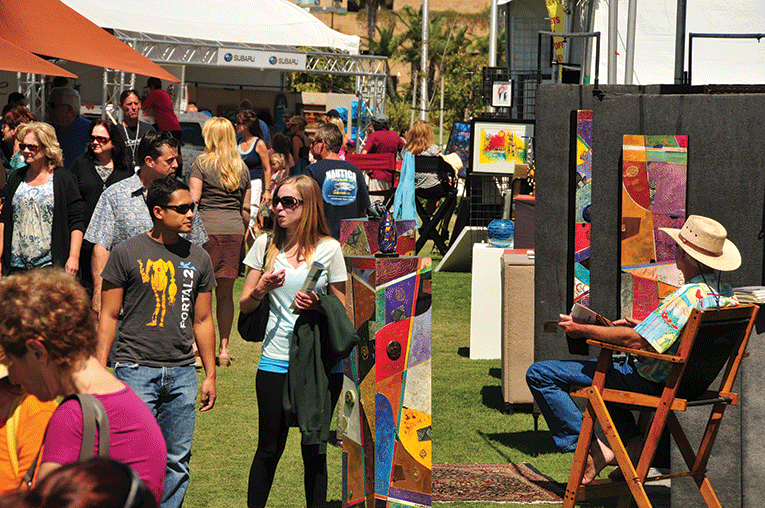 “One thing that sets us apart is our heavy focus on artists from Mexico,” Sandi says. “We always have a great collection from south of the border. I think that adds so much color to these events.”

The Kiwanis Club of Torrey Pines operates the La Jolla Festival of the Arts, which celebrates is 30th anniversary in 2016 (tentatively scheduled for the first weekend in June) at its fourth location: Nobel Park near Westfield UTC.

“We are excited about this new venue,” says Kaylie Rolin, executive director for the festival. “It’s easily accessible and visible from the street.”
About 200 artists are juried into the show, with 100 percent of the net proceeds going to charities focused on sports and recreation programs for people with disabilities.

“A wife of one of the Kiwanis Club members lost her leg in a water skiing accident 30 years ago,” Kaylie explains. “She was an avid athlete, skiing and golfing. One day, she was in a lodge in Colorado and saw a gentleman skiing on one leg. So the [Kiwanis Club of Torrey Pines] started the arts festival because they wanted to raise money for more people like this member’s wife.”

Exhibiting artists, who are asked to donate a piece to be auctioned during the event, come mainly from throughout the United States. But last year, one of the festival’s winning artists (a winner is selected for each category — painting, sculpture, ceramics, etc.) hailed from Mexico.

La Jolla Art & Wine Festival along Girard Avenue celebrated its seventh anniversary in last month with a juried exhibi-tion featuring more than 150 artists. The event includes live entertainment, food vendors, a beer and wine garden offering tastes from local craft breweries and more than 40 wineries, a kids’ area that includes the opportunity to paint a car, and a silent auction to raise money for underfunded programs at local schools.

The Old Town Chamber of Commerce puts on its Art & Craft Show Old Town in October. Held in Old Town San Diego State Historic Park, the event includes live entertainment, hands-on activities, a wine garden and food vendors. What distinguishes it from other festivals is the inclusion of crafts such as quilting, beading and fashion/home décor textiles.

North Park Festival of the Arts in May is presented by the San Diego County Credit Union, with proceeds benefiting North Park Main Street. The event takes place between 30th and 32nd Streets (with performance stages at each end) along University Avenue and on side streets. It includes a Craft Beer Block and a Kids Art Block.

Other community events throughout San Diego County can fill the remaining gaps in your calendar with opportunities to enhance your life through exposure to the arts.