Drink in the Scenery

If your interest in wine extends to the finer points of corks and other bottle closures, how various types of soil affect the taste of wine or preventive measures that guard against protein instability and tartrates, this is your month. If you just like trying different wines and don’t care how they’re made, this is your month.

If you fall somewhere between those two camps, guess what? This is your month too.

The 12th annual San Diego Bay Wine & Food Festival (Nov. 15-22) has taken on an ambitious plan, running an inaugural, multiday, concurrent (Nov. 18-21) event called SommCon. Held at the Manchester Grand Hyatt, SommCon is an educational conference for wine industry professionals — but with some of the 50 sessions open
to the public.

An ambitious plan within the festival itself is a 16-hour, guided trip to Baja’s Valle de Guadalupe for winery visits and dining. Before recrossing the border, tour-goers will enjoy dinner at Mision 19, the Tijuana restaurant of Chef Javier Plascencia, who also hosts a wine fest dinner with Chicago-based celebrity chef Rick Bayless at his Bracero Cocina de Raíz restaurant in Little Italy. The Baja spotlight continues with an expanded build-out of a Baja Pavilion at the Grand Tasting on Nov. 21. 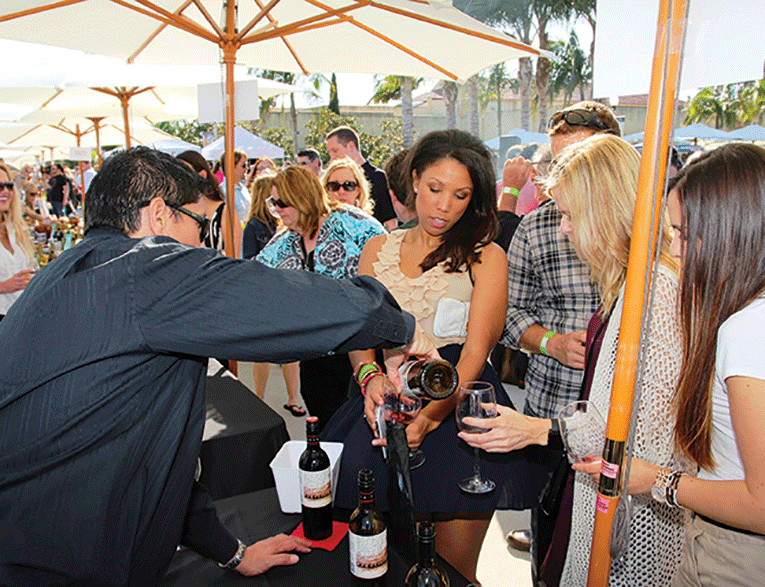 The festival has two more new aspects to it: a tasting of medal wines from the Sommelier Challenge in September, in partnership with San Diego International Wine Competition, and a golf tournament at Maderas Golf Club in Poway — with wine, spirits and food offered at holes throughout the course.

With more than 10,000 attendees over the course of the week and more than 5,000 at the Grand Tasting in Embarcadero Marina Park North, the San Diego Bay Wine & Food Festival (which funds culinary and enology scholarships) is the largest local wine event. But it’s far from the only annual opportu-nity for large-scale tasting experiences that typically include food, live music and seminars or cooking demonstrations.

Also this month, on Nov. 7, is the Ramona Art & Wine Festival at Highland Valley Ranch. In addition to featuring only Ramona wineries, this event has a distinct element: wine barrels painted by artists and offered for sale at the event, along with other artwork. The event benefits the Ramona H.E.A.R.T. Mural Project.

On April 2, 2016, VinDiego returns for its fourth iteration. The outdoor grand tasting at NTC Liberty Station includes more than 75 wineries pouring more than 325 wines. A tasting of high-end Pinot Noir and reserve Chardonnays in the McMillin Event Center takes place the preceding evening.

“VinDiego is all about fine wine, not beer or spirits,” Executive Producer David Fraschetti says. “The wines poured are
truly the crème de la crème from award-winning wineries. Some are library selec-tions; others are proprietor’s reserves and end-of-vintage wines.”

Among last year’s wineries from Oregon and California was a collective of Paso Robles
vintners that produce Cabernet Sauvignon and Bordeaux-style wines. “The CAB has 28 members, and 19 of them chose to show-case their wines at VinDiego,” David notes.
The Jacobs & Cushman San Diego Food Bank receives all proceeds from a silent auction and a percentage of ticket sales.

Also in April, also in its fourth year, also a fundraising event and also created by someone of Italian descent, the San Diego International Wine Show takes place at the Del Mar Fairgrounds. Executive Director Donato Santarsieri’s two-day event presents mostly California wines (including some that are locally produced), but last year also featured wine from Baja, Europe and South America. The expanded event included an exhibition of art and educational seminars.

Donato’s love of nature led him to choose the San Dieguito River Valley Conservancy as the event’s beneficiary. “I want to support a nonprofit that helps maintain the out-doors that all of us can enjoy as a community,” he says. “They get a percentage of proceeds from ticket sales, but they are guaranteed $5,000.”

One of the longest-running San Diego County wine-tasting events is the annual Wine & Roses, which in June marked 32 years in operation and its second year at The Grand Del Mar (now Fairmont Grand Del Mar). The one-day event raises money to send children from disadvantaged households to summer camp. Unlike most wine festivals, it includes an opportunity to taste and to purchase wines that garnered platinum, gold and silver awards in Robert Whitley’s San Diego International Wine Competition.

A June event at the Del Mar Fairgrounds gives attendees something other festivals don’t: admittance into the concurrent San Diego County Fair (though you might not want to hop on a whirlybirdish ride if you’ve been swallowing the wine you taste). As its name suggests, The Toast of the Coast features wineries (more than 80) along the Pacific Coast — from Baja to Eureka. The bonus of this festival is getting landscaping ideas in the Paul Ecke Jr. Garden Show venue while sipping wine. Like Wine & Roses, The Toast of the Coast is tied to a professionally judged competition and offers the award-winning wines for sale.

The USD Wine Classic in July has a singular niche — featuring 30 wineries whose owners and vintners are affiliated with the school. Proceeds from the event benefit scholarship funds.

For 13 years, The Lodge at Torrey Pines has hosted Celebrate the Craft, with an emphasis on regionally grown ingredients, California wines and craft beers. The October event benefits Slow Food Urban San Diego.

As the county's viticultural presence expands, so do tasting opportunities.