Water and land meet in a Mexico-inspired seafood restaurant

Coasterra, which opened in August, provides more suitable company for CRG’s Island Prime and C Level at the end of Harbor Island Drive.
The latest offering in the Cohn dining empire covers 28,000 square feet, including indoor and outdoor dining and a spacious banquet room. According to CRG founder David Cohn, it was a team effort since pencil hit napkin.

“It’s always been a shared vision,” he says. “We have a partner in [developer Aaron Feldman’s] Sunroad Enterprises, in Chef Deborah Scott and in the late [architect] Graham Downes, who spent years designing an iconic space fit for our collective idea of a modern Mexican seafood restaurant.”
Two murals by San Diego artist Rafael López, who was born in Mexico City, visualize the restaurant name’s reference to coast and land. The exterior mural’s cool tones of blue and gray blend with the water-front locale. The interior piece, in orange and brown, warms up the dining room with the earthy sense of clay and soil.

David knew that it would be easy to make a Mexican restaurant that fit San Diego’s Old Town template, but realized the vision of something modern and bold required more. For example, portions of the hickory bar top were stained dark brown to represent land and left natural for water, mapping a silhouette of the mountainous skyline around Mexico City. 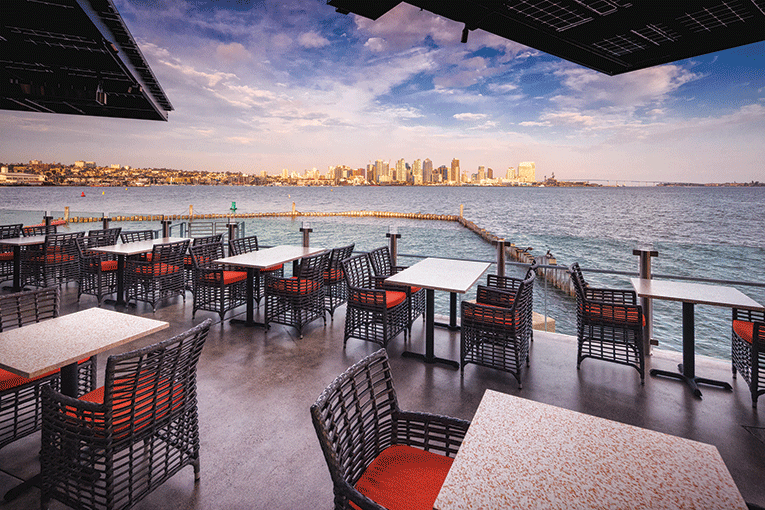 “Traveling around Mexico gives you more a sense of a modern culture and look,” David says. “We even worked in the topography and names of many of the coastal towns and cities.”

Nearly every point in Coasterra provides a panoramic view of the skyline and bay. Outside the entrance, a large fire pit and outdoor seating create a lively patio vibe. As you move inside, the skyline becomes part of the décor, thanks to walls of glass.

A short interior wall at one end of the bar highlights another skyline — but of tequila bottles, not skyscrapers. Dark wood, painted metal and mirrored panels with a smoky patina set off the beautifully lit display. On the longer wall behind the bar, elongated limestone tiles in a range of hues create horizontal banding. The design team enhanced the effect by flipping some tiles over so the back side shows. For drama and lighting, David had punctured-tin lantern fixtures custom made in Baja to hang in a grouping over the bar.

“Graham wanted to source as many materials as he could from Mexico — Baja in particular,” he says. “We took a trip to Oaxaca, found great pottery and other rustic Mexican pieces and even leaned on Rafael to help select exterior tiles that would complement his mural.”

The most obvious energy-efficient feature is the spacious patio cover made with photovoltaic cells imbedded in heavy glass. “They give shade, they’re watertight and they cast a beautiful shadow pattern on the concrete during the day, which was sort of a surprise for us,” David says, adding that he estimates the solar roof will supply 35 percent of the power needed to run Coasterra.

“When Graham died, Coasterra was 90 percent designed, but that was mainly the structure and exterior details,” David says. “Using what he left us, I think I managed to make the interior something he’d like. Whenever I walk through the place, I think to myself, ‘Graham would be OK with this. We did good.’”