Rice to the Occasion

The next time you sidle up to a sushi bar, take your taste buds on a tour of Japanese sakes

Sweep into a sushi restaurant and the bar beckons. Your seat awaits before a glass case filled with silky fish. Chances are good that you will order sake to accompany the coming selection of rolls and sashimi. And San Diego’s sushi spots will help you explore an array of aromatic, sweet to dry, complex to clean, aged to fresh sakes.

The owners of Saiko Sushi, Evan Bennett and Anthony Pascal, are Certified Sake Professionals. Evan has been exploring sake for a decade and this spring hosted five Japanese Sake Masters for a special dinner, pairing their best with his. For new sake drinkers, he has put together eight flights for tasting.

“If you like vodka and gin, try the Sea flight, which is clean, smooth and dry,” he suggests. “If you’re a whiskey drinker, consider the Land flight with its big, full-flavored tastes. Looking for a modern, more polished and floral profile? Then order the Air flight.”

The Japanese reverence for sake began in third century B.C. with rice cultivation. Because production was controlled by the Imperial Court and religious institutions, it was reserved for rituals and festivals. Today anyone can enjoy it. 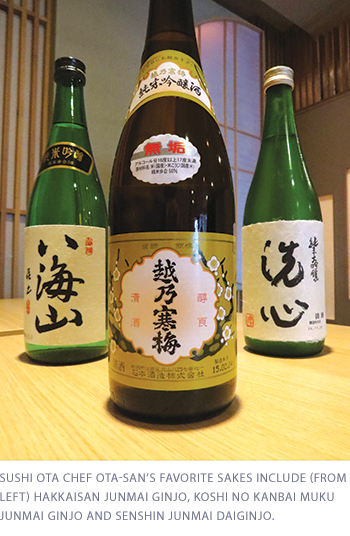 Sake traditionally is made from rice strains other than the kind used in food dishes. Sakamai (specialized rice) variations are coveted and expensive. Other ingredients play their part. Velvety soft to mineral-rich, hard waters flow throughout Japan; each affects the flavor, aroma and color of sake. Grapes naturally ferment when yeast is added, but rice starch must be converted to sugar by koji-kin, a rice mold, before fermentation can begin. Sake yeast then converts sugar into alcohol.

The most flavorful starches are concen-trated in the center of the grain, with fats and proteins on the outside. Maintaining a consistent flavor profile depends on very specific rice polishing. The highest, most refined sakes retain about 50 percent of the grain and are served chilled. Junmai-shu is brewed using only rice, water and koji mold. Honjozo-shu varieties use a very small amount of distilled alcohol in the brewing to bring out flavors and aromas.

The second tier of sake comprises ginjo and junmai ginjo. With their light and fruity flavor profiles, they are best served chilled. In the third tier are honjozo and junmai, which have the biggest productions. They are versatile, complement a wide range of foods and are enjoyed chilled or slightly warmed.

In Japan, small dishes are prepared to enhance the enjoyment of drinking, rather than the other way around. Traditionally, daiginjo and ginjo sakes go best with simple and lightly flavored appetizers. As the meal progresses with stronger seasonings and heavier textures, drier junmai balances a meal well. Unfiltered, white and sweet nigori sake is favored as an after-dinner drink or as a complement to spicy foods.

San Diego offers many great opportunities to explore a range of sake. Following are a few places you might start.

Izakaya Ouan
Serving home-style Japanese cuisine, Izakaya Ouan maintains a generous sake list. The small space is set in a modest Hillcrest strip mall just off University Avenue. In keeping with the rest of the menu, sake selections (yamahai, honjozo, junmai and junmai ginjo) are modestly priced by the glass or bottle.

Saiko Sushi
On University Avenue, steps from the North Park sign, Saiko Sushi is flush with bright murals and light from large front windows. The owners have put together sake flights called Sea, Land, Air, Aged, Seal, Modern, Nigori and Nama. The flights are served three up and range in price from $12 to $14. Saiko Sushi also has a Coronado location. 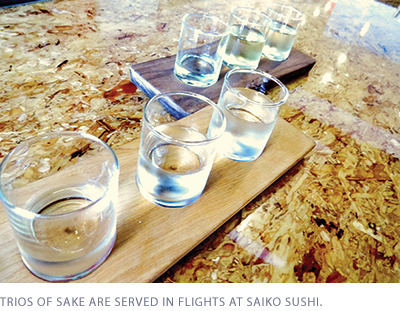 Sushi Ota
Behind Sushi Ota’s modest, Mission Bay Drive exterior, founder and Master Chef Ota-san has been importing a range of fine sakes for his knowing clientele since the 1990s. Prices ($20 to more than $140 per bottle) reflect his rare and elite selections. “Sometimes not even Japan gets what Ota orders,” Manager Midori Taira says. His favorite, Muku, is served chilled.