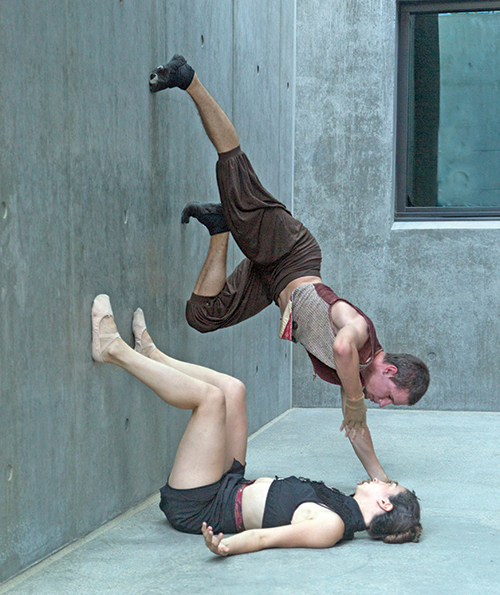 In a playhouse, actors take the stage, the curtain goes up and the show begins. At the end, the actors bow to applause and the audience goes home. It’s a simple, time-honored ritual.

This month, La Jolla Play-house spins tradition on its head when it presents its second, now biennial, Without Walls Festival. The three-day event (Oct. 9-11) encompasses more than 20 performances, with simultaneous productions in various locations around the University of California, San Diego/playhouse area.

“There will be a shuttle running, and nothing is more than a 15-minute drive away,” says Marike Fitzgerald, the festival’s associate producer. “Our goal is that people can park their car and see several performances in a day. They can walk to most of them.”

San Diego-based City Opera’s Queen of Carthage takes place in a grove of trees at Scripps Institute of Oceanography. Two other productions occur in parking lots — inside cars. Other programs will take place in a garden behind the playhouse and in the garage of a residence across the street.

“Several pieces are being staged at sites that are part of the [UCSD] Stuart Collection, using architecture and artwork in interesting ways that inform the pieces,” Marike says. La Jolla Playhouse created its Without Walls initiative in 2009 to “venture beyond the physical confines” of the theater. The festival cam from a combination of individual immersive, site-specific presentations (including this year’s The Grift at the Lafayette Hotel) and playhouse staff members attending similar festivals throughout the country.

“We sent out a request for proposals, asking applicants, ‘Describe your project, the site you have in mind and how your piece interacts with the site and with the audience,’” Marike says. After determin-ing the feasibility of projects, they invited applicants in for interviews.

“Then we had to get per-mission for sites they had selected,” Marike says. “Some are on the UCSD campus, so we had to go to various depart-ments that had control over those areas. In some cases, the answer was not ‘yes,’ so we had to go back to the artists to select other locations.”

In addition to reviewing submissions, La Jolla Playhouse extended offers to artists with whom they have had relation-ships, those whose work they saw at a conference or another festival, and artists “with a reputation for doing really exciting work that we have seen,” Marike says. “It’s about getting to know who’s out there, who’s doing exciting work and what pieces fit with our vision and with the whole festival.”

Coordinating multiple, simultaneous and independently produced pieces could be considered daunting, but La Jolla Playhouse has the system in check. “The weekend of the festival, it’s all hands on deck for playhouse staff,” Marike says. “There are many partners that are producing work. They are responsible for their own pieces. We say to them, ‘Here’s your site. Here’s what you need to know. Here’s your point of contact at the playhouse.’ But they have autonomy over their projects. It enables us to ‘umbrella’ quite a bit more shows, because we do not have to focus on the specific logistics of each piece. The most important thing is making sure they have a clear line of communication to people at the play-house, and we continue to check in with them.”

The area that La Jolla Playhouse will assume direct control over is in front of its building: the Festival Village that will be open during performance hours.

“We’ll be taking over all the available space — basically anything that is not the fire lane,” Marike says. “It will be a hub of activity. In between shows, you can come back to the village, get food, listen to music and do interactive art. Even if a performance is sold out, there will be something to do for which you don’t need a ticket.”

The festival is not intended as a revenue generator, and the most expensive tickets will cost less than $30. “It’s not income sustaining at all,” Marike says. “It is just a wonderful opportunity to put on great art and showcase what we do.
“It is part of who La Jolla Playhouse is, and we are committed to it.”