Situated in one of San Diego’s most iconic beachfront resort hotels, Oceana Coastal Kitchen provides a glimpse of potential ideas to come in the quickly escalating Mission Beach area.

The Evans Hotels-owned Catamaran Resort and Spa has been a Mission Avenue fixture since the late 1950s and has seen its Polynesian motif rise and fall in popularity through the years. The last decade reintroduced tiki and other nods to modern primitivism as people with a hankering for space-age nostalgia rediscovered Mid-century Modern design, Palm Springs chic and Hawaiian shirts.

One thing that lost its cool factor was the Atoll Restaurant inside the Catamaran. New in the late 1980s, the Atoll was part of a larger resort remodel effort, but didn’t see much in the way of updating for nearly 25 years. After the adjoining spa underwent a luxurious ($2 million) facelift in 2005, it became clear that something had to happen to the Atoll to keep pace with the direction Evans was taking its properties. 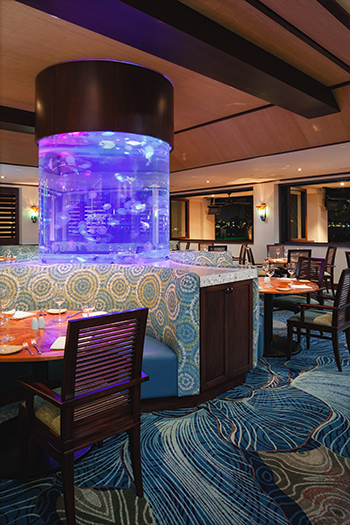 Kristine Smith Design Studio, based in Escondido, worked with the Delawie architecture firm in Little Italy and Dempsey Construction of Carlsbad to reconfigure and redesign the restaurant, which debuted as Oceana in February.

“Location was my driving force,” Kristine says. “My palette came from the ocean and from the existing hotel — moving in a fresh direction without ignoring the strength of the Catamaran brand.” She understood that she couldn’t stray too far from the resort’s visual experience, but also that the restaurant had an important role to play in the character and draw of the resort.

To avoid the “sea of tables” seating scheme, Kristine relied on upholstered banquettes and low booths for intimacy. “Everything is anchored to the center of the room in some way,” she says. The visual centerpiece is an 800-gallon, circular jellyfish tank. “Bill Evans is very visionary,” Kristine says. “From the tank to moving exterior walls and incorporating a pergola design for outdoor dining, he definitely knew how to make that open-air feel a reality.”

A new cold bar area near the entrance showcases chefs at work on towering seafood creations and sushi. For the bar, Kristine chose Vetrostone, a striking combination of quartz, seashells and sea glass.

The stacked-quartzite wall behind the bar presented a challenge. “The pieces are wedge-shaped, so we had to make the design on tabletops and slide the pieces around until we were happy,” Kristine says. “Then we had to transfer them one at time to the installation crew.”
One-inch-square, iridized glass tiles accent 16-inch-square, copper quartzite tiles on the floor that runs from the restaurant entry along the cold bar.

A wood-paneled pony wall — anchored to the ceiling by etched-glass panes lit by programmable, color-changing LEDs — separates the cold bar from the main dining room. “We started with the idea of cast glass,” Kristine says, “but our vendor insisted we’d be happier with the way etched glass handles the light.”

Beyond the wall, carpeting in muted blues, greens and tans sweeps through the dining room. Kristine made a bold move with a pattern of the scale typically seen in casinos and convention centers. 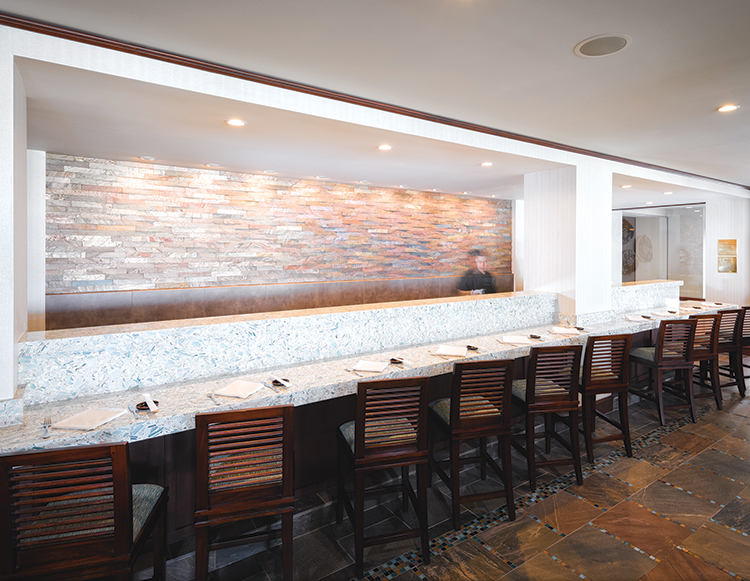 “It has such a huge ‘repeat’ that I wasn’t sure it would work in a smaller area,” she says. But the sea-themed hues work in context with the whole.

To further link Oceana to its Catamaran DNA, Kristine reused tabletops from the Atoll and commissioned the original crafts-man to make new tables from koa wood.

“From lobby to restaurant, I wanted to keep the experience smooth and in step,” she says. “I sourced chairs from Bali. And James Stone, a glass artist in North County, made our sconces and the colorful, flower-like ceiling fixtures in the semi-private dining room. The large wooden dining table in that room was crafted locally by the David Alan Collection in Solana Beach.”

With the restaurant’s redesign, more patrons can eat alfresco under shade from a new trellis or inside (but with an outdoor feel, thanks to folding glass doors that remove the barriers between spaces).

“I’m pleased with the way Oceana joins the resort to the bay,” Kristine says. “From the food to the view, you get a great sense of continuity in the space.”