In Harmony with the Outdoors

Although he says, “Alaska is the navel of the universe for me,” it was the Anza-Borrego desert that delivered John Luther Adams a life-altering epiphany.

The dichotomy in environ-ments exceeds the obvious.

The 62-year-old composer, who won a Pulitzer Prize in 2014 and a Grammy this year for his Become Ocean symphony, describes “a humble and provocative experience” when UCSD students mounted an outdoor performance of his work in 2006.

“Strange and Sacred Noise is a concert-like work for a percussion quartet,” John says. “It’s this big, noisy, scary piece that’s intended to be heard in an enclosed performance space. We took it outside, and my big sound blew away with the wind.” Although he spent his life composing music inspired by the outdoors, he says, “I realized then and there that maybe it’s time to really step outside and make music intended to be performed there.”

On Sept. 27, San Diegans will gain an appreciation for the full scope of what this means when 80 or more musicians spread out in Balboa Park’s Japanese Friendship Garden for a free performance of Sila: The Breath of the World. John’s first composition for outdoors was Inuksuit. Like Strange and Sacred Noise, that 2009 piece was written for percussionists — but for 99 musicians. 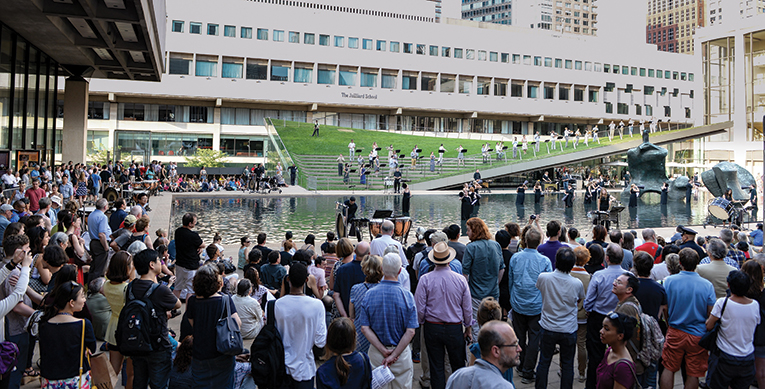 Sila was created as five ensembles (percussion, wood-winds, strings, brass and voice), each with 16 parts — for a total of 80 parts. Each musician is free to set his or her own pacing, using their out breath
to determine the length of notes.

“There are markers, like mileposts in time, and all the musicians use a stopwatch function [on their iPhones],” John says, noting that the markers keep everyone “more or less” in the same region of the piece. The harmony changes slowly and “dissolves into the breath of the world, into the ambient sound of the place.

“Sila and Inuksuit are entirely composed pieces,” he continues. “Every note you hear is written down, and the sequence of events is specified. What’s different about these pieces is that the time is more flexible than in a concert hall. It’s more like time as we live it.

“When you take music out-doors, it turns things inside out. In a concert hall, we are trying to seal ourselves off from the big world and regard anything else as an intrusion. Outdoors, you can’t exclude the world, so you have to open up. … Sometimes you don’t know if you are hearing the music of the piece or the music of the place, and that’s the point. I hope these outdoor pieces help us — encourage us — to expand our awareness of the never-ending music of the world that’s around us all the time.”

Sila premiered in New York City on July 25, 2014, with musicians stationed across the lawn and even in the Hearst Plaza fountain pool at Lincoln Center. The most recent performance was at the Ojai Music Festival in June. In between, the piece was commissioned for three venues in Washington, D.C.

“We were supposed to do it with a full symphony on the Jefferson Memorial, but wea-ther forced us indoors into the Museum of American History,” John says. “And, frankly, it confirmed my feeling that Sila is an outdoor piece. It was too much sound for the space.”

After 40 years in Alaska, John still considers the 49th state home and maintains his studio and 5 acres there. But, when not traveling with his music, he divides his time between New York City and the Mexican “desert outback.” He considers La Jolla Symphony & Chorus Music Director Steven Schick a good friend and will appear here for the symphony’s performances of Become Ocean on Oct. 31 and Nov. 1. He personally selected the Japanese Friendship Garden as the site for the performance of Sila in San Diego.

“I am sure we will want to encompass as much of the space as we can,” he says. Audience members are encouraged to wander around during the performance to experience the 70-minute composition from different spots. John himself enjoys the freedom.

“When listening to indoor performances of my pieces, I am just sitting there, and all I can do is worry. With the outdoor pieces, I am like a kid in the candy store,” he says. “There’s no illusion that I can control things, so I am able to really let go and follow my ears. I will often start listening in one space and then move around, and that’s what I encourage other people to do.”

At the Ojai festival, John collaborated with Steven on the presentation — as he will in San Diego.

“You can walk up to a cellist playing at a distance of 2 or 3 feet. There’s an intimacy to the experience that is really profoundly moving,” Steven says. He notes that the site-determined aspect of the piece translates to placing the instruments and voices in a spatial relationship so that the chords “bloom.”

One of the composer’s goals is to inspire “more ecological listening.”

“We walk around these days with our earbuds in. So much of our daily experience is sealed off from where we are,” John says. “These pieces are invitations to take the earbuds out and listen to the whole world of sound around us — the ecology of the sounding world. If we listen that way, we come to hear in a new way where we are, and I think knowing where we are helps us understand who we are as humans and how we fit into life on this Earth.”