Brunch With a Punch 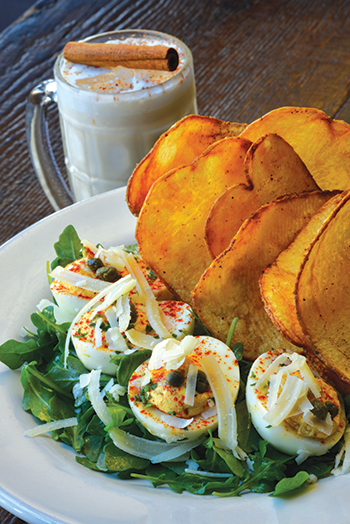 At an order for a Milk Tyson Punch at Bankers Hill’s new Sunday brunch, the server more or less leapt for joy. “It’s the best!” she exclaimed. And the comfy-but-heady shake of bourbon, blackstrap rum, vanilla, milk, cinnamon and sea salt indeed is delicious and perfect for brunch. Its main competition is the Banker’s Bloody Mary, speared greenly with a celery stalk that in turn supports a devilishly good deviled egg. The restaurant dishes many such eggs on share plates piled with lemony potato crisps and arugula salad (savory contrasts to irresistible, just-baked cinnamon rolls frosted with cream cheese). Brunch heads in many directions, like green chile soup that provides a piquant peek into chef/co-owner Carl Schroeder’s reliably clever imagination. Served in a cup, the assertive soup shares a plate with cabbage salad and a shrimp-filled taco, sides that wouldn’t occur to anybody else. Well-dressed and dressy, barbecue-braised pork tacos boast many garnishes, including juicy chunks of pineapple. House-baked English muffins support eggs Benedict that, simply put, are elegant enough to set the standard for the dish.

ENTRANCED BY TRUFFLES, Russell Rumner, the new executive chef at Croce’s Park West, makes a mean plate of linguine and meatballs. A former San Franciscan, he considers San Diego a place where "there’s room to shine” and lauds the city’s “wonderful produce and proximity to Mexico.” He rolls jumbo boulders of veal and pork flavored with white truffle atop a mountain of pasta in lively marinara sauce, supplemented by crostini dusted with Parmigiano-Reggiano. His highly seasoned menu goes gustoso by way of a refreshing ahi crudo with pickled jalapeños, steamed mussels in a wonderful coconut-curry sauce and an entrancingly salty caramel pudding.

JUST IN TIME FOR 1993 to be a better year, Manchester Grand Hyatt on the downtown waterfront opened with a New Year’s Eve gala that helped guests put the 1992 recession out of mind. The 40th floor Top of the Hyatt opened shortly thereafter, causing astonishment with the near-wraparound view of San Diego and the owner’s decision to not install a kitchen — not even an eensy-teensy one. It seems management expected the bar to last six months at most. Nearly 23 years later, a completely new Top of the Hyatt is set to debut Sept. 19, following a three-month rebuild. Improvements include removing two interior columns to further open views and upgraded collections of high-end Scotch and bourbon. Still no kitchen. 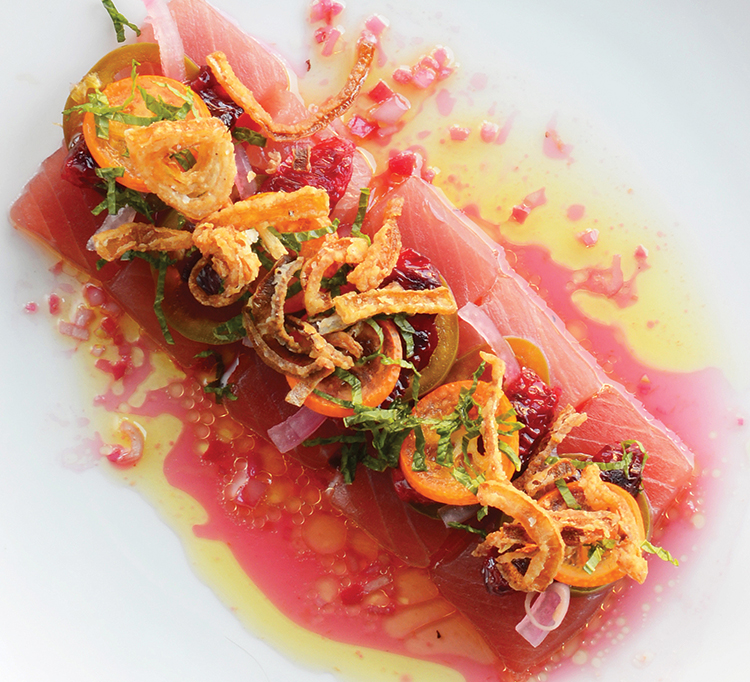 INCREASINGLY THE CITY’S restaurant mecca, Little Italy is less and less about pizza and more about creative fare presented in impressive settings. Kettner Exchange is a hunky double-decker with grand bay views that also provides intimate quarters in which to explore chef Brian Redzikowshi’s menu. The fun stuff is on the small plates, like braised oxtail on artisan grits (really!) with artichoke and tomato, a cross-cultural event that slides happily down the throat. Servers entertain with such announcements as, “Instead of bread service, we do popcorn service.” The sriracha-lime flavor-of-the-day was pretty good, particularly ahead of Thai-style suckling pig larb, a mince of spicy sweet-herby meat wrapped in lettuce leaves.

AS THE GASLAMP QUARTER endlessly reinvents itself, we note a new basement club called Trailer Park After Dark. Sometimes a name says it all.

FARTHER DOWN FIFTH AVENUE, Rustic Root serves weekend brunch items such as homey egg sandwiches and brioche French toast, as well as a breakfast risotto. It may go without saying that the mixture of farro, red quinoa and mushrooms, which supports two poached eggs, incorporates kale as well.

FINISHING THE EXCEPTIONAL spaghetti carbonara at South Park’s pleasing Piacere Mio probably wasn’t the best idea, since it was mounded sky high and followed a caprese appetizer of fresh mozzarella, heirloom tomatoes and basil that featured a big side of zesty eggplant caponata. And while the menu gave no warning, a piled-up house salad preceded the pasta. Lunches this large are rare locally.