An Escondido couple replace their lawn with a water-conserving garden

San Diego County’s semi-arid climate can take some getting used to for transplants from wetter parts of the world. This holds true for plants and people alike.

Leon and Susan LaFreniere, having moved to Escondido’s San Pasqual Valley from Connecticut, were dismayed by how frequently
they needed to water their lawn facing the sixth hole of Eagle Crest Golf Club.

“We were taking out shrubs and putting in succulents. Then we started taking up some of the grass along the edges to plant more succulents,” Leon says. “We were shrinking the footprint of the grass.” 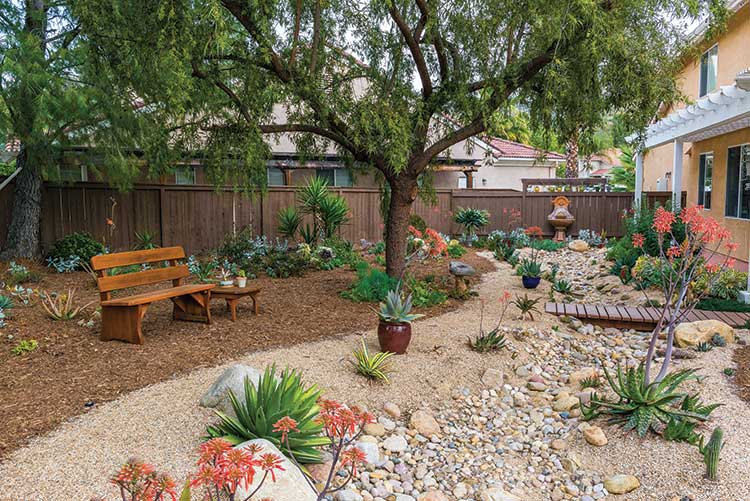 Soon it became clear they would need a more formal plan to replace the lawn entirely with a xeriscape garden. They brought in designer Susan Rojas of Escondido’s Waterwise Botanicals and contractor Robert Oldfield of Fallbrook’s Landscape One Inc.

Once a concept was conceived, the first task was to carefully undo all the hard work Leon and Susan had accomplished.

“By the time we did the garden, we had over 300 plants. One of the things we needed to do before they started was remove everything,” Leon says.

“We did the little ones and left the big ones for them,” Susan adds. The process was a bit over-whelming, she admits. Uprooted succulents filled the patio, the garage and a greenhouse.

Then came the heavy equip-ment. Grass was excavated, soil shifted to form berms and a dry riverbed trenched the length of the back yard.

“They sculpted everything first. They dug out the area for the riverbed. It scared me a little bit,” says Susan, noting that Robert was able to ease her mind as the project took shape. “You sort of need the bones before you can figure out where the other things go,” she says in hindsight. 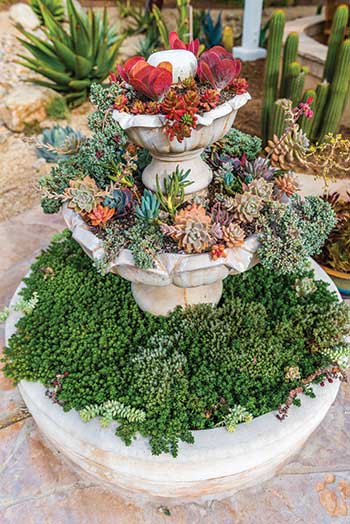 Leon and Susan then worked with the designers to determine where each plant should be placed. The succulents they removed earlier survived the transition.

“Succulents are all full of water. You can pull them out of the ground and leave them for quite a while,” Leon says. “They’re easy plants. That’s part of the charm of them.”

“We bought six specimen plants to anchor different places, plus those two trees. Otherwise, all the plants had multiplied so much that we could spread them around and put them in new places, sort of with a plan.

Although the plan was still somewhat spur of the moment,” Susan says, “you need to think about which plants like it drier or need a little shade and group those together.”

Plants were tucked next to rocks and in clusters as might be found in nature. An Aloe striata hybrid and aloe ‘Cynthia Giddy’ line the dry riverbed, creating a “river of big, beautiful orange flowers” when in bloom, Susan says. Gardens of the Year judge Sara Bendrick noted that the dry riverbed provides “a great opportunity to break up space and add interest.”

A seating area was created at one end of the garden, with big rocks on which to perch and a patio of flagstone pavers interspersed with dymondia. A ceramic bust of literary legend Gertrude Stein, a work by Leon’s sister-in-law Gayle Fichtinger, watches over the spot.

Beyond their use in the river-bed and as seating, rocks are used extensively throughout the garden, as steppingstones and set upright in Zen-like vignettes. Their inclusion in the garden is ironic, Leon says, since he and Susan wanted to avoid gardening near boulders as they had in Connecticut.

“It was always a problem trying to garden with stones and slopes. We said when we came here we wanted flat — no stones.

After we were here for a few years and it came time to redo the garden, we thought, ‘Well, we need some hills,’” Leon recalls. Judge Ciro Delgadillo admired the use of rocks in addition to the “great selection of succulents.”

It’s been a year since the garden overhaul was completed, but Leon and Susan continue to add and shift around plants and pottery. An added bonus of their new landscape is a 40 percent reduction in water usage, a num-ber they suspect will improve as plants become more established.

While they are skilled gardeners, they suggest anyone could transition their yard from water-thirsty to water-wise.

The couple has been pleased with the culmination of their landscaping project. Says Leon, “We always spent a lot of time outdoors, but one of the things we like about being here is the whole indoor/outdoor lifestyle. Redoing the garden is like adding a room to your house. It makes you want to go out there and spend more time in the outdoor room.”