A glorious expanse of craggy cliffs combined with the vast blue of the Pacific Ocean delights the mind and serves as the backdrop to Frank and Victoria Hobbs’ rear garden in La Jolla. But that wasn’t always the case.

“Victoria’s parents had lived here a long time; and when we moved into this house, the landscaping had matured to the point that it was no longer appealing,” Frank says. “A particular issue was a stand of acacia trees along the western and southern boundaries of the property that obscured the view of everything.”

One day, Victoria realized that the acacias, along with shrubby myoporum and a plethora of Indian hawthorn also were eating up flat, usable surface areas.

“There was a fair amount of property that was unused,” she says. “We had hired Torrey Pines Landscape to do the maintenance, so we asked [owner] Harry Thompson to draw up plans. Then we sat on those plans for about 18 months and finally decided to do it.”

The garden’s makeover im-pressed attendees of May’s La Jolla Secret Garden Tour and 2015 Gardens of the Year judges Sara Bendrick, Jason Jarvis and Ciro Delgadillo. The juggling of colors and textures inspired Sara, while Ciro appreciated the masonry components and Jason mentiond the “great use of natives that give contrast to the yard.”

Harry juxtaposed gentle curves and rectilinear forms in the updated hardscape, which helped add visual interest to the pool that the couple use often and wanted to retain.

“Victoria and Frank asked for a modern living and entertaining area around the pool,” he says. “Working with the parallelogram shape was a big challenge, because it did not seem to fit gracefully into the site.”

A curved, brick staircase, to which Harry’s team added brick columns to mimic those at the front of the California ranchstyle home, lead down from the house to the pool.

Originally, the pool had a swimming lane at one end that connected the main body of water to the hot tub directly in front of the pool house — “a shed that contained the pool equipment and collected spiders,” Frank elaborates.

Now, bougainvillea cascades down the wall near an updated pool house that contains a conveniently located kitchen and bathroom.

A lounging area behind a trellis of white star jasmine replaces the swimming lane, and the hot tub has been moved to the other side of the pool and raised to provide an ocean view. Its new spot is near the outdoor dining area and a black slate water feature that Frank designed (“my one contribution to the new landscaping,” he says, although he also made a stainless steel box that conceals a pop-up, big-screen television that he wanted in the barbecue area).

“Off to the south side of the remodeled pool, we created a sunken outdoor living room with a bar and barbecue,” Harry says. “Curved walls provide extra seating around a fire pit. The heavy-beam shade structure above the space makes it feel like a room — one of a series in this landscape that’s connected by paths.” 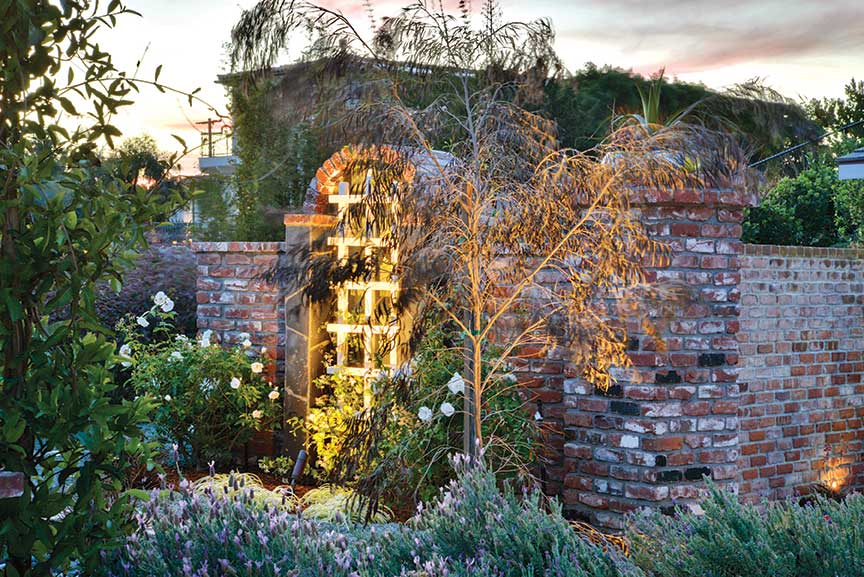 Meandering walkways en-chant this back garden, but none are more intriguing than the decomposed granite trail with rough timber steps heading down to a secret garden that’s not visible from the house.

Farther down, the yard transforms into a striking mix of succulents with a variety of agaves and aeoniums. The pathway provides a series of lookouts and culminates at a circular sitting area blessed with an astounding view of cliffs and the Pacific Ocean. The profound sense of nature’s power encourages meditation in this tucked-away, Zen-like spot.

“You could go to a thousand gardens and never have some-thing like that,” Frank says. “The whole back yard has a different feel now that it’s been opened to the ocean view. But I could have my back to the ocean and be perfectly content. I love the landscaping.”