What most people probably saw when they looked at the house for sale on a cul de sac in Mission Hills was the enormous utility pole placed front and center at an entrance stoop; a blotchy, stained, concrete-block wall with an unappealing pink hue; and a foreboding, dark entryway.

Luckily, homebuyer Mark Whitehead and architects Hector and Pamela Magnus had the ability to look beyond what they could see to imagine what could be.

Mark was on the hunt for a Mid-century Modern home on a quiet street abutting a canyon. This 1956 house fit the bill, except that, as Hector says, “The home was mid-century, but it was missing the whole modern aspect. It had kind of rustic, almost countrified elements. What we immediately noticed in the post-and-beam construction were lots of possibilities to open up the interior of the house and allow natural light to come in through the roof.”

When you opened the front door, you were blinded by sunlight streaming into the darkness through sliding-glass doors on the north side of the house. When your eyes adjusted to this tunnel effect, you noticed you were in the living room, standing in front of a post that was not aligned with ceiling beams. Fleshing out the scene were green, wall-to-wall carpeting; shiny, outdated wallpaper; and a pink, concrete-block fireplace that functioned as a room divider between the living space and the down-home, we’ve-got-knotty-pine dining/kitchen area. 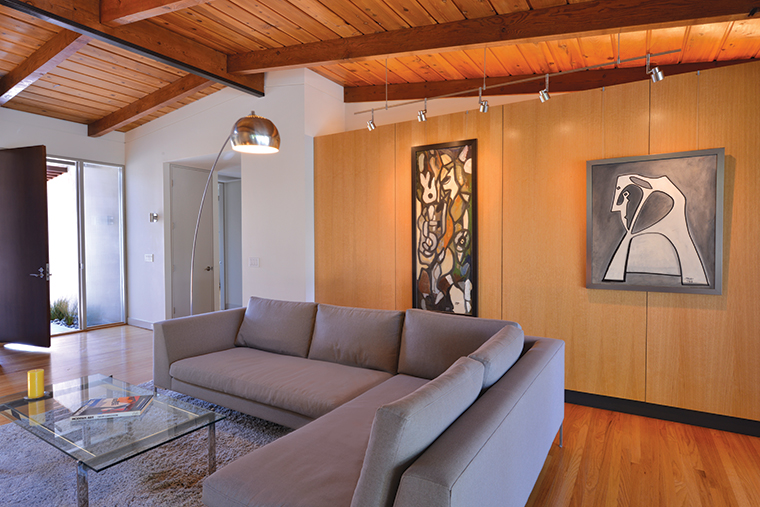 To overcome the single source of light, skylights were added above the kitchen, which brought more light into the core of the home, and a sidelight was installed by the new, pivoting front door.

“It was gloomy, and now it’s not,” Mark says. “The sliding-glass doors looking out toward the canyon from the living room were low and short. Hector and Pamela saw fit to make them higher so that you could visually follow the beams inside the house to the outside of the house. This not only visually connected the inside to the outside, but also emphasized the beams and opened the view.”

A steel frame, fabricated along the ceiling’s crossbeam, elegantly replaced the obstructing support column. The same cold-rolled steel was used for the fireplace surround. Combined with a black quartz hearth, that treatment modernized the look of the fireplace, which now has white concrete to match the home’s updated, minimal color scheme of white and gray with a tad of black. 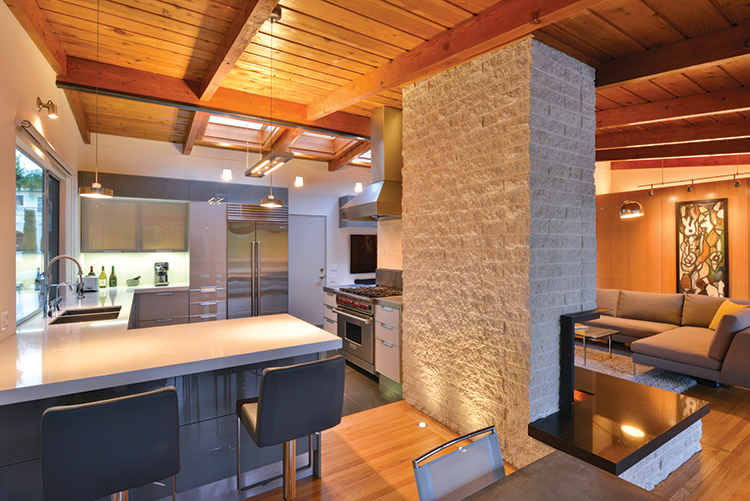 “We wanted to expand on the open-plan feel that the house had; but the fireplace was huge, brooding and in the center of the space,” Pamela says. “We had a big debate about whether to keep it or get rid of it. When we decided to keep it, because it was part of the original charm of the home, we looked at different options, like drywall or plaster to cover the stone.”

Mark did research and discovered an environmentally friendly stain called Dyebrick from England that changes concrete’s color while allowing the aggregate to show through. He applied it to the fireplace as well as the outside wall. Up-lights on the floor by the fireplace showcase the concrete block’s texture.

On the opposite side of the fireplace, the kitchen/dining area has the identical layout as before. But the removal of overhead, view-blocking cabinets connect the kitchen with the home’s open style.

Porcelain-tile flooring delineates the kitchen from the dining and living rooms, where wood flooring (a surprise discovery under the carpet) rules. For continuity, porcelain tile also was installed in the back-to-back guest and master bathrooms along a hallway on the east side of the house.

“We were working in a tight space, so the master bathroom’s toilet room and shower are right next to each other,” Pamela says. “Doors take up a lot of room in a limited space, so we came up with the idea of a frosted-glass door that can slide in front of the shower or in front of the toilet room.”

In the original layout, the master bathroom — with a froth of golden-yellow block tiles covering almost every surface — was situated on the north end of the master bedroom blocking canyon views. With a reorganized footprint, the calmer gray-and-white bathroom now lies on the other side of the bedroom. The two spaces open to each other, but a barn door glides into place to afford separation when desired.

Relocating the master bathroom allowed Hector and Pamela to give the master suite a canyon view, which before was only seen through a tiny window in the bathroom. Where the master bathroom had been, became an additional area of the master bedroom, often used for reading. With large windows, the space links the bedroom to the view and, with an 80-square-foot addition, to the back deck through another sliding glass door.

“The deck was there before; but because it sloped toward the canyon and you gained momentum the closer you got to the rail, it was very uncomfortable,” Hector says. “To make the space more comfortable for entertaining, rather than sloping the deck almost 20 feet out down the hill, we sloped it halfway down the hill and brought it back up. Now when you walk on the deck, it feels natural as you go toward the middle and then walk up as you near the edge.”

A 45-inch-high ipe bar rail travels all the way around the deck to provide a sense of security and a resting spot for cocktails. At night, recessed LED lights on the underside of the rail lend ambiance, as well as a visual boundary line. A custom-designed fire element adds drama and warmth.

The other outdoor space on the south side connects to the second bedroom, which Mark uses as a home office, through another set of sliding-glass doors. On this patio, half of the original concrete block wall was retained, while wood slats in combination with solid concrete replaced the other half. The white concrete contrasts well with gray concrete, installed here and on the back deck (replacing Mexican tile) as flooring. The minimal materials and colors echo those on the interior.

“The project really is a dramatic trans-formation that, at the same time, retained and honored all the positive fundamental structural features that exemplify Mid-century Modern,” Mark says. “I’m delighted — and so was the nephew of the [now deceased] original owner. He had nice childhood memories of visiting his aunt and was so pleased that I wasn’t scrapping the place. When he saw the home after it had been remodeled, he was absolutely bowled over.” ❖