A traditional living room and kitchen belonged to the days when designer Megan Bryan and her husband, architect Bruce Peeling, lived in their Point Loma home as a family with children. Now that the last of the trio of kids —Brian, 38; Sam, 25; and Madeline, 22 — have moved out, Megan and Bruce have loosened conventional notions of what their living spaces should be.

“When you set the stage with formula spaces and the rules that are imposed with that thinking, you produce formula experiences,” Megan says. “Instead, we wanted to break down spaces by experi-ences versus rooms and choreograph flow-ing connections between the spaces to create a very informal, comfortable way of living without concern regarding traditional expectations.” 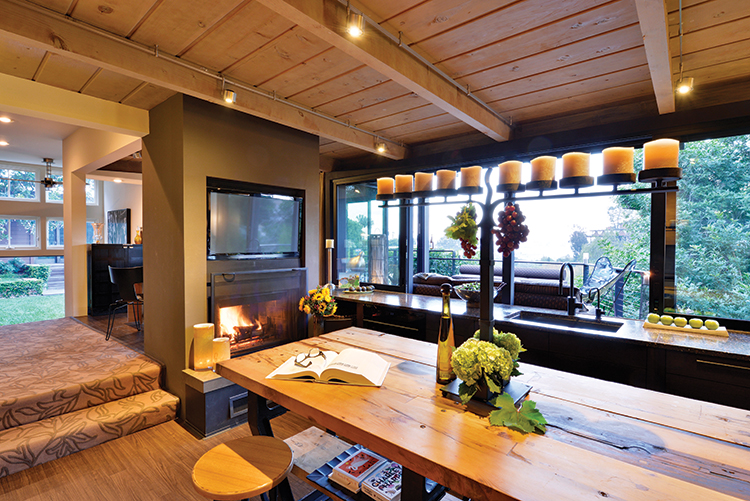 With an alleyway entry that makes the front yard seem like the back yard, the house always has been a bit topsy-turvy, which suits Bruce and Megan’s opinion that their home should function fluidly. As Bruce puts it, “Our house is organic; it’s always changing.”

Pliable indoor and outdoor spaces go beyond their ordinary callings. For example, take the courtyard, which is surrounded by a separate structure that is Bruce’s office, the main living areas of the residence, the master bedroom and bay views. This square space in the center of the action can serve as a garden or play area or surpass its regular duties to become a cinema under the stars, with the wall of Bruce’s office used as a backdrop for a screen and the office transformed into an open-air bar.

Entertaining has played a big role in Bruce and Megan’s lifestyle.

“When the kids were little, we were the big sleepover house. Sleeping bags covered every square inch of living space indoors and out,” Megan says. “But we couldn’t create the right experience with adult get-togethers. All the rooms were at dead ends. There was no continuous flow.”

The usual tendency for partygoers is to gravitate toward the kitchen, but that wasn’t the case at this house. When guests entered the front door and walked up the few steps to the dining area, the kitchen was invisible in its tucked-away, boxed-off space to the left of the stairs. Visitors also never ended up congregating in the living room. Even though that space was directly in front of them, they couldn’t see that the room offered knockout city and bay views through side windows. Instead, what they saw was a high-ceilinged room that seemed unwelcoming. When Bruce and Megan invited neighbors and friends over, guests inevitably bunched up near the top of the steps without venturing much farther. 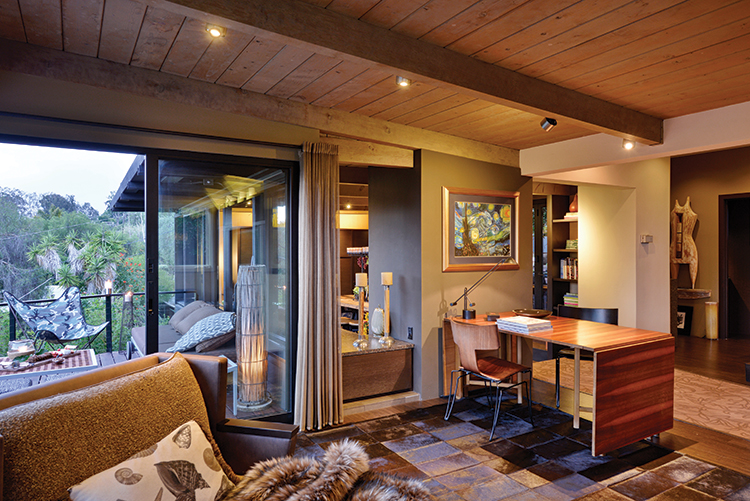 To improve circulation, open up spaces and create continuous flow, the biggest part of the remodel plan was to move the kitchen to the living room space, turn the former kitchen into a media room, delete the living room altogether and change the focus of the kitchen so that appliances,
prep areas, cooking and storage were not the items that drove the space.

“We wanted to deprioritize the living room and prioritize the kitchen as an infor-mal gathering space,” Megan says. “The size of the kitchen was doubled, and it became the entertaining area. All components that imply ‘kitchen’ were obscured. The Sub-Zero refrigerator, microwave, toaster oven and pantry were all hidden behind modern Tanzu-style casework, which now is the focal point from the entry door.”

The fireplace and big-screen television remained on the south wall to become part of the “nonkitchen.” A worktable, with a gnarly wood surface, seats eight in the center of the room. To the west, a black concrete terrazzo countertop with a black sink and faucet face the view through a new, 8-foot-wide window that, when opened, connects the indoor space to the cocktail deck. The previously fixed windows prevented an interchange between interior and exterior spaces.

“What gets me out of bed in the morning is the rush of flinging open the sliding window to let the sunlight pour in across the counters and to hear the cacophony of bird twitters and squawks from the canyon,” Megan says. “The view is nothing but treetops, all the way down to the water. We are voyeurs on the city. We can watch planes, hear trains, and see the freeway and cruise ships; yet the canyon is filled with mockingbirds, raccoons and coyotes.” 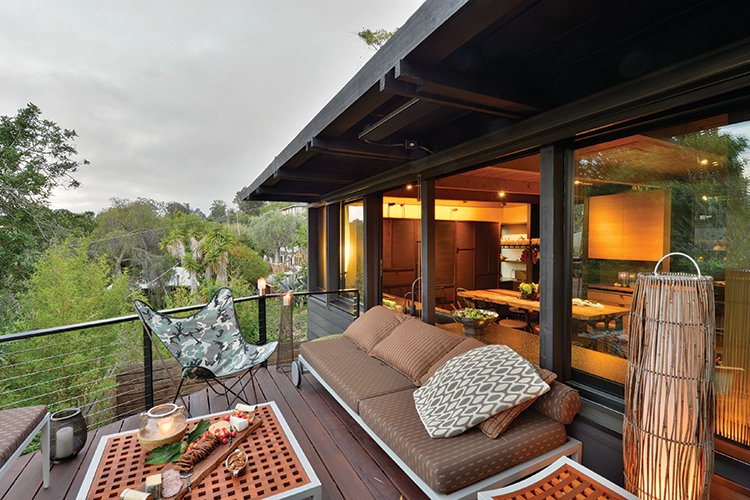 On the other side of the kitchen, two pairs of bi-fold glass doors were installed to lead out to a new deck, built on what had been a narrow, weed-laden side yard abutting the canyon.

“We designed several iterations of a dining area here, but could never figure out how to get enough seating to justify the expense,” Megan says. “Then the light bulb came on: Use the retaining wall as a seat wall and stair-step the space up the hill. Now we can seat up to 16 at the table. For larger parties, everyone piles up on the stepped seating. Ditto for the outdoor movies [now held here where outdoor heaters, a fireplace and a roof allow guests to enjoy films without having to deal with cold and dampness].”

Megan and Bruce like to change up dining spaces for parties. For appetizers and drinks, the cocktail deck off the kitchen and the courtyard leading to the front door provide congenial spots. Dinner options include the kitchen table for intimate gath-erings of six to eight people, the canyon deck for six to 16 guests, and inside formal dining for 10 at the expandable desk/table in the area between the kitchen and the stairs that lead down to the front door. 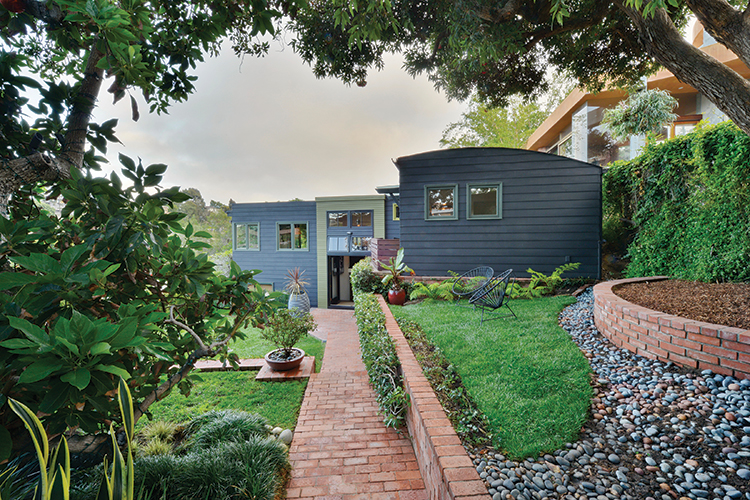 Getting rid of a closet on the other side of the desk provided space for a coffee/wet bar and a powder room. Adjacent to the bar, a stair landing that leads to the master bedroom acts as a seating wall. “In essence, we created a second kitchen-like gathering area,” Megan says.

One of her favorite additions is in the bath/shower near the powder room that opens to the new deck. “Without changing a thing, other than taking out the bathtub wall and replacing it with a bi-fold glass door, we now have an outdoor bath/shower, but better,” she says.

The new media room, where the kitchen had been, accommodates 12 to 14 individuals. “Oddly, we pack more people in this room than we did previously in the larger living room,” Megan says. “The funny thing about this cozy space is that everyone seems to feel more comfortable squeezing in cheek to cheek than they did gathering in a larger space.”

Without expanding square footage or moving walls, Bruce and Megan have managed to re-create their home to include open spaces, continuous flow and an inte-grated indoor/outdoor experience. That doesn’t mean the residence has become stagnant. Change continues. Down the stairs by the front door, the kids’ rooms that were converted into guest, music and TV rooms, may need another alteration. One of the spaces might become a nursery.

“Just as soon as all the kids moved out, our eldest got married and had twins. Stay tuned for our new line of designer baby gates,” Megan jokes.