San Diego owes much of its horticultural history to the Panama-California Exposition in Balboa Park, which marks its 100-year anniversary this year.

The well-established gardens in and around Balboa Park sprung from early city planners’ desire to show off San Diego’s enviable climate and favorable growing conditions.

On the northeast residential boundary of Balboa Park, the garden of a his-torically designated 1921 home honors that legacy. While a handful of original plantings remain, homeowner Robin Shifflet has — over the last 15 years — reimagined a colorful, water-wise landscape that complements the Prairie/American Foursquare-style home and the urban park on its vista.

“I wanted it to kind of look like Balboa Park, as if Kate Sessions had been here and she planted a few plants that she really liked from around the world,” says Robin, who is a licensed landscape architect and a development project manager with the City of  San Diego’s Park Planning Section. 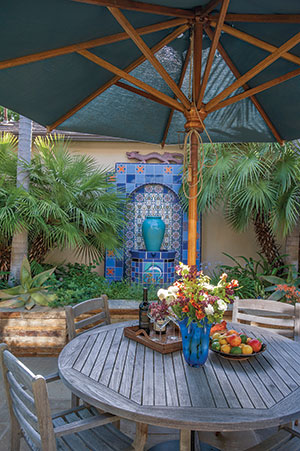 The North Park historical home is known as the Florentin Residence. Its construction was commissioned by Louis Florentin, a Spanish-American War veteran, laundry service proprietor and noted horticulturist. With original built-ins, tiled fireplace and glass-paneled oak front door, the property has views of downtown San Diego, Balboa Park (including the famed California Tower) and, on a clear day, the Pacific Ocean.

Robin’s plant preferences tend toward California natives, as well as favorites from New Zealand and Australia. Her water-conscious selections have evolved over time. While a grassy front lawn was nice for pets when she and her husband moved in, she eventually removed the turf for a sculptural mass of plantings, including varieties of agave, aloe, rosemary, flax and salvia. She replaced thirsty roses in a side yard with camellias and ferns as it became shadier under the canopy of a redbud tree, a lemon-scented tea tree and a tremendous Magnolia grandiflora. Planted by a previous homeowner, the magnolia ably deflects golf balls from the neighboring Balboa Park Golf Course, Robin says.

Robin installed a pathway from the side yard to the back yard with a random pattern of Elk Mountain sandstone from Wyoming. The sandstone also was used in the back yard to create garden walls and a patio area that steps down to give the illusion of a larger footprint. 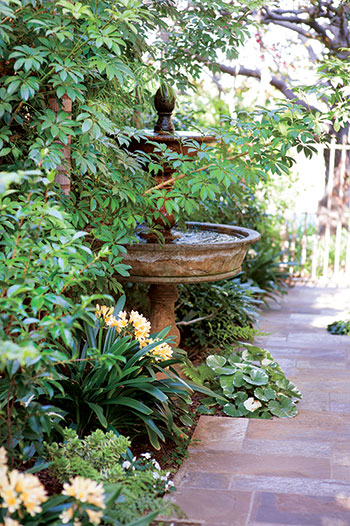 She was mindful that the modest size of her backyard garden put every aspect on display. As such, she saw opportunity in the massive blank wall of a 1970s-era garage adjoined to the original, Model T-sized garage. For the side of the more modern garage, she designed a fountain to replicate one she admired as a child visiting Catalina Island. Its decorative tiles echo those used in the 1920s. Flanked by Mediterranean fan palms, the fountain remains dry to avoid unsightly calcium deposits.

The original garage has new life as a garden room. With a vaulted wood ceiling and built-in bookshelves, the room has become a peaceful retreat.
“In the summertime, all the doors are open and it’s just nice to come out here to read,” Robin says. “It’s really relaxing. I found it’s kind of neat in a house to have another place to be. And going there makes you walk through the garden.”

Just outside the garden room is a pome-granate tree planted by the home’s original owners. The large tree doesn’t bear fruit, but offers a cascade of orange-red flowers with white edges.

Robin likes to play with color and scale in the garden. She mixes plants of green, purple, blue and white for contrast and doesn’t mind positioning a taller plant in front of one of smaller scale. This lends the garden a bit of mystery and compels you to peak around corners, she says. 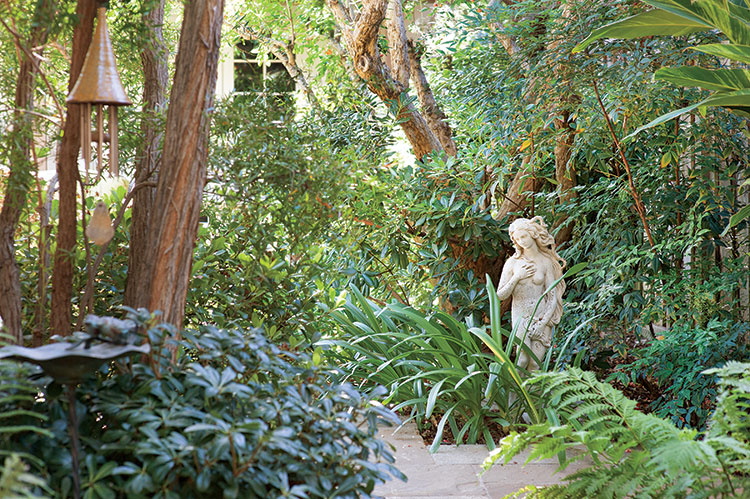 She prefers low-maintenance shrubs, like the Indian hawthorn as a backdrop for more ornamental plants, and natural shapes that don’t require frequent pruning.

“I didn’t want to create a garden in which you constantly have to trim or replace plants. That would be too much,” Robin says.

She puts considerable thought into the vignettes she sees from inside her home looking out. For example, she planted a fruitless olive tree just outside her kitchen window to frame her view of the back garden. Birds splash around in a fountain centered on the dining room window.

Passersby sometimes comment on the tremendous work that must go into caring for such a varied garden at a historical home. But after a day of shaping city policy on municipal parkland, Robin says gardening is a welcome diversion.

“I think that’s why I love coming home and doing this,” she says. “You get your hands dirty, and you can really create something.” ❖