When 300 tons of sand get dumped at the B Street Pier, no one should miss the beach over Labor Day weekend. Granted, you won’t be able to walk on it, but no matter: The real attraction will be mind-boggling works of art sculpted from granular particles and water.

Eleven “masters” are coming from around the world to parti-cipate in the U.S. Sand Sculpting Challenge. They include last year’s winner, JOOheng Tanfrom Singapore. Others hail from various U.S. states, Canada, Ireland, the Netherlands and Italy. Organizers are especially excited to have Ilya Filimontsev from Russia on the roster. 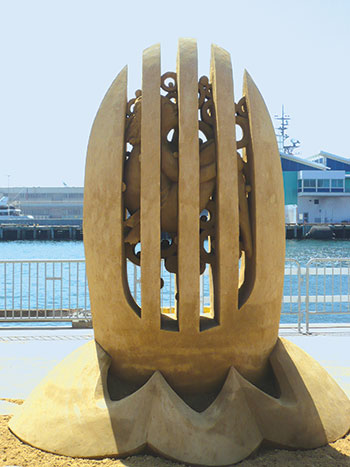 “This year, we have one of the strongest fields ever assembled on planet Earth,” declares Rusty Croft, whose responsibilities include managing the sand and judging. Rusty has competed in the challenge twice and won the grand prize and people’s choice awards in 2012. Then Gordon and Joyce Summer, producers of the annual event, asked Rusty if he was interested in running the challenge.

“I said, ‘Sure, if it means keeping it at this high level [of sculpting],” recalls Rusty, who lives in Carmel and who, like some other sand sculptors, has experience as an ice sculptor.

“I had a business [in Utah] carving ice for 15 years. I worked by myself in my freezer. Once you’re outside in public, carving sand on a sunny day, you just can’t go back,” he says of trad-ing power tools for shaping 300-pound, dense blocks of ice for hand trowels to finesse grains of sand into place.

Rusty works with sand sculptor Bruce Phillips of Carlsbad in running the San Diego event and partners with Kirk Rademaker of Santa Cruz in the Sand Guys company.

“We all know each other. It’s a big, international family,” Kirk says about himself and other master sand sculptors. “We see each other at different events. It’s sort of a seductive lifestyle. You have friends from all over the world. It’s a happy group. They’re all doing what they love.”

At this level, they also are pursuing a medium that turns them into performance artists.

“For most of my life, my art was hidden,” Kirk says. “I did it in my room and kept stacks of drawings under my bed. That introverted existence didn’t get me out in the world. Sand made me a social person and a TV person [among other appearances, he and Rusty
co-hosted The T ravel Channel’s Sand Masters], and I have been around the world.”

Although Gordon and Joyce are not sand sculptors, they (with Rusty) select the com-petitors, bringing some artists back and rotating others into the lineup.

“Joyce and I went to Virginia Beach after last year’s event,” Gordon says, referring to the Neptune Festival. “That event is 40 years old. We met possibly every top sculptor in the world there. That’s where we met Ilya.”

To attract the highest level of talent, they pay the artists travel expenses, lodging, meals and a daily allowance. Total prize money is $25,000, $15,000 of which goes to the master sculptors and the remainder to the California Carvers, a field of eight three-member teams.

“The sculptors have asked us to keep the prize money down and pay everybody appearance fees so that they all make out OK,” Gordon says. “The primary revenue source is ticket sales. We had 46,000 people on the pier last year. It was up considerably from about 35,000 the year before. This year, we expect 50,000.” 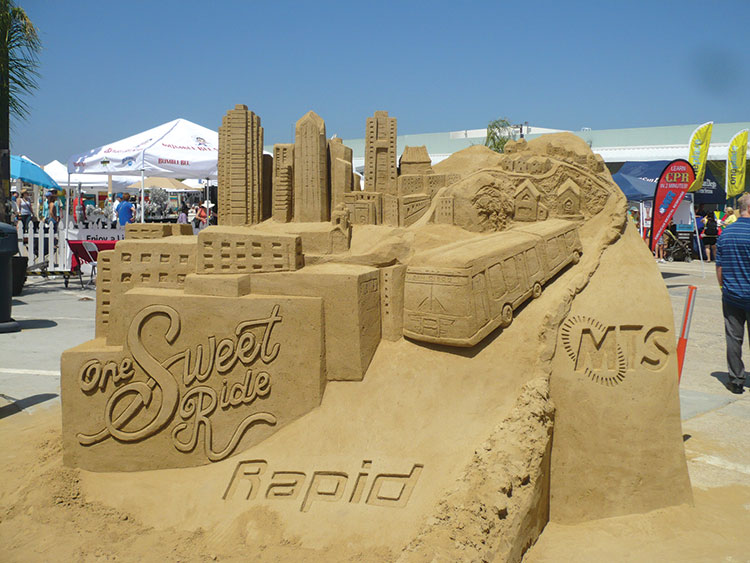 Gordon explains that he and Joyce became the event producers after their marketing consultancy business got involved in the Imperial Beach sand sculpting competition that ran from 1980 through 2011.

“For the last six years, we were responsible for bringing in sponsors,” Gordon says. “That event was run by a committee of IB citizens, and they canceled it after 2011 because the security charges were crazy. A couple of sculptors came to us and asked if there was any way we could continue the event.

“The big story this year is that the U.S. Olympic Committee is one of our sponsors. They will be here with their Road to Rio tour. We are going to theme the competition, asking the sculptors to get their inspiration from the Olympics over the years. Team USA will be here with big rigs and interactive elements. They’re kicking off the experiential marketing tour in two to four markets this year and will make a full circuit in 2016. They selected us to be one of the first stops.”

The sand-sculpting event’s other attractions include art vendors, food trucks, a beer garden, live music, children’s rides and a few sculptures that are created in tandem by the master competitors for corporate sponsors. 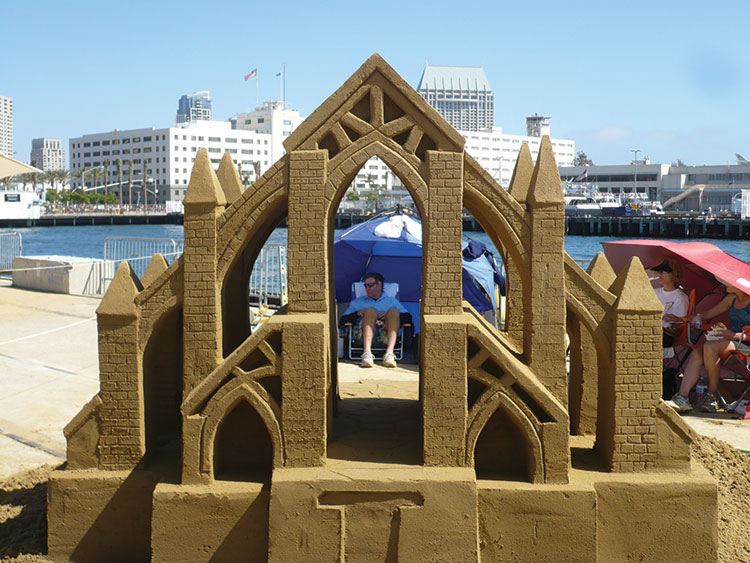 “Some of the artists come out early to work on those,” Rusty says. “They’re twice as big, made with 20 to 30 tons of sand [compared to 12 tons for individual sculptures].”

The masters get three and a half days to create their works. Teams get two days. Like artists in other mediums, they have individual methods.

“Everybody has their own creative process. Some people do sketches, some people do maquettes, some people wing it,” Kirk says. “You definitely need to have the technical skill that sand requires. You have to know how sand reacts to water and to trowels and other tools.

You have to love it so much that you just do it even for nothing.” You also have to accept the fact that the art you spend days creating will quickly disappear.

“There’s something that’s so free about working on some-thing that’s so temporary. It parallels life. Every morning, you step into a world that is ever changing, and you are going to do something that day and then it’s gone,” Kirk says. “It’s not about possessing them. It’s about making them.” ❖