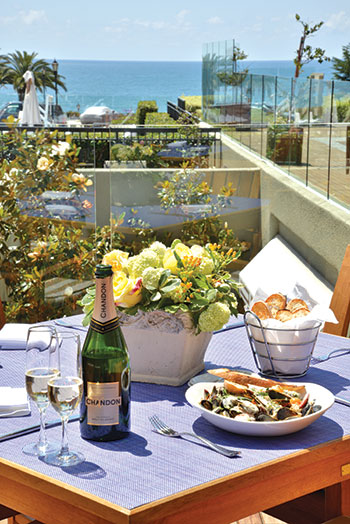 Better ideas are skipping off the wave tops as hoteliers realize that names really count. The open-air, seaview restaurant at L'Auberge Del Mar now is called Coastline and touts “Coastal Californian Cuisine.” L’Auberge blithely interprets this as encompassing blackened shrimp tacos with buttermilk-lime ranch dressing and Fresno chilies, described as “the classic San Diegan dish,” which it indisputably is not. The setting is enchanting, and servers agreeably pour extravagant bubbles by the glass
to accent the sparkling scenery.

UP THE COAST, “Hilton Carlsbad Oceanfront Resort” neatly packs together the who, where and what. But the new name “Cape Rey” is much sexier and alluringly Hollywood. It makes sense, because Los Angeles accounts for the bulk of San Diego County resort guests. GM Vikram Sood’s description of Cape Rey as “a beachfront basecamp for Southern California adventures” is masterful. Old pro Pascal Vignau remains in charge of the kitchen, but menu changes (and possibly a new name for the resort's restaurant, Chandler’s) are coming.

MILES AWAY on San Diego Bay, downtown’s Manchester Grand Hyatt has upgraded the former Lael’s to Seaview Restaurant, which does sound classically San Diegan. To celebrate the renovated, breakfast-only room, the menu suggests eggs Benedict with jumbo lump crab and avocado and the Seaview Sunrise, an eye-opener whose marquee ingredients are peach vodka and raspberries.

CHEF GIOVANNI NOVELLA crafts his own mozzarella and says that “it’s never richer or more flavorful than in April and May, when the cows in California are eating flowers.” Even in July, his cheese tastes exceptional to patrons of Stella Public House, the newest East Village Italian dining venue. The chef stuffs mozzarella, ricotta and ham into zucchini blossoms that he then batters, fries and sends sizzling over pesto on plates strewn with flowers. They are swoon-inducing, as is his caprese of thick-cut, richly ripe tomatoes, mozzarella, house-grown basil and pesto. If the flavors sound repetitive, reruns like this are very welcome. The pizza oven turns out dashing pies; Giovanni’s own filling favorite boasts mozzarella, roasted fingerling potatoes, herbs and a medley of mushrooms. “Delicate but hearty,” remarked a guest who finished it off with little effort. In Northern Italy, chocolate “salamis” are a favorite sweet. The chef makes his by rolling dark chocolate with bits of honey biscotti.

IT’S ALL IN THE FAMILY at South Park’s estimable Buona Forchetta. Chef/proprietor Matteo Cattaneo, whose cooking produces patient lines most evenings, likes giving special names to important items. His new catering truck honors Dante, the family dog; and the truck’s custom, Italian-made pizza oven is engraved with the name of daughter Sofia. In a city smitten with savory pies, Matteo’s are at the top. 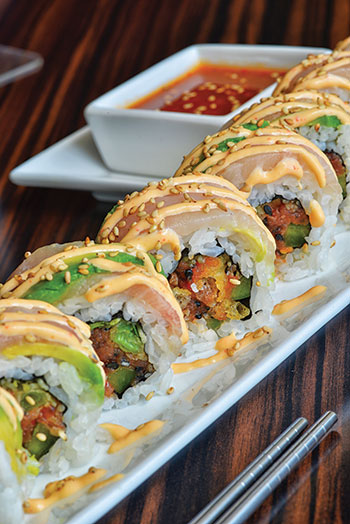 THE SUGGESTION TO PAIR Puesto’s new spiked, cinnamon-sprinkled horchata with the inventive restaurant’s crispy, melted-cheese tacos was rummy. The two get ornery when tasted together. But the sweetly refreshing rice beverage that is a standard in Mexico makes a fabulous dessert, thanks to the addition of handcrafted, small-batch white rum made by San Diego’s Malahat Spirits Co. The firm is named for a liquor-running ship that hovered safely offshore and kept San Diego lubricated during Prohibition. San Diego’s leadership in brewing — and now distilling — is another way the city looms large on the national map. ❖