Annual holidays at their Mission Bay vacation home convinced Dick and Bobbie Vandervoort to retire here, but the Chicago couple knew they wanted a quieter neighborhood.

“Bobbie looked at 80 homes, and I saw at least 50 before we found this one,” Dick recalls, standing in the kitchen of the Bankers Hill house they bought in 2005.

The former 700-square-foot bungalow had been remodeled into a sleek two-story with sunny patios. After a few years in residence, the couple replaced and expanded the L-shaped rear deck shaded on one side by a decades-old weeping fig. 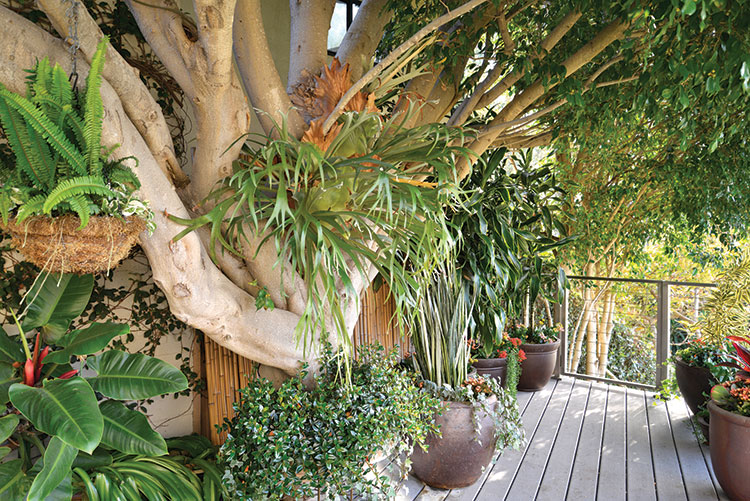 A retired executive and hobby photographer, Dick spends considerable time on the deck, occasionally manning both barbecues in the outdoor kitchen. But he rarely enjoyed the view across the overgrown “jungle” that ran riot down the steeply sloped back yard.

“The landscaping really wasn’t appropriate for the area, and we worried about erosion,” he says. “It had to go.”

When an initial effort to shore up the slope fell short, Dick and Bobbie turned to a trio from Escondido’s Columbine Landscape Inc. — President Mark Sterk, Emilio Gutierrez and Nicolas Shellhammer — to solve the site problems and create a new garden.

“Not just gravel and cactus,” Dick says. “We wanted lots of color.” “And hummingbirds,” Bobbie adds.

While succulents star in the new terraced garden, they thrive alongside lush flowers and foliage, including king palms, bamboo, pittosporum and other mature screening and shade plants the couple opted to keep. In the eye-catching mix are ‘Ruby’ ti plants, bold bromeliads, arching foxtail ferns, feathery coral fountain and gold-flowered anthemis. 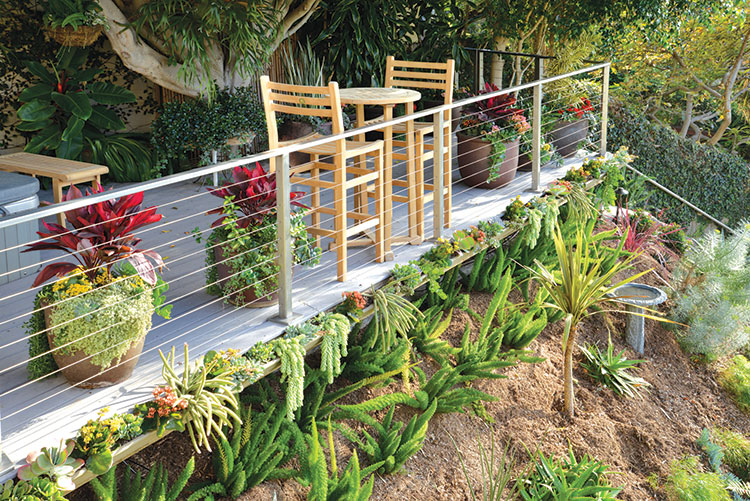 “We call it ‘dry tropical,’” says Nicolas of the increasingly popular style. “It’s colorful and water-wise without that Scottsdale [Arizona] look.”

The five-month makeover started with a labor-intensive cleanup that removed overgrown plants and long-hidden construction debris. The Columbine team then buttressed the slope with six curved, concrete-block retaining walls and engineered drain and irrigation systems to manage water use now and as the garden matures. In the process, they renovated a patio once buried by eroding dirt and added landscape lighting.

Custom drip irrigation was installed to water the garden’s 17 containers while preventing water damage to the deck and pots.

To soften one edge of the deck, a gutter was transformed into a planter for succulents, including some like burro’s tail to spill over the sides. Deck pilings were cloaked with giant honeysuckle vines and the ter-races planted with spreading succulents and shrubs.

“You won’t find any typical groundcovers here,” Mark says. “Most of them fail and turn into maintenance nightmares.”

The Columbine crew also planted a streetside fern pine hedge, replacing sidewalk-damaging ficus, and refreshed plantings in the patio off the kitchen, cloaking a bare wall with a cup-of-gold vine.

Now when Dick and Bobbie relax on their deck, they delight in the growing garden, especially the new birdbath regularly filled with fresh water via the irrigation system.

“The birds are loving it,” Bobbie says. “It’s as if they tweeted the news around the neighborhood. Some days they splash and drink it dry.”