One need not be clairvoyant to declare that a majority of Americans will enjoy a barbecue on the first Saturday of this month. According to the Hearth, Patio & Barbecue Association, Independence Day even beats Memorial Day for the proliferation of a characteristic aroma that fills back yards across the nation.

Conceptually speaking, hosting a barbecue seems easy enough. You don’t have to set an elegant table, spend hours making delicate canapés or worry about guests spilling drinks on your furniture and floors. But when it comes to the finer points, clearly a backyard party deserves careful planning and execution.

Jeff Rossman, chef/owner of Terra Bistro and Catering and author of the new BYOB: Build Your Own Burger, suggests tying together elements of food, beverage and décor with a theme such as south of the border, Hawaiian luau, western or day at the beach. Or the theme could be matched to a popular movie, a musical era or a foreign country.

The standard Fourth of July barbecue calls for red, white and blue. If you have a trellis, you can hang string lights in those colors or use a string of mini flags. Think all-American for serving dishes and glasses.

“A lot of people use Ball glass jars for drinks,” Jeff says, adding that there are plastic replicas of the canning jars for poolside use.

For a specialty Independence Day cocktail, Jeff suggests a watermelon margarita. For a spiced version, you can infuse tequila with jalapeño or chipotle peppers a couple of days in advance.

While the ambiance is an important consideration, your primary focus should be on gauging how you will handle the amount of food you’ll be grilling and timing the cooking. “Rub or marinate chicken in the morning and slice vegetables the day before,” Jeff advises. “Do as much as you can before guests arrive so that you are working only on hot food while you are entertaining.

“Have plates, glasses, napkins and utensils at the ready so you’re not scrambling for them while you’re trying to cook,” he adds. “Be prepared and plan!” Also, be sure you have enough platters to keep raw foods and cooked foods separated.

Assuming you have limited grill space, you’ll want to cook vegetables first, since they can be served “room temperature.” If you’re cooking chicken and burgers, put the chicken on first since it takes the longest.

“You also want to consider how you’ll keep everything warm,” Jeff says. “Think of your grill as an oven too.” You can move food up on the rack so
it’s not getting direct heat and then close the lid. Or you can wrap it in foil and transfer it to your kitchen oven (heated to 200 degrees and then turned off) or a warming drawer.

While burgers are the most ubiquitous of barbecue offerings, grills just want to have fun too. If you’re hosting a small number of people, you might invest in prime cuts of filet mignon. If your guest list is large, chicken can be a versatile choice.

If you opt for poultry, Jeff recommends steering clear of chicken breasts because they will dry out. Instead, use bone-in dark meat, like legs or thighs. They’re moister, and the bone retains heat.

You can apply a dry rub or chimichurri sauce before cook-ing, but wait until the chicken is three-quarters of the way cooked before adding a teri-
yaki, hoisin or barbecue sauce. “The sugars will caramelize and burn,” Jeff warns. 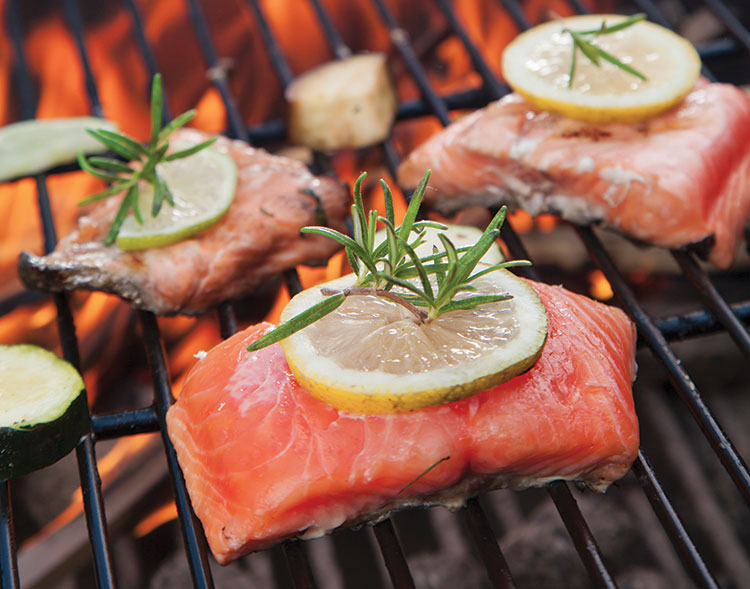 Fish can be tricky, because it sticks to the grill. Oil will carbonize on the grill; so after seasoning, spritz fillets with a pan spray. The best candidates for grilling are meatier species, such as swordfish, shark, mahi mahi, salmon and sea bass. Shellfish — including shrimp, lobster, mussels, oysters and clams — also work well.

Vegetables that adapt well to grilling include soft squashes, eggplants, peppers and tomatoes. You can skewer them to make kabobs (perhaps interlacing them with fruit like pineapple), but Jeff likes throwing them right on the grill and then drizzling them with balsamic vinegar. Thin and round vegetables such as asparagus spears will fall right through the grates, but you can always put such items in a grill basket.

Jeff points out that you don’t need a pizza oven or smoker to enhance your menu.

“The trick with pizza is that you have to watch the flame, because it will grill the pizza in seconds,” he says. Keep burners on one side of the grill turned off. Grill the dough on both sides, then move it to the side that’s turned off. Put the toppings on and close the lid to finish the pizza without burning the crust.

For smoking, put apple wood, mesquite or hickory chips in a packet of aluminum foil, leaving an opening in the top. Put the packet between the deflectors or directly on lava rocks. When it begins to smoke, turn down the flame. Put your food on the rack and close the lid.

Bear in mind that your food will continue cooking with the lid closed, Jeff notes. So if you want medium-well burgers, cook them to medium-rare and then put them on the rack. Salmon can be cooked just until it gets grill marks and then be moved. Chicken, on the other hand, needs to be cooked all the way through, until the internal temperature is 155 degrees.

Follow these tips and chances are your guests won’t be left wishing they were with the grill next door.