A Cardiff home blends styles, but most importantly gives the homeowners plenty of opportunity to enjoy the California lifestyle

Originally from the East Coast, Sue loves the Cape Cod/Nantucket style. James, from California, likes cleaner lines. “So we tried something that would blend both styles,” Sue says.

As the architect of their custom home in Cardiff, T race Wilson says he combined “traditional Northeast sensibility with California Craftsman and modernity to create a place that’s really an open, airy environment.”

The couple were living with their two daughters, ages 14 and 11, on the low side of the canyon in Cardiff when they found their new property.

“My main motive was to have more outdoor living space for the kids,” Sue says. “James’ motivation was to have a view. We stared at this lot from our bedroom and wondered what it would be like to be on the other side of the canyon.”

The property had a 1950s house on the front two of its three parcels.

“We reserved the front parcel as open space for the kids and two Labrador retrievers,” T race says. “I am very keen on how all the spaces take advantage of various views and sun angles.”

Trace designed the landscaping, which includes a collection of fishtail and other palms, mature Ecke Ranch poinsettias already on the site, butterfly bushes, lavender, sage, artichoke and a variety of drought-tolerant plants. T rees include olive, tangerine, lemon, lime and Valencia orange.

With the front door open, a guest is greeted by an unobstructed view to the back deck and a neighbor’s large Italian stone pine tree — used, T race says, “as a set piece.”

Inside, a great room sweeps across the expanse from kitchen to dining room to living room.

One of the key aspects of the open design is how spaces are defined through patterning in the ceiling. 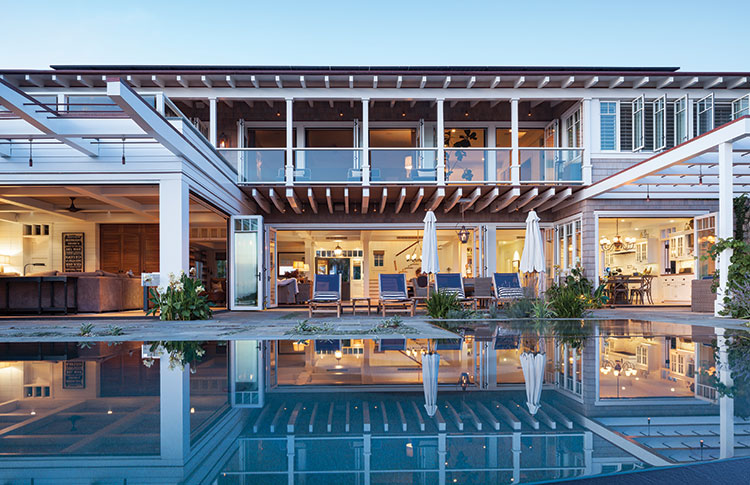 “Our contractor tried to convince us not to do wood on the ceilings and walls, but I had seen it in magazines and was really adamant,” Sue says. “Whether it was about gas lanterns or wood, Trace would make it happen for us. I like the feel of wood instead of drywall. It just feels warmer, especially if you do a lot of white.

“I also wanted lower ceilings for the great room,” she continues. “T race dropped them with beams so it would seem cozier.”

While Bon·Bon owner Rosemarie Houston worked with Sue on the interior design, T race refers to Sue as “the quarter-back” of the house. Both she and James had specific ideas.

“We didn’t want to feel like we were in a massive house,” Sue says. “There’s no wasted space. Everything T race constructed we use.”

“I always stressed functionality — everything from cupboard space to rooms,” James says. “I was really adamant that everything we put in would be usable.”

With bi-fold glass doors open, the American oak floor of the great room tran-sitions to an expansive patio with blue-stone pavers to a pool with an infinity edge all the way around.

The west end of the house, behind the living room, features a cozy family room with a beach-stone fireplace. Here the ceiling is sawn cedar, but white beams provide continuity with the great room. Convenient to the pool, an adjacent bathroom features a stacked pebble-wall shower. Glass doors on the two outer walls of the family room open to the outdoors.

On the east end, behind the kitchen, lies a trellis-covered outdoor lounge with a fireplace and kentia palms original to the property. 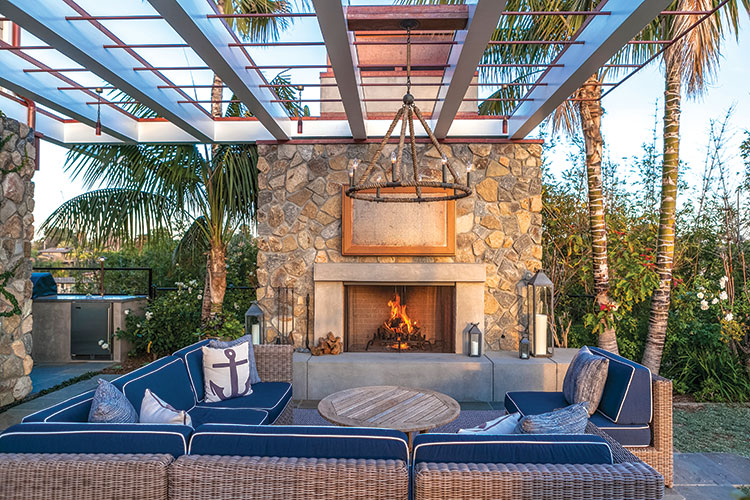 Along the east side of the house, just off the kitchen, are a barbecue station that includes a smoker, a raised vegetable bed and an herb garden. Sue and James’ daughters enjoy roasting marshmallows in the fire pit under the shade of a jacaranda tree. Toward the front is a dual outdoor shower: One side is where James rinses off after surfing (board storage is incorporated into the side of the house) and the other is for washing the dogs. The side yard offers access to the kitchen, laundry room and butler’s pantry (convenient for caterers).

“Everything is programmed so that you don’t have the ubiquitous side yard that has no value,” T race says. Even the fence serves a purpose: supporting grapevines.

Another important element in the exterior design is access to the second level by stairs along the garage in front and beyond the family room in back. Inside, the L-shaped stairway is centered in front of the great room.

At the top of the stairs are the girls’ bedrooms; a second laundry room; a guest suite; and James’ office, which opens to a deck over the garage. Built-in walnut cabinets, a window seat, a coffee bar, grass-cloth wallcovering and a round table in lieu of a desk keep it looking more “homey” than strictly business.

To the right of the staircase lies a casual “retreat” that opens to a deck running all along the back of the house to the outdoor stairs on the west end.

Also opening to the deck with a wall of glass doors is the master bedroom. Lending coziness are a large fireplace and wool carpeting.

Step into the master bathroom, however, and the feel underfoot changes.

“I wanted it to be like walking on the beach,” says Sue, who chose off-white pebble flooring for the spacious, white- and light-filled area with Carrara marble countertops and tub surround. For balance and warmth, she opted for hemp grasscloth wallcovering. James’ favorite aspect of the room is his ability to view the surf while showering.

The bathroom opens to an even wider expanse of the deck, where a stone fireplace makes it easy to enjoy watching the setting sun from a higher vantage point.

“During summer, I think we spend 80 percent of our time outdoors,” Sue says.