Kitchen of the Year: Modern Zeal

From time-honored classic to trendsetting modern, these winning kitchens sizzle

By tearing down walls and adding folding glass doors that sweep open to an under-the-sky courtyard, designer Donna T ran of Borrelli Design + Cabinetry unleashed a Point Loma kitchen from its boxed-in position between dining and living rooms.

“The new kitchen reflects the California lifestyle,” says Karl Gobel, who owns the home with Chris Olstad. “It’s open and inviting and is the nucleus of the home. It interacts with the outdoor space, the formal living room and the dining room all
at the same time.”

A striking mix of contempo-rary and Mid-century Modern styles, the kitchen features dark melamine cabinetry that takes its cue from the finish on the original redwood ceiling beams, which were kept intact.

“Karl’s family were the devel-opers of the 1975 home, so we wanted to preserve some of the home’s history,” Donna says. “The entire residence was clad in redwood, but it made the home feel smaller and dark. We took it all out, except for the ceiling beams, and repainted
the walls to make it brighter. The sapele veneer on other cabinetry matches the redwood that used to be there.”

Warm earth tones and clean lines attune to a Mid-century Modern feel. The streamlined, linear take was juxtaposed with stainless-steel appliances and the industrial feel of a steel truss that runs across the ceiling between the dining room and kitchen, as well as else-where in the home. 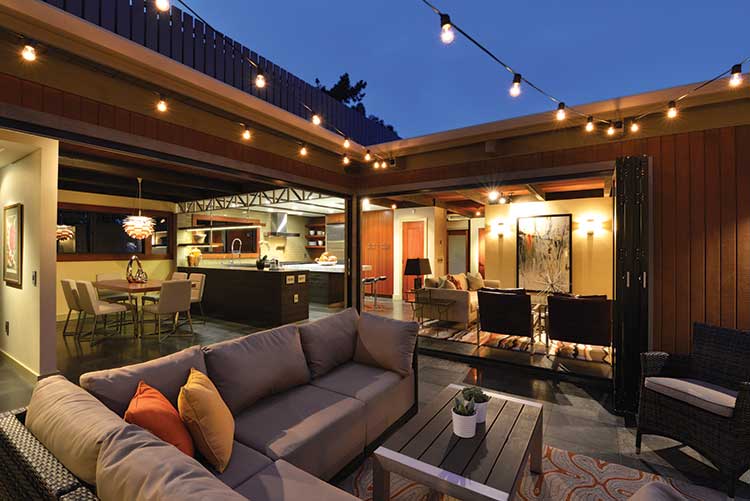 “There was not a whole lot of detail, so we needed something to be more graphic and bold in the kitchen’s design,” Karl says.

Carrara marble countertops on the island contrast with peri-meter countertops in limestone made to look like concrete. The limestone’s deep-leathered finish maintains warmth, while the stone echoes the flooring.

“The floor is gray graphite Egyptian limestone that we chose for its uniformity,” Karl says. “There is quite a lot of it, including on the outside living space, the front porch and the master patio. It was something we found that would create a solid look without having to switch to something man-made. The house is in a wooded area of Point Loma, so we didn’t want to get too far away from a natural feel in materials.”

When the remodel was com-pleted, with the kitchen being the largest transformation of the home, more than 80 guests came to the housewarming party. Invitees, none of whom had been let in on the remodel-ing process, lavished praise.

“We got just what we wanted: a dramatic, grand reveal,” Karl says.