Balancing on a teeter-totter between modern and Mediterranean style interpretations, a hilltop Point Loma residence’s makeover could have tipped in either direction.

“Originally, the house was a nice, kind of streamline modern home from the ’30s,” says Doug Simon, the architect who was retained for the redo. “I would have gone on that way with the remodel — I’m a modernist at heart — but the homeowners wanted a traditional Santa Barbara style. So I jumped in with both feet and took a few trips to Santa Barbara [where Spanish-style architecture is epitomized].”

When Julie and Bruce Borcher bought the home, it was a one-dimensional, flat box. Adding balconies and ornamental wrought-iron railings, along with juxtaposing heavy stone and hand-painted Talavera tiles on exterior staircase risers, stepped up the Spanish character.  “I think traditional Mediterranean style is beautiful and timeless,” Julie says. “It was not too difficult to integrate that style into what the house had. We love simple Spanish architecture and design elements like the tile.”

The couple also were smitten with the 180-degree view across San Diego Bay. The front of the three-story home looks southeast toward the Kona Kai Marina, Coronado Naval base and beyond to downtown, which is framed by the Cuyamaca Mountains. On the west side, the ocean beckons. To capture the sweeping panorama, large expanses of glass were installed wherever possible. Switch-ing out windows made a huge difference and required only minimal revision compared to the floor plan quirks that needed fixing. 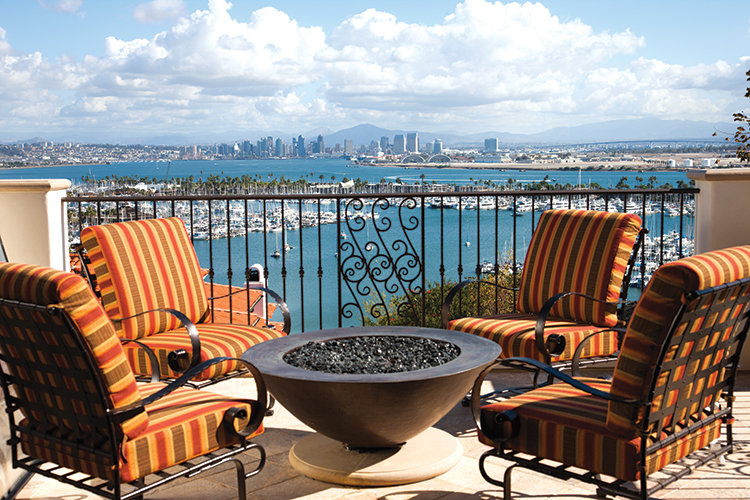 “It was almost impossible to get up the steep driveway into the garage without bottoming out your car,” Doug says. “The lower level was buried in dirt like a bunker. The family room downstairs felt subterranean, and there was seepage. We pulled away the dirt, unburying the downstairs, and made a small patio area. We installed a rusticated double door that leads to the new media room. The media room, which has a wine cellar, bar and bathroom, also connects to the garage.”

To resolve any confusion between the media room entry on the first floor and the home’s primary entry on the second floor, a small wrought-iron fence and gate redirect guests up stairs to the front door. Open the front door and a burst of color animates the interior.

“It was important to me that the foyer not be just another neutral space,” designer Joan O’Haver says. “Right away I brought in all the textures, color, carved woods and ironwork that I carried throughout the house. The clients wanted vibrancy in each room.”

Although a neutral palette serves as background in most rooms, accents of persimmon, cobalt, vermillion and gold — borrowed from Julie’s Fiesta dinnerware collection — spice up the spaces. In the living room, through an arched opening on the east side of the foyer, exuberant patterns on rugs, draperies, furniture, throw pillows and fireplace tiles play together in swirled wonder.

“I love to mix patterns,” Joan says. “A lot of people are afraid to do that; but in the right scale, it works out fabulously. If you have the guts to do it, it’s what you’ll remember the most.” 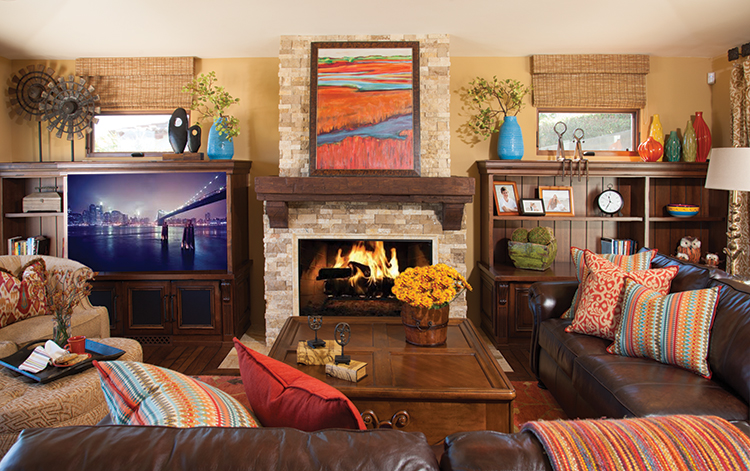 The living room speaks more formally than the great room on the west side of the foyer. Here, at the heart of the home, Julie and Bruce were more interested in comfort, plenty of seating for family and guests, and dog-friendly materials (they have a big yellow Lab, a medium-sized sheepadoodle and a little Havanese, so Julie jokes they are like the bear family in the Goldilocks fairy tale). Artwork and a fireplace of stacked travertine introduce a hint of modern sensibility to the space. The mantel’s wood beam echoes ceiling beams in the adjoining kitchen, where distressed, glazed cabinetry adds depth and warmth.

“Bringing in the beams for the kitchen was tricky,” Joan says. “When I ordered them, I envisioned beams that would be hollow on the inside. What I got weighed 800 pounds — too heavy to even set on counters, as they would have crushed the lower cabinets. We made it work, though. The contractors cut away the inside of the beams, chiseling them.”

Glass doors in the great room and living room lead to patio spaces saturated with glorious views from the southeast side and, from the opposite side, to the tiered back yard with seating areas and fountains on the second level; a spa, pool and cabana on the third level; and a grassy area for dog play on the fourth.

There was little connection from the house to the pool, so Doug submitted a concept to Bruce and Julie for a bridge going from the second level to the pool. 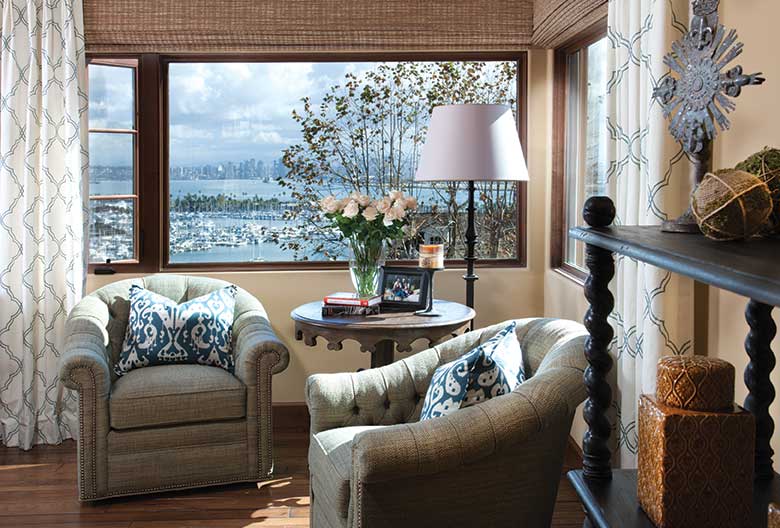 “When I presented the idea to them, Bruce said, ‘That’s exactly what we were thinking,’” Doug recalls. “So we did a nice Santa Barbara Spanish Revival-style bridge.” Room for the bridge was achieved by taking space from one of the three bed- and-bath suites upstairs. “The bedrooms are like jewel boxes,” Joan says. “They are pretty small, but each has its own character and is very comfortable.”

Accessible from the upstairs hallway and located on the other side of the catwalk, an outdoor kitchen balcony entices. With living-room comfort; cozy fire-pit warmth; and an awe-inspiring vista of yachts back-dropped by palm trees, the bay, downtown high-rises and mountain peaks, it’s the spot that shines as the hands-down favorite area to linger.

“We’re from Arizona,” Julie says, “so we get a lot of company. They all come up the exterior stairs and turn around to ooh and aah. Then they go to the upper deck, where you can see forever, and say, ‘I would spend all my time out here if I were you. Can I sleep out here?’”